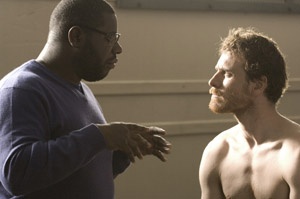 Prior to "Hunger," the most recent film to revolve around a protagonist planning to take his own life was "Seven Pounds." There, Will Smith played a widower so consumed with overwhelming regret about accidentally killing his wife that he decides to search for deserving strangers to leave his organs to upon his demise.
Here, we have a fact-based bio-pic recounting the suicide by fasting of Bobby Sands (1965-1981), a latter-day revolutionary who led an Irish Republican Army (IRA) hunger strike at Long Kesh Prison located in Northern Ireland. Bobby and nine of his comrades would perish while behind bars in pursuit of elevating their status to political prisoners so that they would no longer be treated like common criminals.
Curiously, this empathetic portrait was the brainchild not of an Irishman but of Steve McQueen (no relation), a Black Brit born in London. McQueen makes an auspicious writing and directorial debut with this gritty IRA saga which measures up with the best of the genre, including "In the Name of the Father" (1999), "Omagh" (2004) and "The Wind That Shakes the Barley" (2006).
The late Sands is played by the appropriately emaciated Michael Fassbender, who only grows more gaunt-looking as the plot marches inexorably towards its grim end. En route, we see Bobby and company being repeatedly Abu Ghraibed by their sadistic guards, clean freaks who seem as intent on keeping the inmates bathe as in making them squeal. However, the hypocritical goons don't apply the same sanitary standards to themselves, since they are caught reusing the same latex gloves during both anal and oral cavity searches.
Before Bobby embarks on the fast, he engages in a lengthy philosophical debate with Father Moran (Liam Cunningham) about the ethics of his plan in an uncut, 17-minute scene shot courtesy of a continuously-running camera. Obviously, the priest fails to convince the willful rebel that God doesn't want him to die, and the balance of the flick is devoted to watch the cult hero slowly waste away.
A fitting, posthumous tribute to a martyr who freely sacrificed his own life to highlight the horror of man's inhumanity to his fellow man. Let's just pray this incendiary flick doesn't reignite civil unrest in the region.
Bobby Sands, he's a goner, but to Bobby 'twas an honor.

To see a trailer for Hunger, visit:
http://www.youtube.com/watch?v=dmVPCX0LxN8