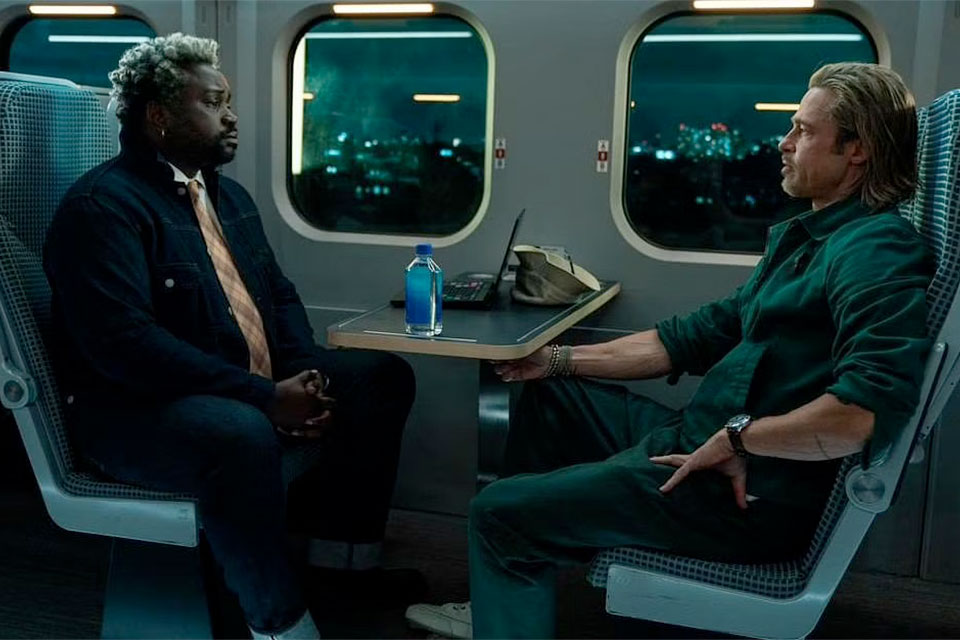 “Fate will do what it wills,” says The Elder. But what happens when fate turns out to be a series of unpredictable and ultra-violent events aboard the world’s fastest train?

The basis for this cutthroat railroad trip is a book by the very popular Japanese novelist Kôtarô Isaka. Hence the setting and situation. Ladybug (Brad Pitt) is an operative who’ll steal or kill whatever you will. Dogged by a sense of terminal bad luck and negativity, he’s seen the light and wants to start afresh. Wants to be positive and spiritual. But his current snatch and steal assignment, aboard a bullet train hurtling from Tokyo to Kyoto, pulls him right back into the darkness.

On this mission, he has unwanted company. Other hitmen, assassins, thieves and killers with similar or conflicting goals. There’s The Twins, Tangerine (Aaron Taylor-Johnson, Tenet) and Lemon (Brian Tyree Henry, TV’s Atlanta), they don’t look alike but kill alike. Ladybug confronts Lemon: “You don’t remember me?” Lemon, “You look like every white homeless man I’ve ever seen!”

The gangster Kimura (Andrew Koji, Snake Eyes: G.I. Joe Origins), a grieving dad, has been forced to commit a crime. The grudge-bearing murderous Wolf (Benito A Martínez Ocasio, aka Bad Bunny), is really pissed off: “I’m going to ruin your life the way you ruined mine.” The Hornet (Zazie Beetz, The Harder They Fall), an assassin, would murder anyone for money. And Prince (Joey King), a petite, innocent looking girl dressed in pink, is the biggest psychopath in the bunch. Apparently, there isn’t enough room on this shinkansen (bullet train) for everyone. Some won’t make it to their final destinations. Refunds anybody? 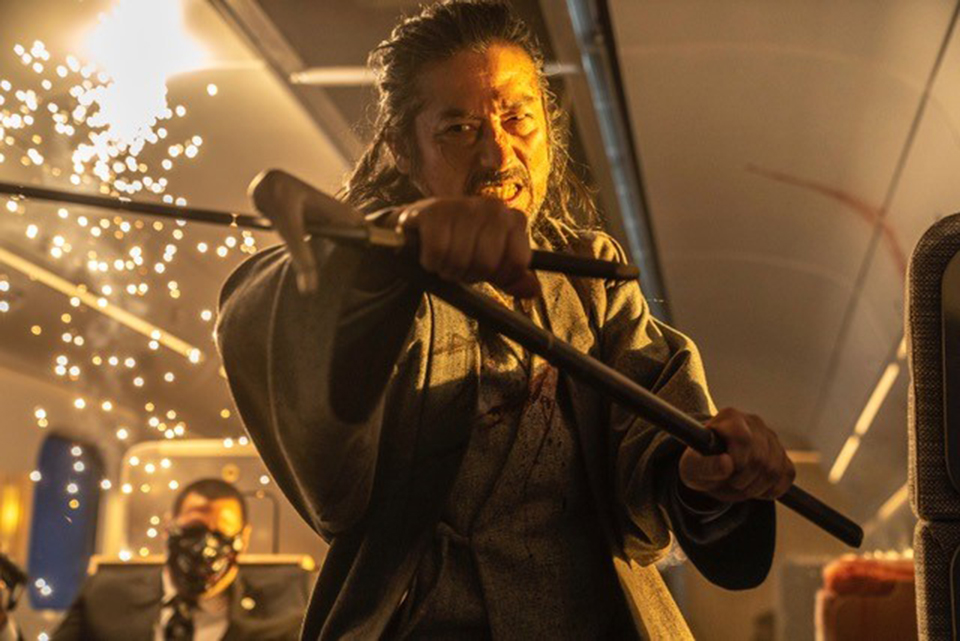 This film adaptation, by screenwriter Zak Olkewicz, is a blessing and a curse. It creates, builds and lights the fuse on this Molotov cocktail. But the script’s overabundance of characters, dips in momentum and protracted ending don’t help. Director David Leitch, whose filmmaking instincts were near perfect on John Wick and Atomic Blonde and not so much on Deadpool 2, knows how to showcase brutal acts. But he stages fight scenes like they’re self-contained entities awkwardly chained together. They don’t flow. That was his approach to Deadpool 2. Conversely, Tim Miller, the director of Deadpool, shot that movie like it was a music video or a commercial. Never a seam, a break in rhythm or wasted time. Scenes melted together. Miller’s style would have served this film well.

This time out, Leitch’s ingenuity overshadows the directing flaws. It’s obvious that the train cars are nothing more than sets. Normally actors would perform in front of a green screen, which would later be filled in with background footage. In this case, Leitch and his tech crew (cinematographer Jonathan Sela) filmed the Japanese countryside aboard a train. They projected that footage on LED screens. So, as the cast punched, kicked and shot guns, real visuals in real time backed them up. If you can’t film on location, this method is a valid alternative.

The technical trickery, visuals and sounds are cool as hell. Production designer David Scheunemann, funky costume designer Sarah Evelyn, set decorator Elizabeth Keenan and art directors Richard Bloom, Chris Farmer and Nicolas Plotquin should take a bow. Composer Dominic Lewis deserves praise too, along with the eclectic playlist that includes the boisterous “I Just Want to Celebrate” by Rare Earth, Alejandro Sanz’s pushy “La Despedida” and the sublime “Sukiyaki” by Kyu Sakamoto. Hard to add editing (Elísabet Ronaldsdóttir) to the honor roll as the film’s momentum slumps so frequently and at times the 2h 6m length of this act/com/thr feels interminable. Blame the cutting. Blame the script. 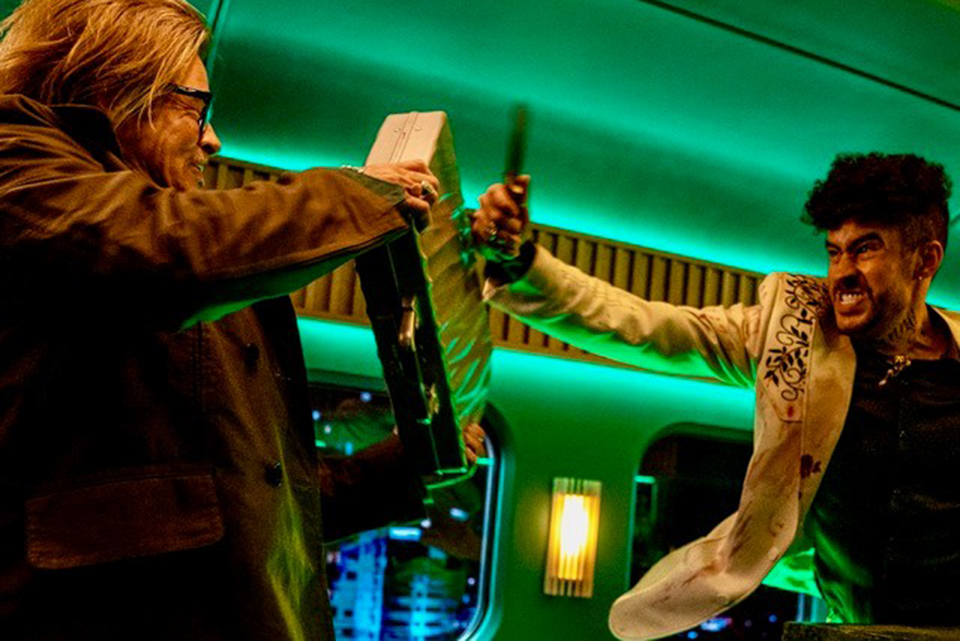 Pitt is cool, charming and laid back. He must have felt extra relaxed being directed by Leitch, his former stunt double. He’s so blasé as Ladybug, it’s like he’s casually invited viewers to a treasure hunt that descends into violent depravity, then goes totally berserk. The aforementioned cast is game for whatever. Sandra Bullock as Ladybug’s boss, Hiroyuki Sanada as The Elder and Michael Shannon as a real bad mother----r add spice and hot sauce to the mix.

Leitch’s allegiance to Guy Ritchie (Snatch) and Quentin Tarantino (Pulp Fiction) is manifested in the snarky blend of violence, intrigue, grudges, crazy hitmen, gruesome murders and excessive flashbacks. His storytelling is long-winded, too. Just like theirs.

It may take audiences a minute to digest the mayhem they’ve witnessed. With reflection they’ll recollect the comic, kinetic bedlam—and the tediousness too. Will they go back for repeat viewings? Hard to know. Providence will do what it wills.