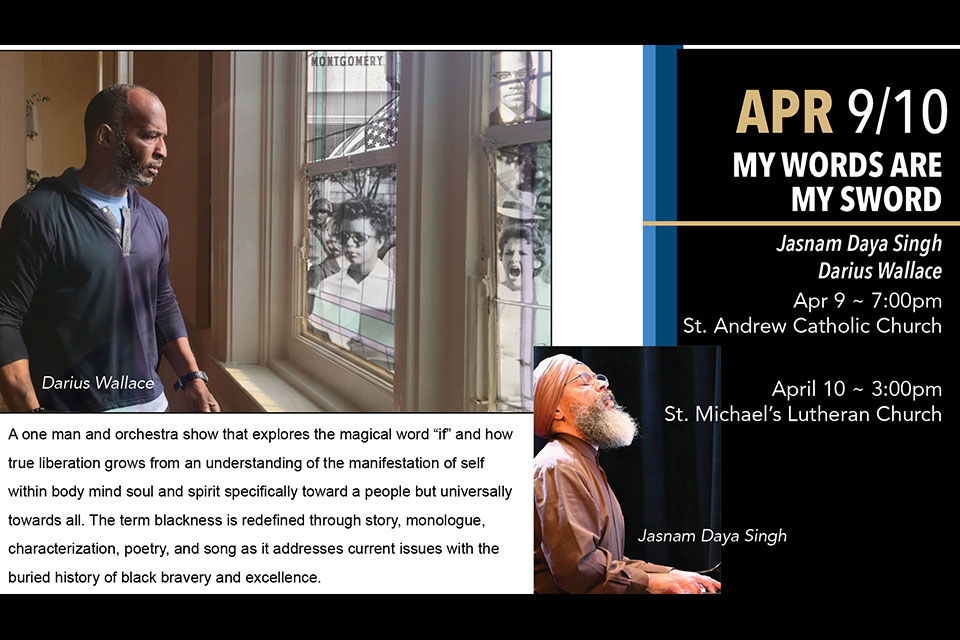 Portland Chamber Orchestra has rescheduled  the concert originally planned for Feb. 19 and 20 to April 9 and 10.  The event presents the powerful and timely collaborative work, My Words Are My Sword, featuring Grammy-nominated concert/jazz pianist and composer Jasnam Daya Singh, and nationally recognized actor Darius Wallace.

In partnership with The Portland Chamber Orchestra, the Oregon Commission on Black Affairs (OCBA) is facilitating the purchase of My Words Are My Sword tickets for Black Oregonians: https://tinyurl.com/OCBAtickets. Tickets to the performance are on sale now.

Donations can be made to sponsor tickets for Black community members to attend the performance: https://apps.oregon.gov/ECommerce/EPS/oac/program?key=2.

Phil Darius Wallace is a native of Flint, Michigan where he was introduced to the world of performing. He studied theater at Interlochen Arts Academy, one of the most prestigious boarding fine arts high schools in the country. Upon graduating, he went on to study performing arts at SUNY Purchase in New York.

Professional experience includes Michigan Shakespeare Festival, Flint Youth Theater, Attic Theater and Hattiloo Theater. He is currently a company member of Playhouse on the Square, Voices of the South, and a foundation member of The Tennessee Shakespeare Company.  His film and TV credits include Nothing but The Truth, Brian Banks, The World We Make, Killer Instinct, No Vacancy, Tyler Perry’s Sista’s, ABC’s Nashville, NBC’s Bluff City Law, and The Hallmark Channel’s Wedding at Grace Land.  He also developed and directed 100 Lives.

Born Weber Ribeiro Drummond in Rio de Janeiro, Brazil on Feb.17, 1962. It wasn’t until the mid-90’s that Weber adopted the stage name Weber Iago as a homage to the Roma People, also known as Gypsies. Since taking Amrit (initiation in the Sikh Religion) in 2013, Iago has adopted the name Jasnam Daya Singh.

Jasnam has spent all his musical life researching different types of sounds, ultimately dedicating most of his endeavors to uniting elements of classical, jazz and Brazilian music.

In Brazil, Jasnam spent years developing his craft as a concert pianist as well as a composer, writing mostly piano and chamber music works.

In the early 80’s he began developing a strong interest in jazz which prompted his move to Los Angeles in 1987.

Once in the U.S. Jasnam began work with notable musicians such as Moacir Santos, one of Brazil’s greatest composers and arrangers.

Since 1991 Jasnam has made appearances at the Monterey Jazz Festival, among those are the one in 2005 with the Carla Bley Big Band, which featured Carla, herself, Steve Swallow and Billy Drummond and 2010 as part of the Hristov Vitchev Quartet. Hristo is a great guitarist and composer.

At the end of 2005 Daya Singh was commissioned by the Carmel Bach Festival to write a composition uniting different musical genres such as Classical and Jazz. The result, Jazz Concertino for Piano and String Orchestra was premiered in 2006 in Monterey, California. The Portland Chamber Orchestra performed this concerto in February 2017 at Lewis & Clark College with Jasnam at the piano.