Film Review: The Harder They Fall 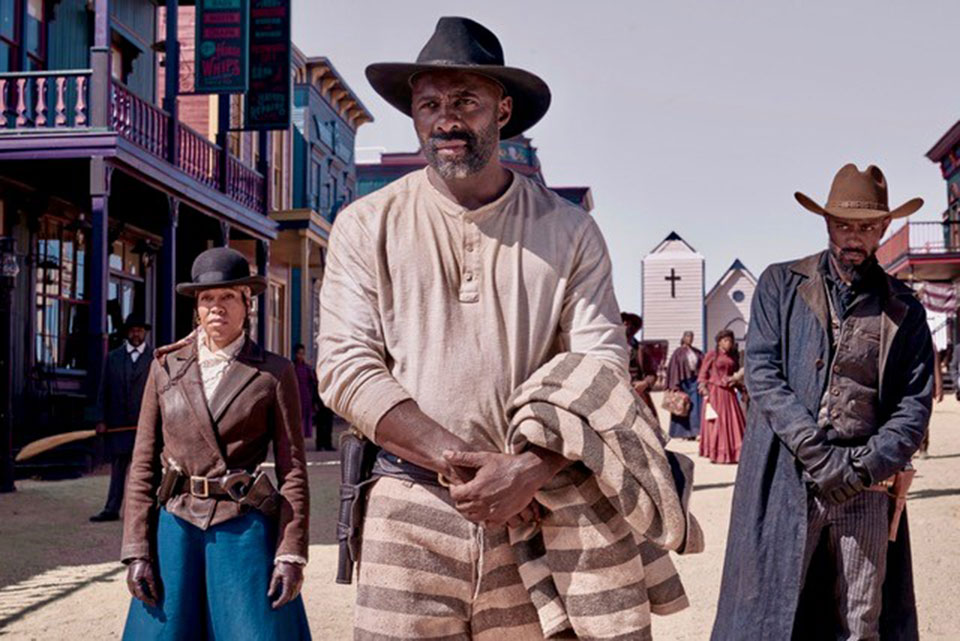 The setup for this shoot ’em up started with the 2013 short film They Die by Dawn, the brainchild of Jeymes Samuel, aka “The Bullitts.” He’s a British singer-songwriter, producer and writer/director who is also the brother of the Grammy Award-winning musician Seal. In the past, Samuel would make films to accompany his album releases. They Die… fits that pattern and featured Western characters based on real people: Nat Love, played by Michael K. Williams and Stagecoach Mary portrayed by Erykah Badu. Eight years later, after a perfect gestation period, The Harder They Fall comes to theaters and Netflix and its genius is no fluke. It’s been nurtured by Samuel and co-writer Boaz Yakin (Remember the Titans) who’ve thoughtfully created a wild West tale of biblical proportions with a new cast and additional characters. 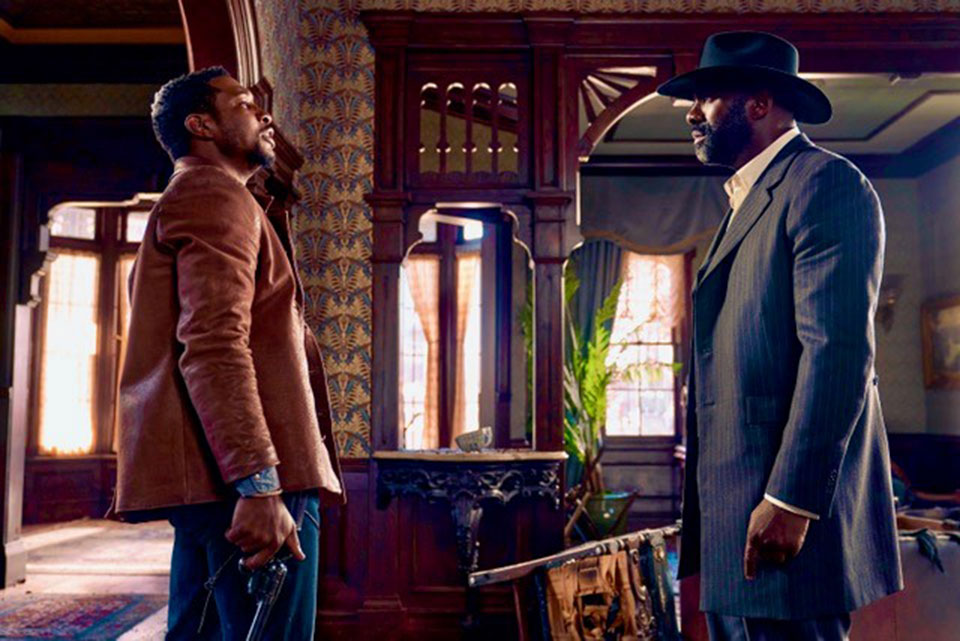 Jonathan Majors and Idris Elba in The Harder They Fall.

Nat Love (Jonathan Majors, The Last Black Man in San Francisco) has been trailing and killing bad men who messed with him and his family decades ago. The barrel of his gun has meted out the ultimate punishment again and again. The last one standing is the killer whom he despises most, the cunning and elusive Rufus Buck (Idris Elba). The men’s mutual hatred runs as deep as Cain and Abel’s. 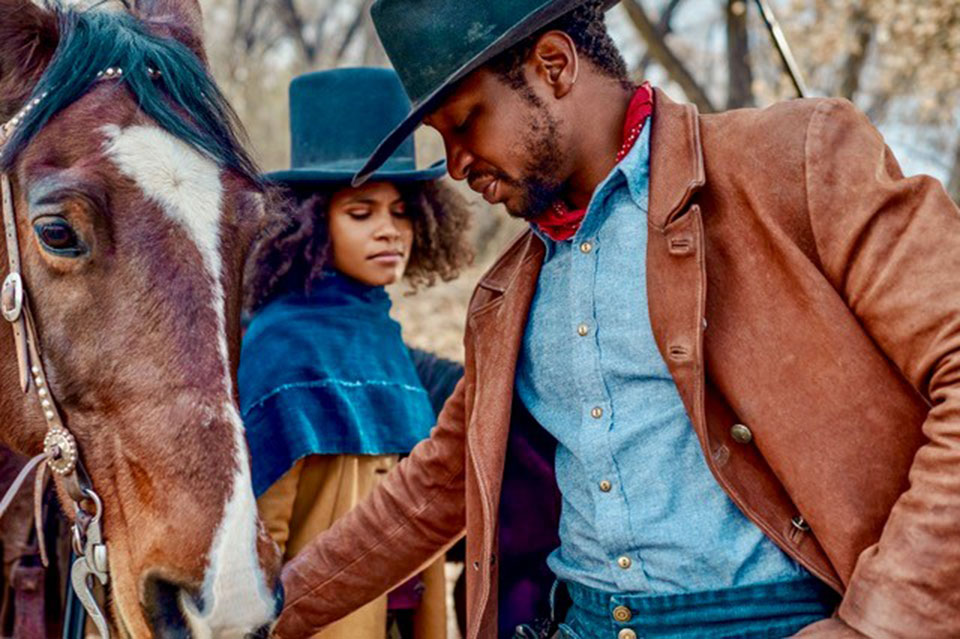 Zazie Beetz and Jonathan Majors in The Harder They Fall

A graphic murder starts the footage. It’s set in a small house with furniture, fixtures and props that look like they were stolen off the set of “Gunsmoke” (production designer Martin Whist; set decorators Jay Hart, Cynthia La Jeunesse and Anthony Whitman). Clearly, a young Nat has been wronged and emotionally scarred by a demonic act. No need to guess why adult Nat’s revenge is so hellbent. It’s payback—a driving force that propels the film until the last bullet is shot. The court of characters surrounding Nat and Rufus are as colorful, deadly and memorable as any gunslingers ever assembled for a wes/dra/act/thr. And, somehow, intuitively, Samuel and Yakin have figured out a way for the outlaws to talk in an 1800s country/Western drawl with the ferocity of enraged gangbangers from modern times. Specifically, Majors speech pattern, inflection, phrasing and dialogue will leave audiences astounded by his character’s 19th century, post-Civil War authenticity and contemporary swagger.

As a director, Samuel keeps the action coming and coming. Tense verbal confrontations, robberies, gunfights, fisticuffs and riding the range over arid land test the mettle of the cast, stunt doubles and cinematographer (Mihai Malaimare Jr., Jojo Rabbit). A steady, pulsating rhythm beats faster and faster as it edges towards the film’s 2hr 10min length (editor Tom Eagles, Jojo Rabbit). Everything is big. Loud. Exaggerated. Especially the thunderous horse hoofs as they pound the earth like explosives. And the soundtrack vibrates with bold music that enhances the film’s bravura spirt, though it doesn’t necessarily reflect the times. Jamaican reggae singer Koffee sings the title track, reggae/dancehall legend Barrington Levy, Jay-Z, Lauryn Hill and Jadakiss bring down the house too.  Only a few scenes flounder or are too far-fetched: a long-winded marriage proposal and an improbable ruse to buy a saloon. 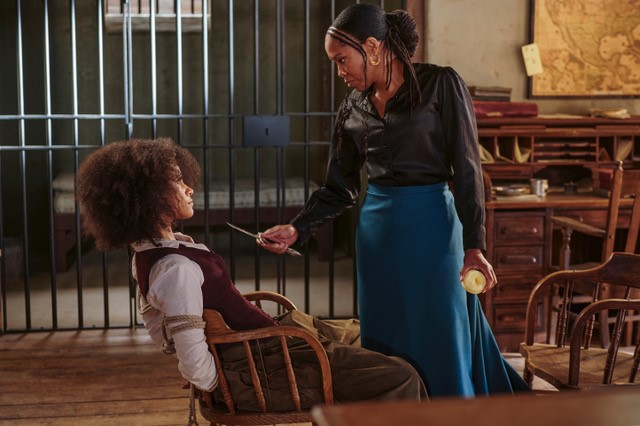 Zazie Beetz and Regina King in The Harder They Fall.

Gunfights are brutal and choreographed with both a grace and ruggedness. The universally convincing performances are a testament to an astute director who knows how to pull what he needs from a very professional cast. Some may want to compare Samuel’s visions to Sergio Leone’s stylish spaghetti Westerns. Others will bring up Tarantino’s name. Samuel’s ability to mix old, new and black culture differentiates him from those two, and black Westerns (e.g., Mario Van Peeble’s Posse) are a genre all their own. Also of note, these curse-spewing Black folks rarely if ever utter the “N” word.

The sterling cast’s vibrant ensemble acting blends perfectly and they are dressed for battle (costume designer Antoinette Messam). Danielle Deadwyler’s portrayal of Mary’s androgynous security guard is one for the LGBTQ ages. Delroy Lindo as Sheriff Bass Reeves, who plays both sides of the fence, can blow everyone in his path away. Stanfield’s Cherokee is just sardonically and laconic enough: “Being scared will only give you bad karma in the afterlife.” King is as lethal as a Colt 45 with a slug in its chamber. Beetz straddles the femininity and aggressive qualities of her character well, while Elba parades around like an African king, as he should. If there is one actor that shines a bit brighter it’s Majors, who finds all the right nuances in a boy done wrong settling grievances as a man. 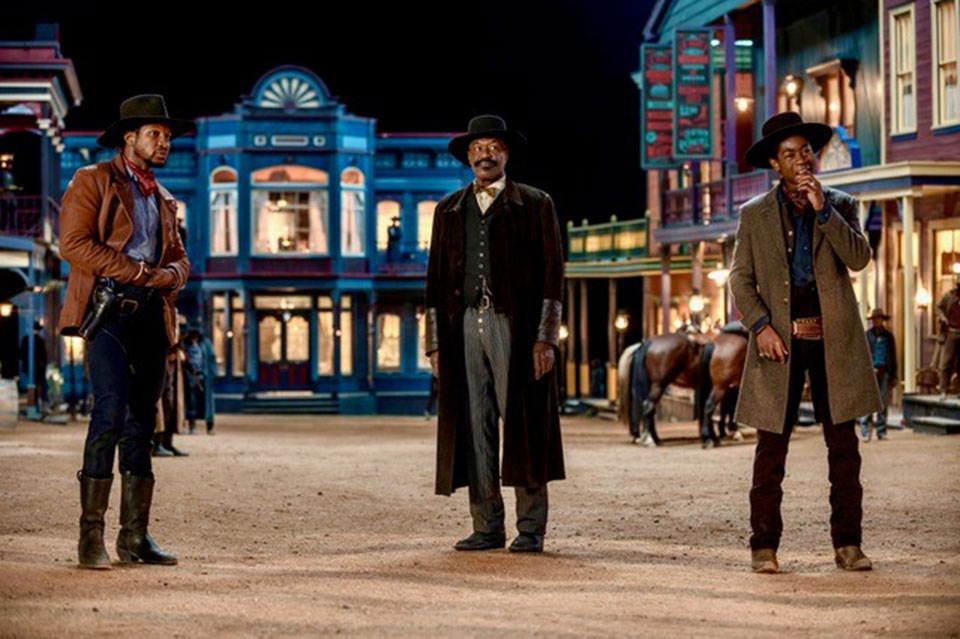 Jonathan Majors, Delroy Lindo and R.J. Cyler in The Harder They Fall

This cowboy tale is unapologetically strong and Afrocentric, a la Black Panther. It’s as cutting edge as it is retro. Expect action-loving Netflix watchers to gather around TVs like curious townsfolk eyeballing the gunfight at the O.K. Corral. If you like Westerns as much as you like black swagger—this one is calling your name.