'The Crown,' 'Mandalorian' Top Emmy Nominations With 24 Each 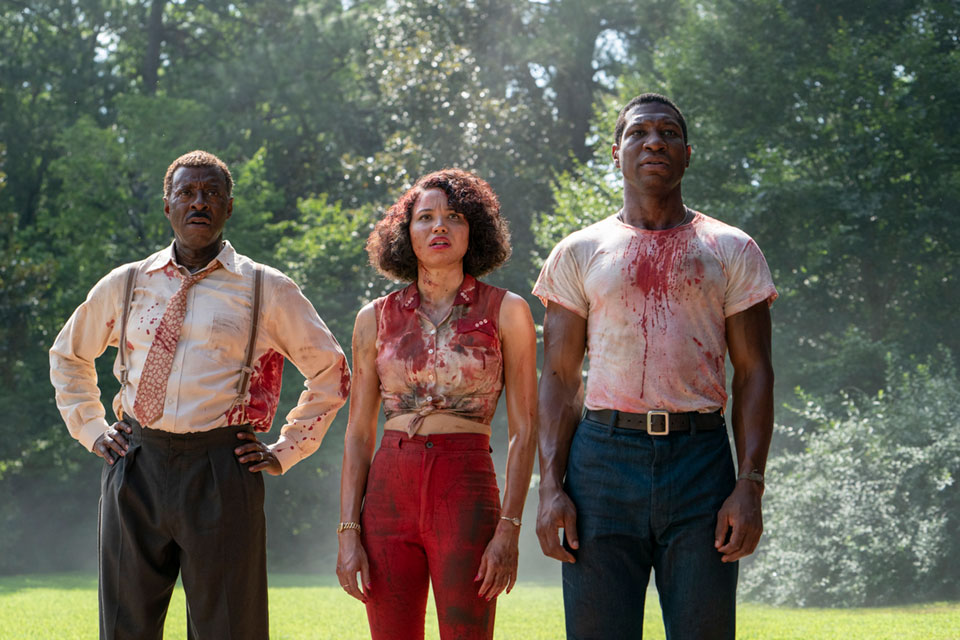 LOS ANGELES (AP) — "The Crown” tied with “The Mandalorian” for the most Emmy nominations Tuesday with 24 apiece, but the Marvel universe also got bragging rights with runner-up “WandaVision.”

The nominations reinforced the rapid rise of streaming, with the top-nominated scripted shows on services that largely emerged in the past two years. In the top three categories — drama, comedy and limited series — only the NBC show “This Is Us” and ABC's “black-ish” snagged nominations.

In a pandemic year in which housebound Americans relied more than ever on television for distraction, TV academy voters recognized a varied mix of storytelling and a diverse group of actors and creators.

One example: Mj Rodriguez of “Pose” is the first trans woman to be nominated in a lead acting category. The show also earned a best drama series nod. 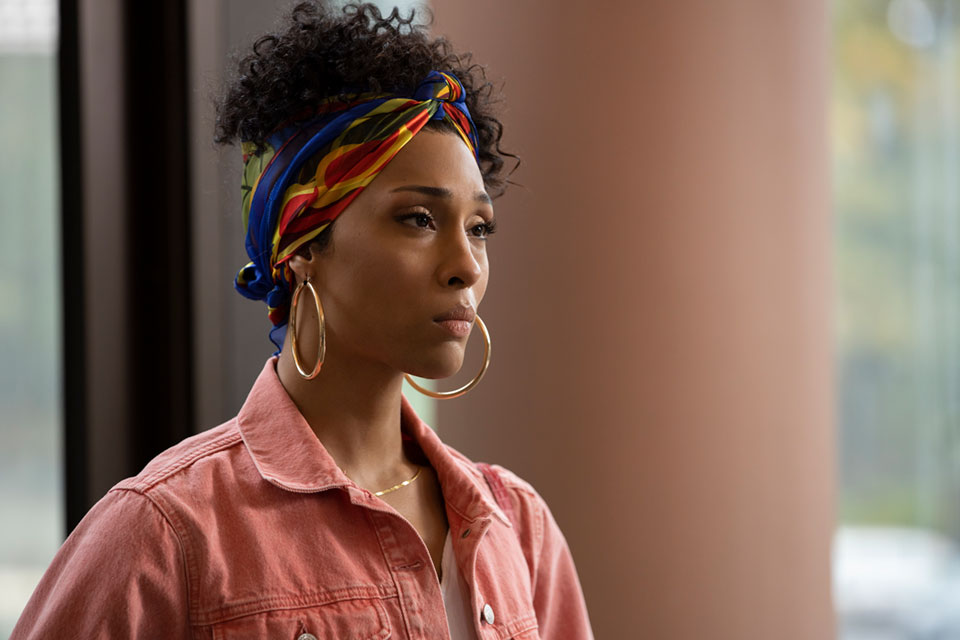 This image released by FX shows Mj Rodriguez as Blanca in a scene from "Pose." Rodriguez was nominated for an Emmy Award for outstanding leading actress in a drama series. (Eric Liebowitz/FX via AP)

Netflix’s “The Crown” received its fourth nomination for best series, and is likely the streaming service’s best chance to win its first-ever top series trophy. The British royal drama moved closer to contemporary events with its version of the courtship and rocky marriage of Prince Charles and Diana Spencer, played by Josh O’Connor and Emma Corrin. 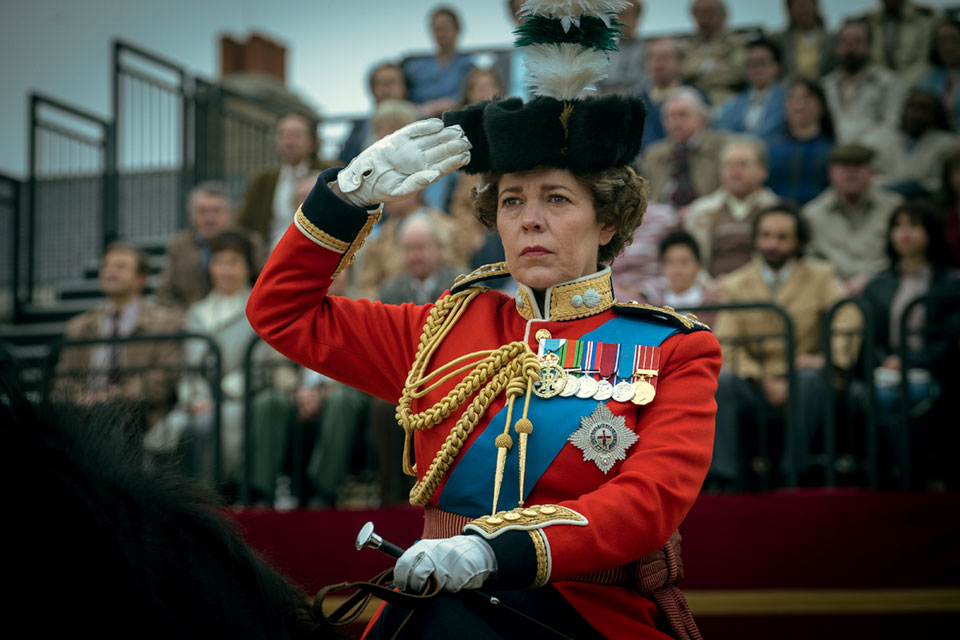 This image released by Netflix shows Olivia Colman as Queen Elizabeth II in a scene from "The Crown." Colman was nominated for an Emmy Award for outstanding leading actress in a drama series. (Liam Daniel/Netflix via AP)

O’Connor and Corrin received lead drama acting nods, as did the series’ Olivia Colman for her portrayal of Queen Elizabeth II, with a supporting bid to Gillian Anderson for her performance as Prime Minister Margaret Thatcher. 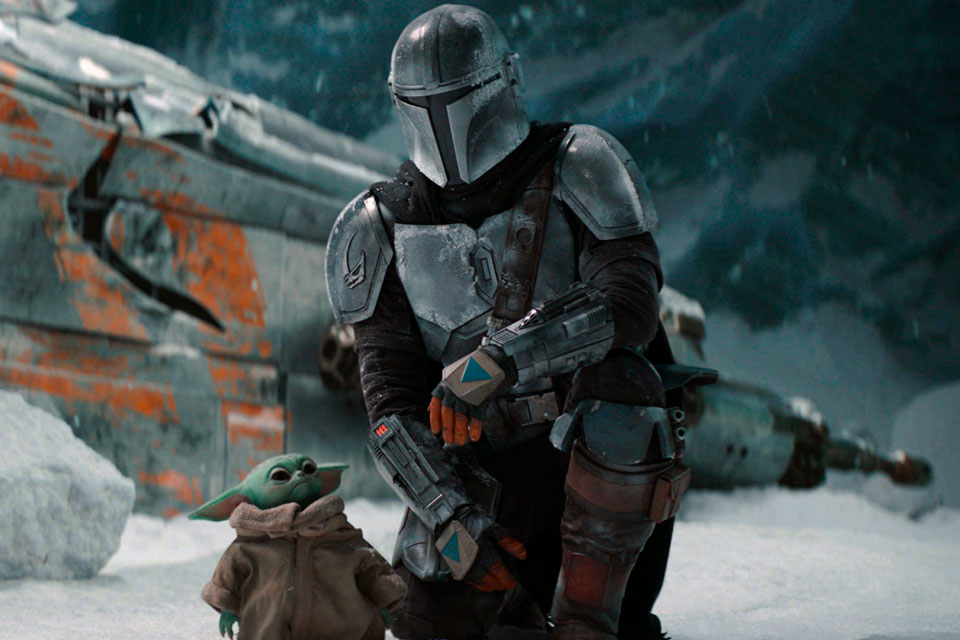 This image released by Disney+ shows Pedro Pascal in a scene from "The Mandalorian." (Disney+ via AP)

The showings by “The Mandalorian,” an extension of the “Star Wars” franchise, and the inventive “WandaVison” featuring the Marvel characters Wanda and Vision, put the series in the ranks of past sci-fi and fantasy Emmy favorites “Game of Thrones” and “Lost.”

The frontrunner on the comedy side is the good-hearted “Ted Lasso,” about a middling American football coach imported to England to handle a soccer team. The Apple TV+ series received 20 nominations, including for top comedy, star Jason Sudeikis and six cast members.

“Hacks,” starring Jean Smart as a stand-up comedian who resists getting aged out of Las Vegas and life, was next with 15 nods, including a lead actor award for Smart and a supporting bid for Hannah Einbinder.

Smart, who some have said is enjoying a career “Jeannaisance,” earned a second nomination for her supporting role in the limited series “Mare of Easttown.” 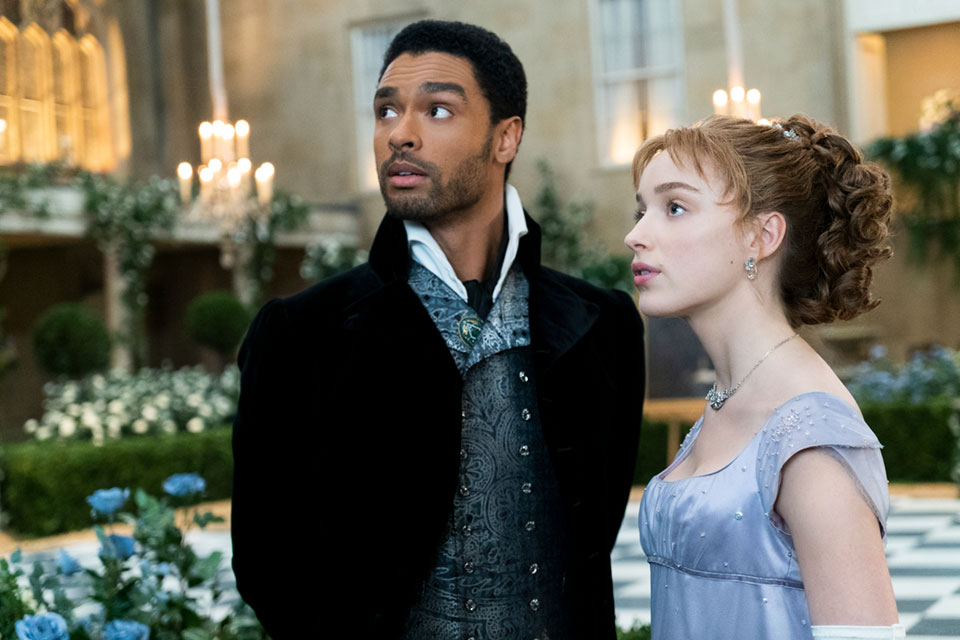 This image released by Netflix shows Phoebe Dynevor, right, and Rege-Jean Page in a scene from "Bridgerton." The program was nominated for an Emmy Award for outstanding drama series. (Liam Daniel/Netflix via AP)

The other nominees for best drama series are: “The Boys”; “Bridgerton”; “The Handmaid’s Tale” and “Lovecraft Country.”

The other nominees for best comedy series are: “Cobra Kai”; “Emily in Paris”; “The Flight Attendant”; “The Kominsky Method” and “PEN15.” 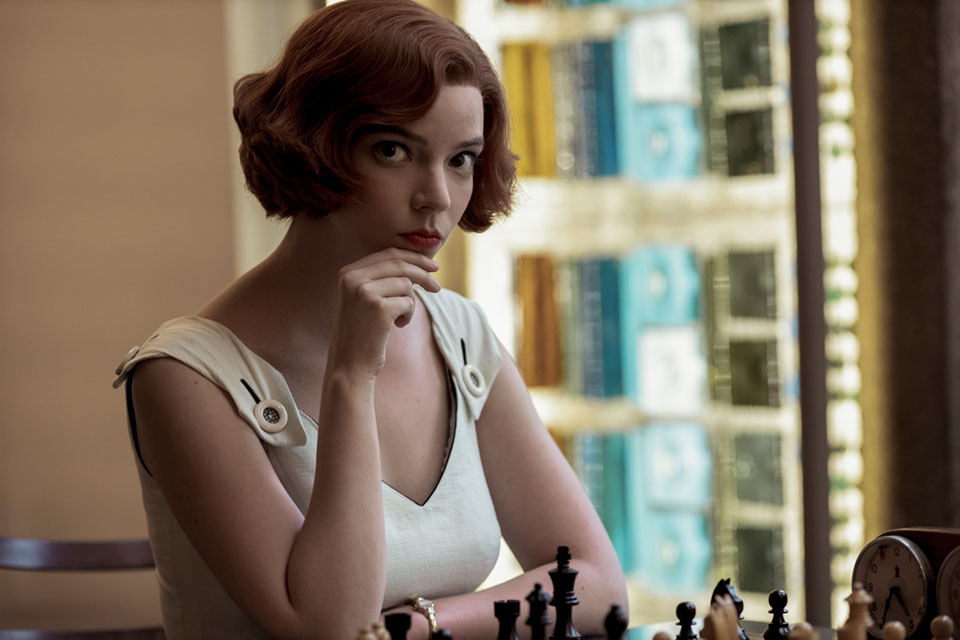 This image released by Netflix shows Anya Taylor-Joy in a scene from "The Queen's Gambit." Taylor-Joy was nominated for an Emmy Award for outstanding leading actress in a limited series or movie. (Phil Bray/Netflix via AP)

The nominees for best miniseries are: “The Queen’s Gambit”; “I May Destroy You”; “Mare of Easttown”; “The Underground Railroad"; “WandaVision.” 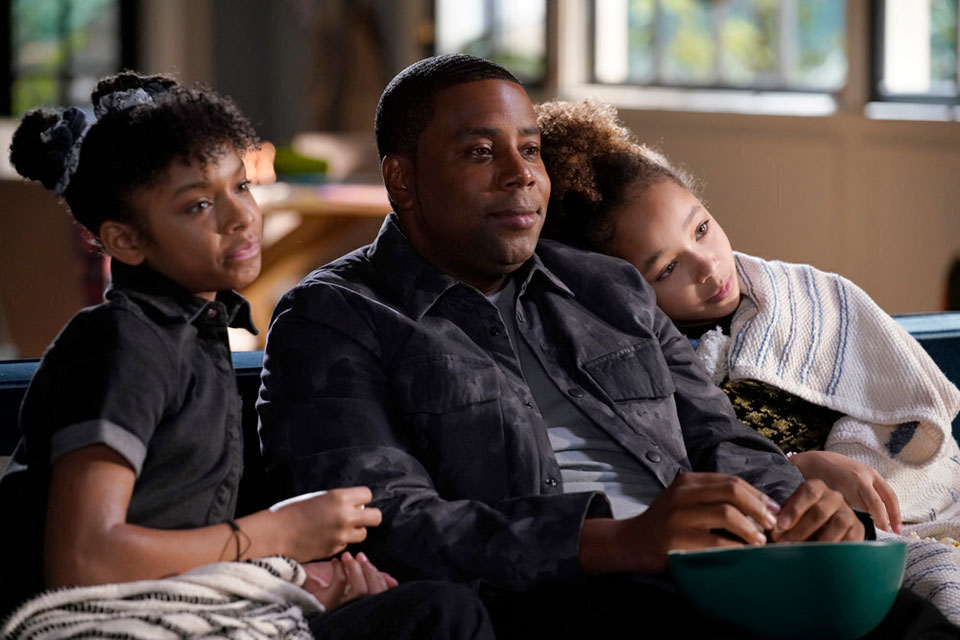 This image released by NBC shows, from left, Dani Lane as Aubrey, Kenan Thompson as Kenan, and Dannah Lane as Birdie in a scene from the comedy series, "Kenan." Thompson was nominated for an Emmy Award for outstanding leading actor in a comedy series. (Casey Durkin/NBC via AP)

The nominees for best actress in a limited series or TV movie are: Michaela Coel, “I May Destroy You”; Cynthia Erivo, “Genius: Aretha”; Elizabeth Olsen, “WandaVision”; Anya Taylor-Joy, “The Queen’s Gambit”; Kate Winslet, “Mare of Easttown.” 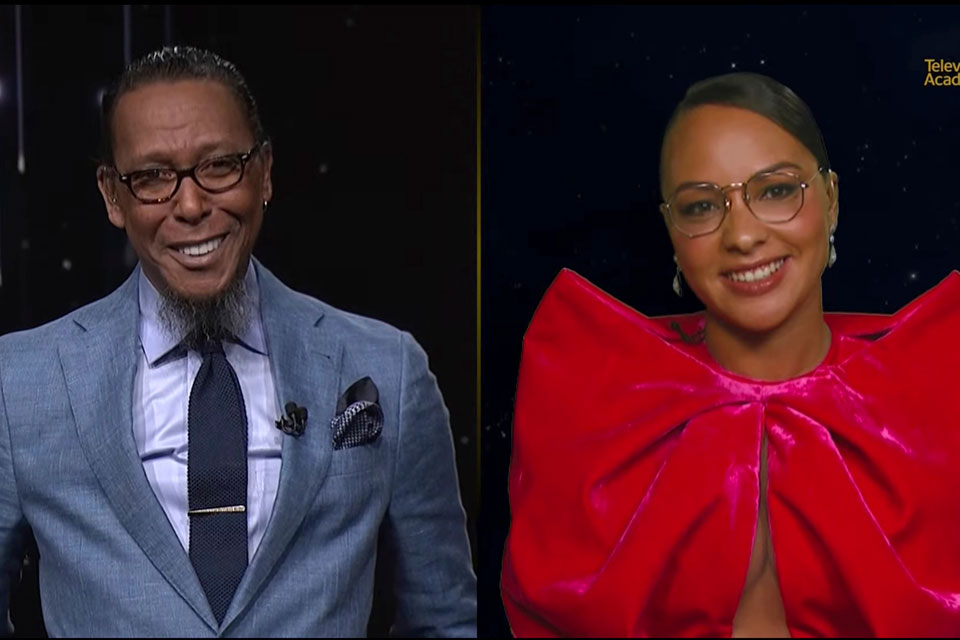 This video grab provided by the Academy of Television Arts & Sciences shows Ron Cephas Jones, left, and his daughter Jasmine Cephas Jones as they speak during the 73rd Emmy Awards Nominations Announcement on Tuesday, July 13, 2021. (Television Academy via AP)

Father-and-daughter actors Ron Cephas Jones (“This Is Us”) and Jasmine Cephas Jones (“Blindspotting”) and TV Academy head Frank Scherma announced the nominees. There were awkward moments when the pair mispronounced some nominees' names, including referring to Taylor-Joy as “Anna.”

The Sept. 19 ceremony, which last year was held virtually because of the COVID-19 pandemic, will air live on CBS from a theater and include a limited in-person audience of nominees and guests. Cedric the Entertainer is the host.