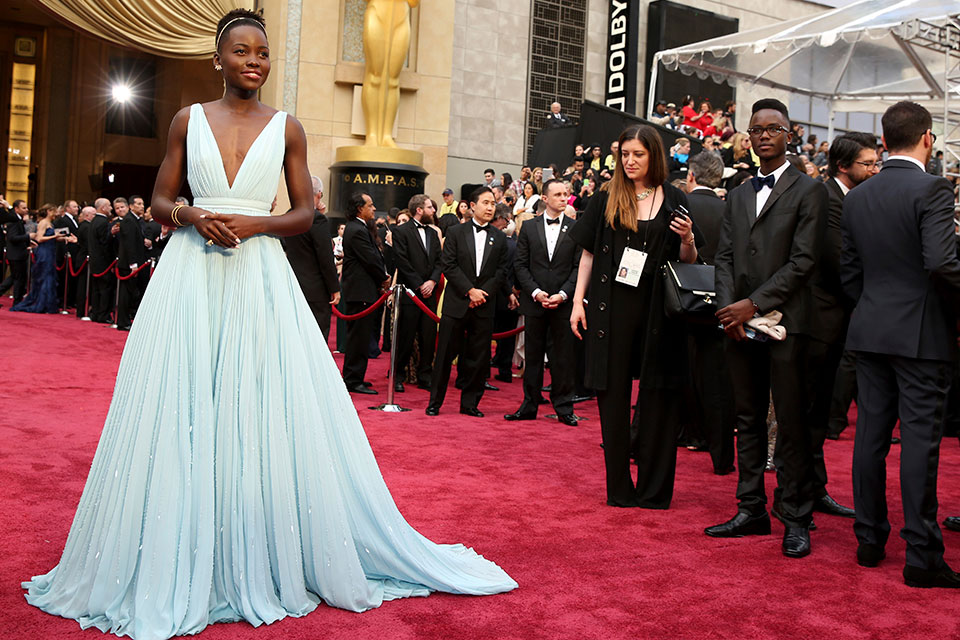 NEW YORK (AP) — Remember the ethereal pale blue Prada dress Lupita Nyong'o wore the night she won an Oscar in 2014? How about Glenn Close's moment in gold at last year's Oscars in shimmering Carolina Herrera with the long, liquid cape?

In a sea of red carpets, both are among top talent who got to keep their fancy duds. 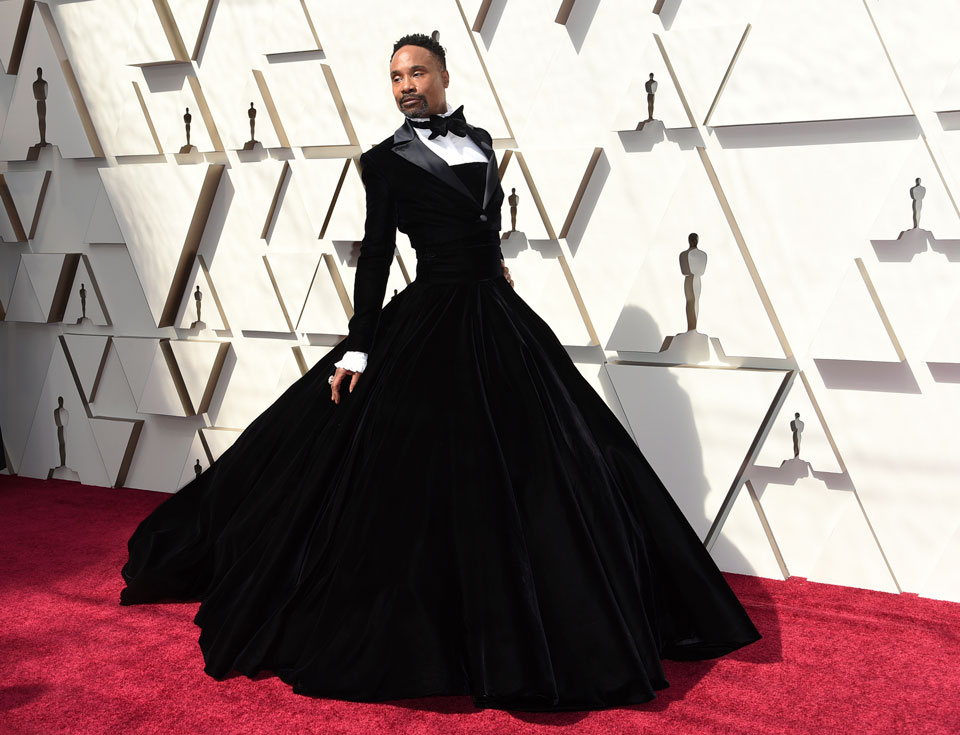 This Feb. 24, 2019 file photo shows Billy Porter wears a black velvet tuxedo gown by Christian Siriano at the Oscars in Los Angeles. Porter recently put it on again for "Sesame Street." (Photo by Richard Shotwell/Invision/AP, File)How a red carpet moment comes together, and what happens to the clothes after, can be a peculiar affair that heavily depends on who you are and what your relationship happens to be with the designer in question. A designer's decision to gift or not to gift often comes after the big night is over and it's time for stylists to pack 'em up and ship 'em back.

"They're delighted if the designer says, 'Oh, please keep it. I made that just for her. She should have it,'" said stylist Emily Sanchez, who has dressed Laura Linney and Sutton Foster, among others. "If a designer feels they're going to want something back immediately, they're pretty transparent about it."

Many gowns live out their days in a designer's archives, to be lent out to museums or for other special events, such as the Christian Siriano tuxedo gown Billy Porter wore at last year's Oscars and recently put on again for "Sesame Street." Far rarer is a celebrity buying them instead. 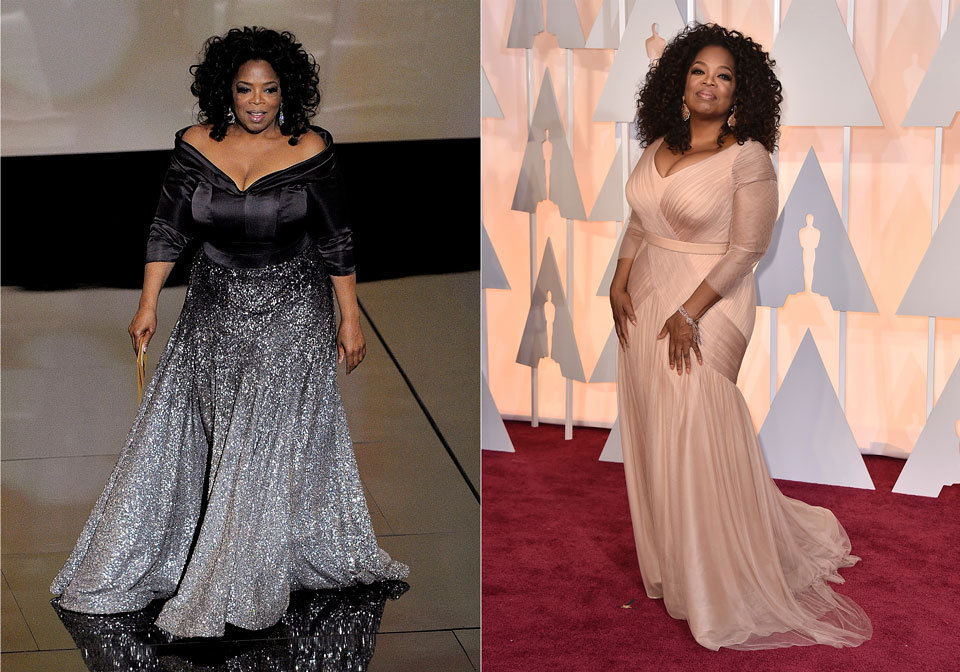 This combination photo shows Oprah Winfrey walking on stage to present the award for best documentary feature during the 83rd Academy Awards in Los Angeles on Feb. 27, 2011, left, and Winfrey arriving at the Oscars in Los Angeles on Feb. 22, 2015. Oprah has dresses custom made and pays for them, so she keeps her gowns. (Photo by Jordan Strauss/Invision/AP, File)"For Oprah, we have dresses custom made and pay for them, so she keeps hers," said Adam Glassman, creative director of O, The Oprah magazine.

These days, Sanchez said, most nominees are offered bespoke.

"That's sort of like the big honor. Typically you get to work with the designer directly. It's such a huge press opportunity so designers are pretty excited to do that," she said. "If you won, you probably want the dress, but I think everyone who goes to one of these events is fully prepared to give the dress back at the end of the day."

Coming at the end of the awards season, the Oscars are a mad scramble for fresh looks after an exhausting cycle of red carpets, parties and other appearances. There are fewer nominees to dress, along with presenters.

Stylist Micaela Erlanger, who has worked with Nyong'o, Meryl Streep and others, said the Oscars are a mix of custom, couture or never-worn runway looks, the latter sometimes with modifications to the silhouette or color. Generally, Erlanger strives for custom.

"It's the end of the season so you kind of have to resort to custom. So much has already been through the circuit. By the Oscars, I've probably seen every dress out there," she said.

When it comes to gifting, every brand is different, Erlanger said.

"Some brands want to keep them for their own archives. The brand decides that and the client is happy either way," she said.

"I'd say it's 50-50. If someone wins in a dress, generally speaking the brands are more inclined to give that as a gift because it's very sentimental."

For the Oscars this year, she's dressing Sigourney Weaver for the show and Diane Kruger for the Vanity Fair after-party.

Stylist Chloe Hartstein will be dressing presenter Chris Rock for the Oscars. She worked with two nominees, Close and Melissa McCarthy, last year.

Keeping the clothes isn't automatic for nominees, including those who win, Hartstein said.

"It's a Cinderella moment where you wear it and then the next morning I'm there bright and early to grab it and pack it up and send it to Paris or wherever it needs to be. But there are moments where you're lucky enough to keep them," she said.

With many thousands of dollars of work and materials at stake, along with long hours of labor, some designers are more generous than others. 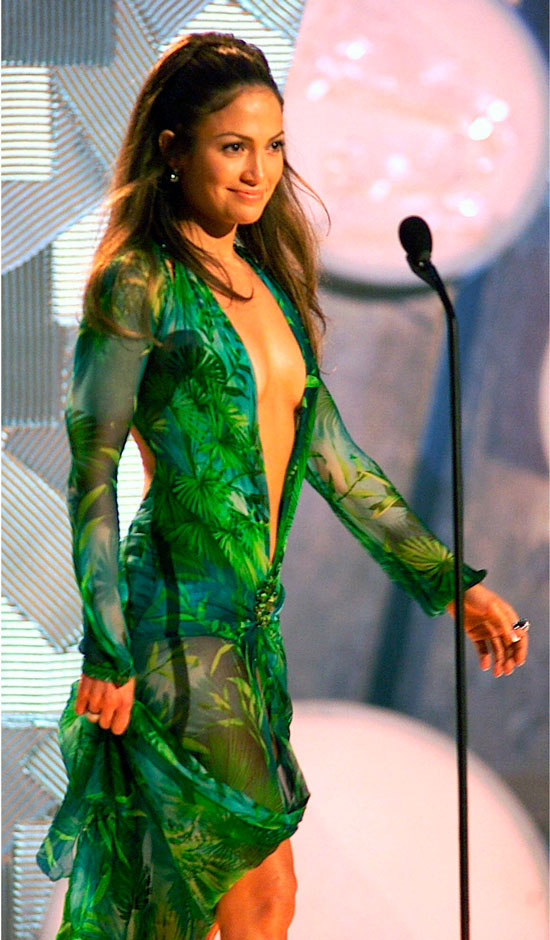 Versace made duplicates for museum display, including the Grammy Museum, and  Lopez wore a reimagined version for the Versace show at last September's Milan Fashion Week.

Close enjoyed a slew of custom pieces last year with her nominations for "The Wife." She was gifted a black velvet cape look by Armani Prive from the Golden Globes after she won for best actress in a drama. She was also gifted the white crystal Ralph Lauren suit she wore when she won a Screen Actors Guild award for the same film.

This year at the Golden Globes, Close was a presenter and wore a royal blue custom gown by Armani Prive. It, too, was gifted. The Oscar de la Renta caftan she wore to the Screen Actors Guild awards wasn't custom and went back after she presented there.

"She has a beautiful relationship with Mr. Armani. She's been wearing the brand forever," Hartstein said. "With Glenn last season, it's a discussion we had throughout the process."

Close has a keen interest in fashion, amassing personal looks but also costumes from her films and other projects throughout her nearly 40-year career. She donated her costume collection to Indiana University in 2017.

"I borrow them," Dever said on Sunday's BAFTA red carpet. "I'm trying to be more green in every aspect of my life. ... I'm really trying in all areas. I think if you just try a little bit at least, that does something."

Saoirse Ronan, who's nominated for best actress at the upcoming Oscars, said her black Gucci gown at the BAFTAs included repurposed fabric. Does she get to keep it?

"No, they usually go back," said Ronan and several others at the British awards show.

Jaclyn Alexandra Cohen, the fashion and accessories editor for Harper's Bazaar, said designers more often than not hold on to gowns.

"Whether they're pulled from the runway or created custom for a celebrity, most gowns we see at award shows are returned to the house and kept in the designer's archive," she said. "Many of these one-of-a-kind dresses will go down in fashion history as iconic looks."