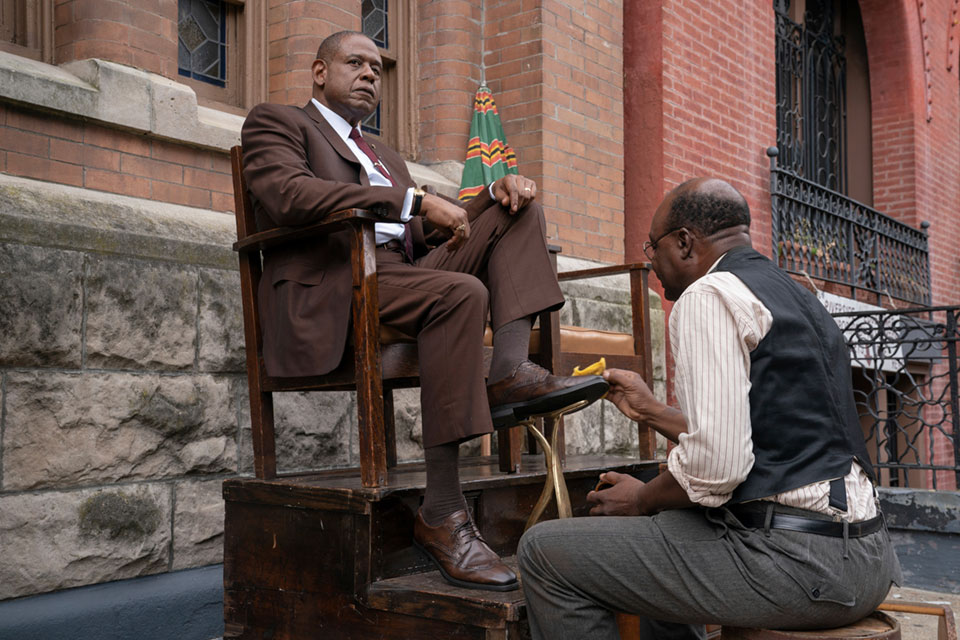 LOS ANGELES — Forest Whitaker plays a real-life crime boss in Epix's new drama series "Godfather of Harlem" with the commanding intensity expected from him. What's less expected is the movie musical he filmed in London this summer, a U-turn for the actor who started out a singer.

"Jingle Jangle," a Netflix movie set for a holiday 2020 release, and "Godfather of Harlem" highlight Whitaker's range and why he switched to acting — this despite the vocal talent that earned him a scholarship to the University of Southern California's music school and attracted his first agent.

Whitaker Aspires to Affect his Own Communities

"I didn't think I would be able to affect the people from my own communities. I didn't think they would even watch" the likes of light opera, he said. "So I made the decision that acting would be the way, and I walked away from music."

After earning a degree from USC's drama school, Whitaker gained notice for early films including "Platoon" and "Good Morning, Vietnam" and was honored at the Cannes Film Festival for his portrayal of jazz great Charlie Parker in 1988's "Bird." His searing performance as Ugandan dictator Idi Amin in 2006's "The Last King of Scotland" put him in the company of the handful of African Americans to receive the best actor Oscar.

It was youthful idealism that helped him reject work that didn't match his aspirations. For Whitaker, acting didn't equal stardom or a steady gig; it was a quest, as he put it, to find "the pilot light of each person" and understand human connections.

"I was offered a soap opera, I said, nah. That has nothing to do with what I'm trying to do. And it ultimately worked, where I ended up getting to play some very unique characters throughout this 30-something years," Whitaker, 58, told The Associated Press. "And I'm still getting the opportunity. This character of Bumpy Johnson is a unique and iconic figure to get to play."

The 10-episode "Godfather of Harlem," debuted 10 p.m. EDT last Sunday, is part of a string of TV movie and series projects he's done over the years, including a guest turn in Fox's hip-hop drama "Empire" that let Whitaker briefly put his vocal skills on display (as he did in the 2013 film "Black Nativity").

Whitaker plays Johnson in the early 1960s, returning home from prison to find Italian American gangsters muscling in on his New York City turf and young activist Malcolm X on the rise. Whitaker, also an executive producer for the series, said he'd had only a glancing knowledge of Johnson from films including 1997's "Hoodlum," which starred Laurence Fishburne.

"I didn't realize or understand the relationship between him and Malcolm X.

"I didn't know about his family life," Johnson's links to the civil rights movement or what drove him, Whitaker said in a panel discussion. "That was interesting to me as something to develop and something to be able to be a part of as an actor. It was amazing."

Whitaker's on-set demeanor was critical to the production, according to executive producer Chris Brancato. "Everyone captures his energy, which is so sweet and gentle," he said at a recent Epix red-carpet event in New York.

Vincent D'Onofrio plays Johnson's chief rival in crime, with Ilfenesh Hadera as Johnson's wife; Nigel Thatch as Malcolm X, and Giancarlo Esposito as Adam Clayton Powell Jr. Paul Sorvino and Chazz Palminteri also are in the cast. The score is composed by by Mark Isham, with tunes from the '60s or earlier are featured, along with contemporary songs produced by Swizz Beatz with artists including John Legend and DMX.

The story and its people were carefully researched through books and interviews with those who lived in Harlem during Johnson's time, Brancato said. Ellsworth Raymond Johnson, nicknamed Bumpy as a child, was born in 1905 in South Carolina and died of heart failure in 1968.

"Wherever we could we sought to put their actual attitudes and specific words in their mouths," Brancato said in the panel discussion. "Dramatic license was taken to create scenes, but the entire goal was to endeavor to keep the spirit of the times and of the characters as we saw them."

It's a big leap from a crime drama to the family friendly "Jingle Jangle," in which Whitaker plays an eccentric inventor and grandfather. It was also a rewarding one as he rediscovered his singing voice and something more: His character's journey and the upbeat attitude of director David E. Talbert showed inspiration can be found outside "the more down and sadder" places familiar to Whitaker.

Talbert is "so joyous about it. It's teaching me so much I need to know, and this character's teaching me something. I don't always live in that kind of joy," the actor told the AP.