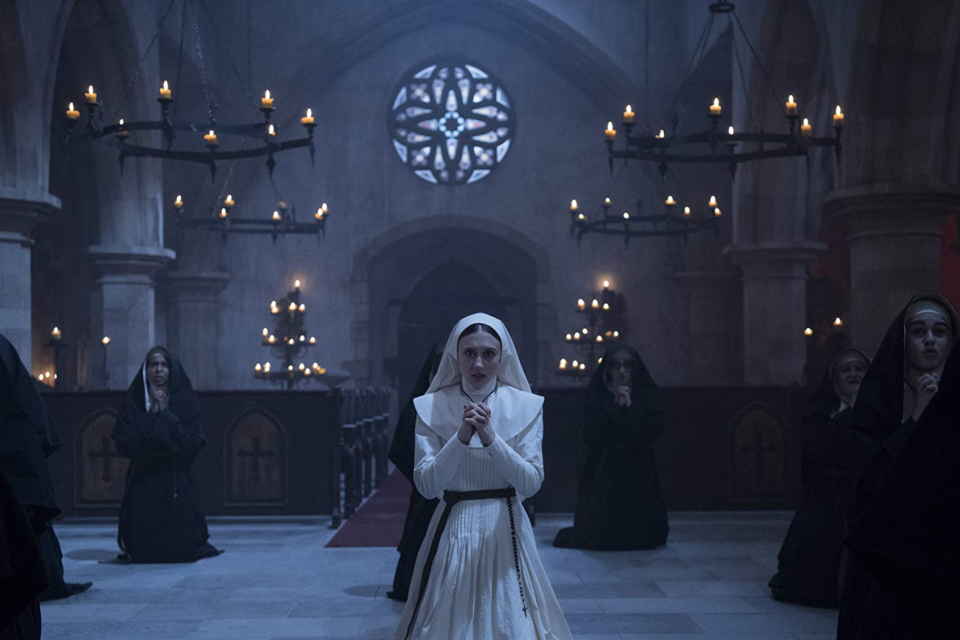 The Nun (R for terror, gore, violence and disturbing images) Bonnie Aarons plays the title character in this fifth installment of “The Conjuring” franchise, set in 1952, about a priest (Demian Bichir) and a novice (Taissa Farmiga) sent by the Vatican to Romania to investigate a malevolent force unleashed in an abbey. With Jonas Bloquet, Ingrid Bisu and Charlotte Hope.

Peppermint (R for graphic violence and pervasive profanity) Crime thriller revolving around a grieving widow and mom (Jennifer Garner) who goes vigilante to exact revenge on the murderers of her husband and daughter in a drive-by shooting. Cast includes Annie Ilonzeh, John Gallagher, Jr. and Method Man.

The Apparation (Unrated) Faith-based drama, set in France in the 1850s, relating a fictionalized account of the life of St. Bernadette of Lourdes (Gallatea Bellugi), a 14 year-old girl visited by the Virgin Mary over a dozen times. With Vincent Lindon, Elina Lowensohn and Bruno Georis. (In French, Italian and English with subtitles)

Bisbee '17 (Unrated) Justice-delayed documentary about an Arizona mining town's belatedly fessin' up about the dark day 100 years ago that it deported 1,200 Mexican immigrants back across the Rio Grande.

Hal (Unrated) Reverential retrospective chronicling the career of the legendary Hal Ashby, director of such Oscar-winning classics as “Harold and Maude,” “Being There” and “Shampoo.” Featuring commentary by Jane Fonda, Judd Apatow and Jeff Bridges.

I Am Not a Witch (Unrated) Zambian fable of demonic possession about an eight-year-old girl (Margaret Mulubwa) accused and convicted of practicing witchcraft. With Boyd Banda, Nancy Mulilo and Benfors 'Wee Do. (In English and Nyanja with subtitles)

Kusama - Infinity (Unrated) Warts and all biopic revisiting the rise and fall of avant-garde artist Yayoi Kusama, who skyrocketed to fame in the ‘60s before suffering a mental breakdown and spending the last 30 years institutionalized in her native Japan.

Winter Ridge (Unrated) Suspense thriller about a young detective (Matt Hookings) who joins the hunt for a serial killer after his wife (Olwen Catherine Kelly) is left comatose by a tragic car accident. With Alan Ford, Justin, McDonald and Hannah Waddingham.