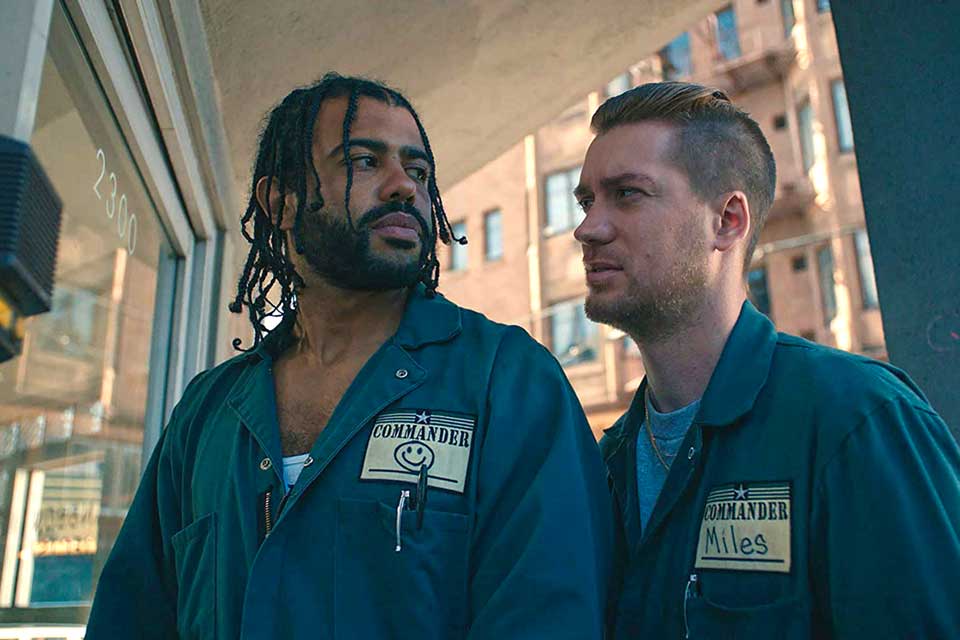 Collin (Daveed Diggs) and Miles (Rafael Casal), who are Black and White, respectively, have been best friends since they were kids. Now in their twenties, they both still live in the rough Oakland 'hood where they grew up, although they've been watching it gentrify in recent years. (Watch the trailer below)

The changing demographics have made it hard for the two to get along with their new yuppie neighbors. After all, Collin is a convicted felon on probation, while Miles has ghetto written all over him, from the grill in his mouth to the tattoos all over his body.

When Collin was paroled, Miles got him a dead-end job with the moving company where he works. So, by day, they get to share the cab of a truck.

After hours, immature Miles reluctantly goes home to his baby-mama (Jasmine Cephas Jones) and young son (Ziggy Baitinger), though he'd really rather roam the streets with his gun. By contrast, Collin has a strict curfew and needs to keep his nose clean, given that he's finishing up his sentence at a local halfway house.

The plot thickens one fateful evening as Collin sits in his car at a stoplight. He becomes the sole witness when a White police officer (Ethan Embry) shoots an unarmed Black man in the back.

Collin just drives away from the scene as ordered by the police, but the incident continues to haunt him for days. And when he tries to talk about it with Miles, racial tensions surprisingly surface which test their tight relationship.

Thus unfolds Blindspotting, an in your face buddy dramedy co-written by co-stars Daveed Diggs and Rafael Casal who reportedly worked on the timely script for over a decade. The movie marks the impressive directorial debut of Carlos Lopez Estrada, who is previously known for shooting music videos for bands like Reptar, Passion Pit and Goo Goo Dolls.

Blindspotting's searing exploration of hot-button issues as race, class and police brutality in such confrontational fashion makes for a thought-provoking experience guaranteed to affect you long after leaving the theater.