Film Review: It's Geriatric Legends vs. Youngbloods in ‘Uncle Drew’ 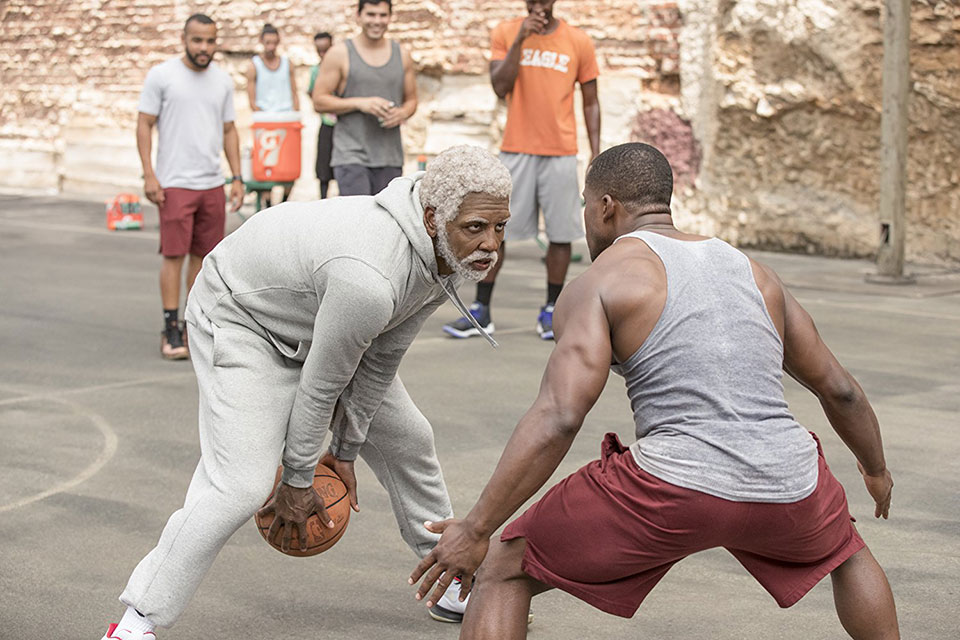 Rucker Park is home to a popular basketball tournament staged since 1950 on an outdoor court located at 155th Street in Harlem. Many promising prospects have honed their skills on the world famous proving ground en route to enviable NBA careers: Kevin Durant, Wilt Chamberlain, Karrem Abdul Jabbar, "Dr. J" (Julius Erving) and Earl "The Pearl" Monroe, to name a few.

Sadly, some Rucker standouts seemingly bound for glory have failed to even make it to the pro ranks, including such self-destructive streetball legends as Pee Wee Kirkland and Earl "The Goat" Manigault. Upon retiring, Jabbar referred to The Goat (aka Greatest of All Time) as the best player he'd ever competed against.

Uncle Drew is a hilarious hoops flick which pays tribute to Rucker Park as well as to the acrobatic athletes who have mesmerized generations of adoring fans attending the annual summer classic. Directed by Charles Stone III (Drumline), the picture stars the Boston Celtics' Kyrie Irving as the title character, but don't expect to be able to recognize him under all the gobs of plastic makeup turning him into a senior citizen.

Just past the point of departure, we find Dax (Howery) fielding a team to enter in the upcoming Rucker tournament. But when the hapless manager loses not only his best players but also his wife (Haddish) to the perennial winning coach (Kroll), he prevails upon geriatric Drew for help.

Drew, in turn, embarks on a cross-country road trip, coaxing his long-lost buddies out of retirement for one last hurrah on the court at Rucker. This ain't easy, for a variety of reasons. Big Fella (Shaq) is now the sensei of a thriving karate school. Lights (Miller) is legally blind. Boots (Robinson) now relies on a wheelchair to get around. And Preacher (Webber) has a bat-wielding, disapproving wife (Leslie), plus a church congregation he'll have to abandon to make the trek.

Of course, upon arriving at Rucker, the reunited geezers are practically laughed off the court, at least until they show they still got game. But can the cagey old codgers prevail in the championship match against the youngbloods coached by Dax's trash-talking nemesis? What do you think?

A delightful family comedy guaranteed to keep you in stitches all the way to the satisfying, if not exactly surprising, finale.