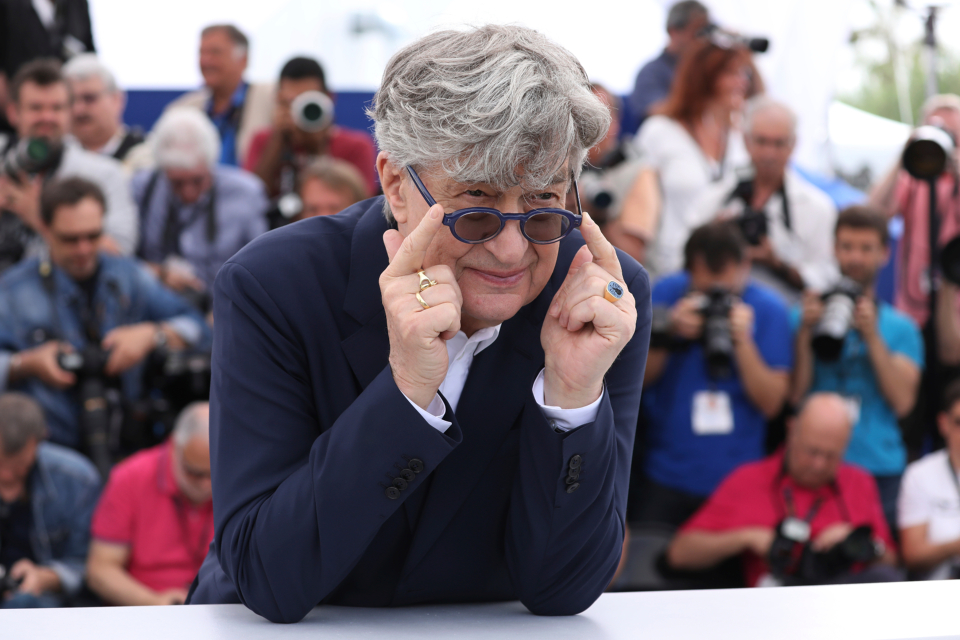 Wim Wenders came to international prominence as one of the pioneers of the New German Cinema during the Seventies and is considered one of the most important figures in contemporary German film. In addition to his many prize-winning feature films, his work as a scriptwriter, director, producer, photographer and author also encompasses an abundance of innovative documentary films, international photo exhibitions and numerous monographs, film books and prose collections.

Wim lives and works in Berlin, together with his wife, Donata Wenders. He studied medicine and philosophy before moving to Paris in 1966 to study painting. Though ostensibly pursuing an apprenticeship in the studio of the graphic designer and engraver Johnny Friedlaender, he spent his afternoons and evenings in the Cinémathèque Francaise. This “crash course in the history of film” would become the most important stage in his education, as he soon began to think of film as an “extension of painting by other means.”

Wim's career as a filmmaker began in 1967, when he enrolled at the newly founded University of Television and Film Munich. While studying there, he also worked as a film critic. Upon graduating from the academy, he founded, together with 15 other directors and authors, the Filmverlag der Autoren, a film distribution company for German auteur films, which organized the production, rights administration and distribution of their own independent films.

He proceeded to embark on an impressive career, during which he has netted a trio of Academy Award nominations for three feature-length documentaries: “Pina,” “The Salt of the Earth” and “Buena Vista Social Club.” Here, he talks about his new film, “Pope Francis: A Man of His Word,” a poignant portrait of the People's Pontiff.

Kam Williams: Hi Wim, I'm honored to have this opportunity for an interview.

Wim Wenders: I’m happy to do it, Kam.

WW: Already, his choice of name blew me away. It takes a lot of courage to take up the name of one of the great reformers and saints of the church, Saint Francis. It stands for a real and radical solidarity with the poor and the outcast, for an entirely different and new attitude towards nature and “our Sister Mother Earth,” as he called our planet tenderly, as well as for a strong stance in creating peace among the religions. No pope had ever dared to address that legacy, and adopting the name of Francis meant nothing less. From the beginning, Pope Francis made it clear that he’s willing to stand up for all these issues and take them all utterly seriously.

KW: How were you able to gain access to him?

WW: That came along with the invitation. You know, it would not have crossed my mind to make a film with Pope Francis if the Vatican hadn’t approached me, asking if I’d be open to discussing that very task. All filmmakers probably take it for granted that this would be an impossible thing to ask, so they don’t even ask. I guess that’s why Dario Viganò, at the time Prefect of the Secretariat for Communication, wrote that letter to me, asking me if I could imagine making a film about Pope Francis, and if I could possibly come by and talk about it. I was flabbergasted, yes, but I definitely could imagine it, yes, as well. When we then talked, it became clear that he meant a film that I would develop on my own, that we would have to find independent financing for, [no, this is not a Vatican production] that I could indeed shoot with access to Pope Francis, and that I would also have full access to the Vatican’s archives. And finally, that this should be entirely my film, and that the Vatican was not going to interfere with it. How could I resist?

KW: How much traveling did you do with him?

WW: I only shot the long interviews sessions with Pope Francis, the re-enactments involving Saint Francis, and everything around the city of Assisi. Traveling along would have completely blown up our small and modest budget. For all the travel footage, I had access to the Vatican archive and to the footage produced by the two really great cameramen who follow Pope Francis on all his journeys. And we used footage from TV stations from all over the world as well.

KW: Did you find his dedication to the poor to be authentic?

WW: No question about it, definitely. He lives and impersonates this dedication. And he makes it clear that he’s not just asking us to consider getting by with less, he does show how it can be done, giving an example by refusing to live in the luxurious apartment where all his predecessors lived and by refusing to drive in big limousines. His modesty and humble appearance are not a show. He is that person and doesn’t have to fake his dedication to and affection for the poor. It is genuine, and he proved that already, from when he was a young priest and then a bishop.

KW: Do you think that he has raised the bar for popes in terms of following in Christ's footsteps?

WW: Yes. By following the example of Saint Francis, who did the very same in his time, really revitalizing the figure of Christ back then. Many thousands of young men soon followed him.

WW: Of course, this is up to each and everybody. But Pope Francis has an enormous emotional power of conviction and of reaching people deeply. With his contagious optimism and positive outlook on life, on spirituality, on our ability to change the world for the better, I haven’t seen anybody who could resist his appeal. I’ve seen non-believers, even hardcore atheists, deeply moved by his words and his sincerity. They all agreed how much truth there is in Pope Francis’ simple message of fraternity and mutual respect.

KW: What was the last book you read?

WW: The last book by Richard Rohr, “The Divine Dance.”

WW: [Laughs] I must have been 3 or 4, coming out of a church service with my parents, holding what I thought was my father’s hand. But when I looked up to ask him something, I saw to my utmost scare, that a stranger was looking down at me. He was smiling and pointed back, and there were my parents following us, laughing. Especially my mother continued giggling forever, and I was mad at her for that. I didn’t think that was funny. Actually, I had nightmares over that situation, and maybe I even remember these nightmares more than the actual event.

WW: I’m a hopeless cook. Apart from pasta with ready-made sauces, please, or a vegetable soup, I can’t handle any dish. However, I’m a dedicated breakfast cook, doing all sorts of eggs to perfection, from boiled exactly the way you want them, to poached to scrambled to sunny side up to omelets and even soufflés.

WW: As a young man, Sherry, I came close to death once. In fact, for myself, I had accepted that I was about to die. I entered a realm of light and sheer joy and only remember that my last thought was, “If only I could tell my parents that they don’t have to be sad!” And the next thing I remember was waking up in an all white hospital room, glad when I understood I was still alive, but also with a strange taste of being almost disappointed. I can safely say that, ever since, I have not been afraid of death. Later, I accompanied my father during the last months of his life, and seeing him face his death with full consciousness, almost looking forward to it, confirmed my absence of fear. And my faith.

WW: A man of seventy-two years old, somehow resembling my father more and more as I get older, but with big bags under my eyes, like my mother had.

WW: A film called “Until the End of the World.” A sci-fi road movie that literally made us travel around the globe, took about one year altogether, and was so stressful and demanding that not all of the crew members had the strength to go “until the end.” It was also a love story, except that the two actors playing that loving couple didn’t even speak to each other anymore. It was hard on everybody, on everybody’s family, too. And when we finally had arrived at the finish line, we were all at the end of our ropes. I swore to never repeat anything like it, even if I’m quite proud of the film as such.

WW: For others or for myself? If it could be for others, I’d need to know for how many. If the wish were just for myself, I’d say: More time! A couple of extra hours every day would be great. Or an extra day per week, especially if that time came with the condition of not working. When God rested on the seventh day and recommended it – better, ordered it – He knew what He was doing. It is just such a hard thing to keep in the digital age. Our time is being stolen from under our feet.

WW: I’m looking forward both to the question and to the answer. But I’m not going to spoil it before! But hey, how about someone asking me if I’d like a dark chocolate sorbet?

KW: Finally, like Samuel L. Jackson asks in the TV ads, what’s in your wallet?

WW: Taxi receipts. Wait, I just need to look. The insurance paper for my e-bike. And money. Boring.

KW: Thanks again for the time, Wim, and best of luck with the film.

WW: After each of our two-hour sessions, before leaving, Pope Francis always said to the entire crew, “Please pray for me.” Who needs luck when you can have a prayer!