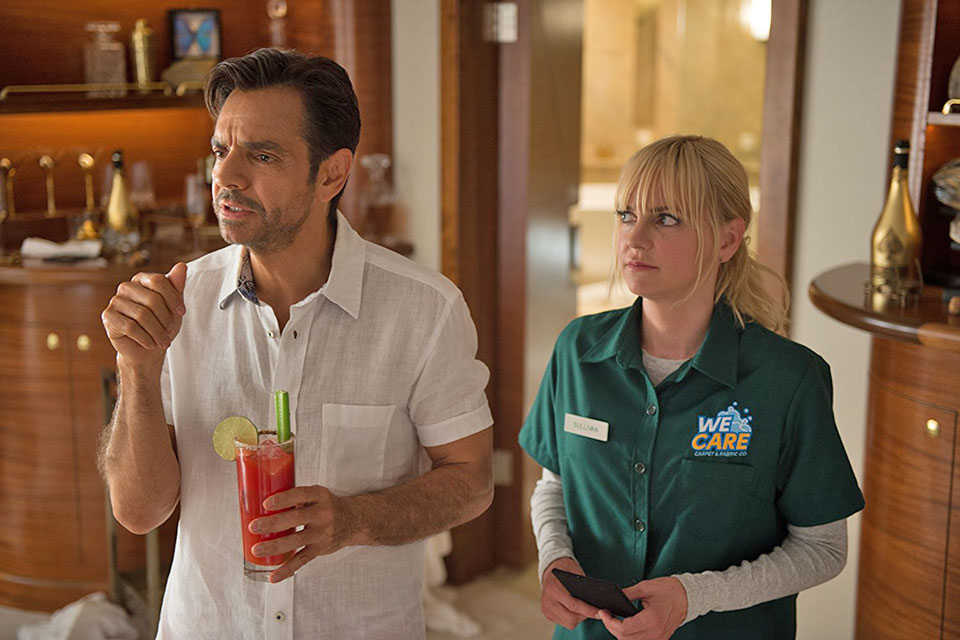 Bad Samaritan (R for violence, drug use, pervasive profanity and brief nudity) A suspense thriller revolving around a car valet moonlighting as burglar (Robert Sheehan) who breaks into the home of one of the restaurant's rich customers (David Tennant) only to find a kidnapped woman (Kerry Condon) tied up there. With Carlito Olivero, Jacqueline Byers and Lisa Brenner.

Overboard (PG-13 for suggestive material, profanity and partial nudity) Romantic comedy, loosely based on the 1987 classic of the same name, flips the script to revolve around a spoiled, filthy-rich playboy (Eugenio Derbez) who is duped by his maid (Anna Faris) into believing they're married when he develops amnesia after falling off his yacht. With Eva Longoria, John Hannah and Swoosie Kurtz.

Tully (R for profanity, sexuality and nudity) Mackenzie Davis handles the title role in this New York City dramedy about a nanny who forges an unlikely friendship with the mother (Charlize Theron) of the three kids she's caring for. With Mark Duplass, Ron Livingston and Elaine Tan.

102 Not Out (PG for mature themes) Bollywood comedy based on a play of the same name about a 102-year-old geezer's (Amitabh Bachchan) attempt to make it into the Guinness Book of World Records as the oldest man alive with the help of his 75-year-old son (Rishi Kapoor). Featuring Jimit Trivedi and Mukesh Hariawala. (In Hindi with subtitles)

The Cleanse (R for profanity and some sexual references) Midlife crisis comedy about an unemployed, heartbroken slacker (Johnny Galecki) who gets a new lease on life when he falls for a fellow lost soul (Anna Friel) at a spiritual retreat with a hidden agenda. With Oliver Platt, Anjelica Huston and Loretta Walsh.

The Con Is On (Unrated) Mob comedy about a couple of con artists (Tim Roth and Uma Thurman) who flee England for L.A. to pull a big jewel heist to repay a debt owed the notorious gangster (Maggie Q) on their tail. Supporting cast includes Sofia Vergara, Parker Posey and Crispin Glover.

The Desert Bride (Unrated) Paulina Garcia plays the title character in this romance drama, set in Buenos Aires, revolving around a 54 year-old housekeeper who falls in love with a traveling salesman (Claudio Rissi) soon after being fired by the family that had employed her for several decades. (In Spanish with subtitles)

The Guardians (R for violence and sexuality) Tale of female empowerment set in rural France during World War I where a matriarch (Nathalie Baye) hires a teenage orphan (Iris Bry) to help her daughter (Laura Smet) work the family farm while the men (Cyril Descours, Nicolas Giraud and Olivier Rabourdin) are fighting on the front lines. Supporting cast includes Glibert Bonneau, Xavier Maly and Mathilde Viseux. (In French with subtitles)

The Son of Bigfoot (PG for action, peril, mature themes and mild epithets) Animated adventure about a teenager (Pappy Faulkner) who embarks on an epic quest in search of his long-lost dad (Christopher L. Parson) only to discover that he's a legendary, ape-like creature.