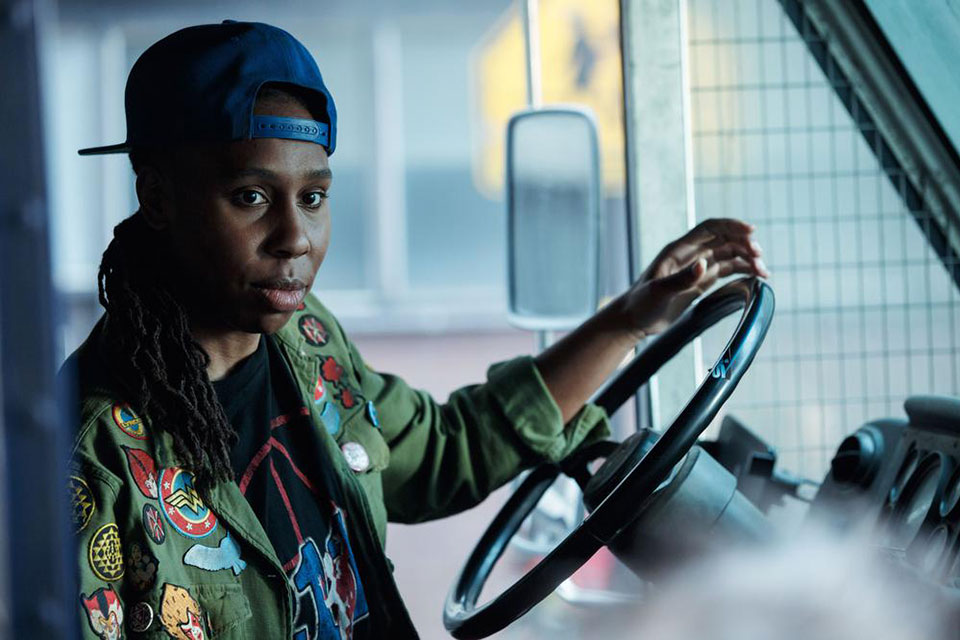 Born on May 17, 1984, Lena Diane Waithe was raised along with her sister on the south side of Chicago by a single-mom. She showed an interest in writing at an early age, and was encouraged to pursue her passion by both her mother and grandmother.

After earning a degree in Cinema and Television Arts from Columbia College Chicago, she embarked on a showbiz career not only as a scriptwriter but as an actress and producer as well. She is probably best known for playing Denise on the Netflix series “Master of None,” although she made history last fall by becoming the first African American woman to win an Emmy for comedy writing.

Openly gay, Lena was named Out Magazine's Artist of the Year for 2017. She is also the creator of “The Chi,” a super-realistic Showtime series set on the south side of Chicago.

Here, she talks about her role as Aech in “Ready Player One,” Steven Spielberg's adaptation of Ernest Cline's young-adult novel of the same name. In the dizzying sci-fi thriller, she plays the protagonist's best friend and member of a team of gamers participating in a virtual reality Easter egg hunt with a grand prize of half a trillion dollars.

Kam Williams: Hey Lena, I'm honored to have this opportunity to speak with you.

Lena Waithe: Oh, I'm honored to speak with you, too, Kam. How are you?

KW: Great! How about you?

KW: Actress, producer, screenwriter. Which hat is your favorite to wear?

LW: I'm a writer first. The acting thing came along because I've been blessed to cross paths with some phenomenal casting directors like Allison Jones, Ellen Lewis [Ready Player One], and Leslee Feldman who runs casting for Amblin Entertainment. These amazing women and God are the reasons why I'm an actor. I believe God orders my steps. He saw this for me, because I definitely didn't see it for myself. I've always been a bit of a ham and a bit of a performer for my friends in my circles, but I never, ever would have pursued it on my own. So, I'm just very grateful to these ladies for seeing something in me. But at the end of the day, I was born a television writer, and I'll die a television writer. That's what I'm most comfortable doing.

KW: Well, congratulations on making history in winning the Emmy for “Master of None.”

LW: Thank you so much, Kam.

LW: I got a call from my agency at the time, saying, "Yo, we got a call about the Steven Spielberg film. They want you to come in and read for it." I said, "Sure. Why not?" So, I went in and read, got a call back to read again, and then I call saying that Steven had chosen me to be Aech in the movie. That was a moment you can't even imagine. Obviously, the biggest draw for me was the director, since I didn't know the book and they hadn't given me the script to read, because everything was very top secret. All I had were some sides. Spielberg is a famous brand, like Coca-Cola. I felt that I could trust him no matter what the project was. And I'm glad I did, because I love the movie and it's already getting a great response. It's a classic Spielberg adventure that you'll never forget. It's phenomenal!

KW: Did you read the novel before you began shooting?

LW: Yes. As soon as I was cast, I got the script and the book. I read the script, which I loved, first. Then I read the novel which I also thought was just phenomenal.

KW: I haven't read the book. How faithful is the film to it?

LW: I think people will have to go to the theater to see, because we have a lotta fans of the book. Steven made a great point today. He said there are about a dozen different movies you could make from the book, because there's so much going on. I'm not sure which of those twelve he would say he chose, but he did what he does best by making a really fantastic film. And I think Ernest Cline's bestseller served as a wonderful blueprint.

KW: How did you prepare to play Aech?

LW: Aech's avatar is this six-foot-tall, half-man, half-robot, very swaggy guy. My influences were Mr. T and Ice Cube. I kept them in mind while I was playing the character, because it's an alter-ego, who you wish you were. And who's cooler than Mr. T and Ice Cube? Nobody!

KW: Did you play video games as a child?

LW: Definitely! I remember my dad buying my sister and me the original Nintendo. I'll never forget that day he brought it to the house. My mom was not happy about it, because nothing got done for the next few months. We were ‘90s kids, so it was a big deal to us. We had a Gameboy and played Tetris all the time, before graduating to Sega Genesis. And we borrowed a friend's Nintendo 64. I went through those different stages of gaming, since it was so easy to get sucked into it. But when I got older, it got a little too complicated for me, because I had homework to do. But I've always had an appreciation of the games. They're a lotta fun, so I get why people do it.

KW: What message do you think people will take away from “Ready Player One”?

LW: That reality is more fun than fantasy. The movie is one, big, great escape. But I think Steven's saying escapism is fine, but that you don't want to escape so much that you lose the appreciation of what's right around you.

KW: Have you managed to maintain a connection to Chicago?

LW: I have a show about Chicago [“The Chi”], so obviously I'm there very often for filming. And my family's still there, too. So, I feel very connected to Chicago. I have a great love for the city, and I strive to portray it in a very honest and human light.

LW: Honestly, I'm not the biggest fan of remakes. If I could've been in a remake, I'd a chosen “Ocean's 11.” I love that movie. And I'm still mad I'm not in the new one, “Ocean's 8.” But Rihanna's holding it down for all the sisters.

LW: Moving in with my grandmother on the south side of Chicago when I was 2. I remember running around a room full of people while she was playing poker or hosting neighborhood watch meetings. I also remember getting excited about going to Dunkin' Donuts and going to see movies like “Teenage Mutant Ninja Turtles” with my dad on the weekend.

KW: The Morris Chestnut question: Was there any particular moment in your childhood that inspired you to become the person you are today?

LW: Hmm... I think there were numerous things that inspired me. TV shows like “Family Matters” and “A Different World,” and movies like “Jurassic Park” and “Forrest Gump.” I remember wanting to live in those spaces for a long time, not knowing that ultimately I would want to create stories that would make people feel the way I had felt watching those shows and movies. I was always happiest when we were going to the movie theater, no matter what we were going to see. I liked the idea of sharing that experience with a group of people I'd never met and would probably never see again.

LW: I can't think of one. But you've asked some good ones.

LW: My Soho House card, my Amex and my driver's license.

KW: Thanks again for the time, Lena, and best of luck with “Ready Player One.”

LW: Thanks so much, Kam.