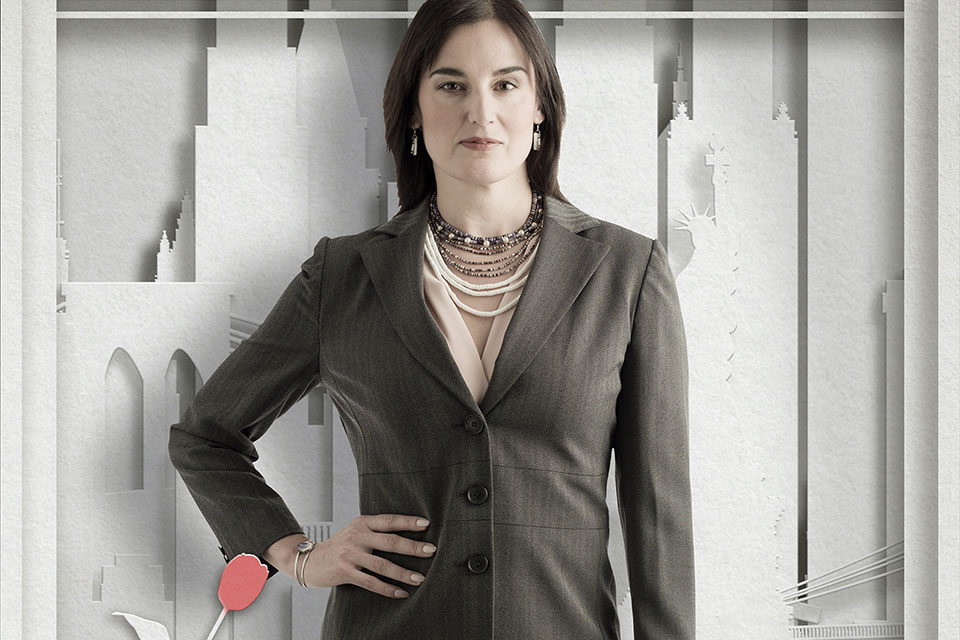 The Oregon Shakespeare Festival will present the world premiere of Manahatta by Mary Kathryn Nagle, directed by Laurie Woolery, on April 1, 2018, in the Thomas Theatre. Preview performances are March 28, 30 and 31, and the play runs through Oct. 27.

In Manahatta, Nagle—a playwright, activist, attorney and Citizen of the Cherokee Nation of Oklahoma— illuminates the tragic consequences of commercial exploits, including the removal of Native people and the attempted eradication of their culture, that gave rise to the America we know today. This world-premiere play tells the story of Jane Snake, a brilliant young Lenape woman with a Stanford MBA. Jane reconnects with her ancestral homeland, known as Manahatta, when she moves from her home with the Delaware Nation in Anadarko, Oklahoma, to New York for a job at a major investment bank just before the financial crisis of 2008. Jane’s struggle to reconcile her new life with the expectations and traditions of the family she left behind is powerfully interwoven with the heartbreaking history of how the Lenape were forced from their land. Both old and new Manahatta converge in a brutal lesson about the dangers of living in a society where there’s no such thing as enough.

Scenic design for Manahatta is by Mariana Sanchez, costume design is by E. B. Brooks and lighting is by James F. Ingalls. Paul James Prendergast is composer/sound designer, Mark Holthusen is sound designer, Elizabeth Frankel and Leslie Ishii are dramaturgs and Rebecca Clark Carey is voice and text director. Ty Defoe is movement director, U. Jonathan Toppo is fight director and Curtis Zunigha is Lenape consultant. Karl Alphonso is production stage manager and Molly Norris is assistant stage manager.

Manahatta runs through Oct. 27, 2018 in the Thomas Theatre. Tickets are available at the OSF Box Office, via phone at 800-219-8161, or online at osfashland.org. Prefaces for Manahatta will be offered March 31, April 7, April 21 and 28, at noon in Carpenter Hall. Tickets and information are at osfashland.org/FestivalNoons. More engagement programming will be offered when the Summer Festival Noons series returns June 19–Sept. 2, 2018.

A sign-interpreted performance is scheduled for May 26 at 8 p.m. Contact the Box Office at 800-219-8161 or email boxoffice@osfashland.org to purchase tickets in the Deaf Community section; these tickets not available online. Information on additional accessibility accommodations is at osfashland.org/Accessibility.

Manahatta is one of three plays by indigenous women on major Oregon stages this year. The Thanksgiving Play, by Larissa FastHorse (Sicangu Lakota) will be performed at Artists Repertory Theatre April 1 - April 29. And So We Walked, written and performed by DeLanna Studi (Cherokee), will run at Portland Center Stage at the Armory March 31 - May 13. The three playwrights will participate in a series of panel discussions around Portland in April:

OSF’s full 2018 playbill includes Othello, Sense and Sensibility, Destiny of Desire, Rodgers and Hammerstein’s Oklahoma! and Snow in Midsummer in the Angus Bowmer Theatre; Henry V, Manahatta and The Way the Mountain Moved in the intimate Thomas Theatre; and Romeo and Juliet, The Book of Will and Love’s Labor’s Lost in the outdoor Allen Elizabethan Theatre.