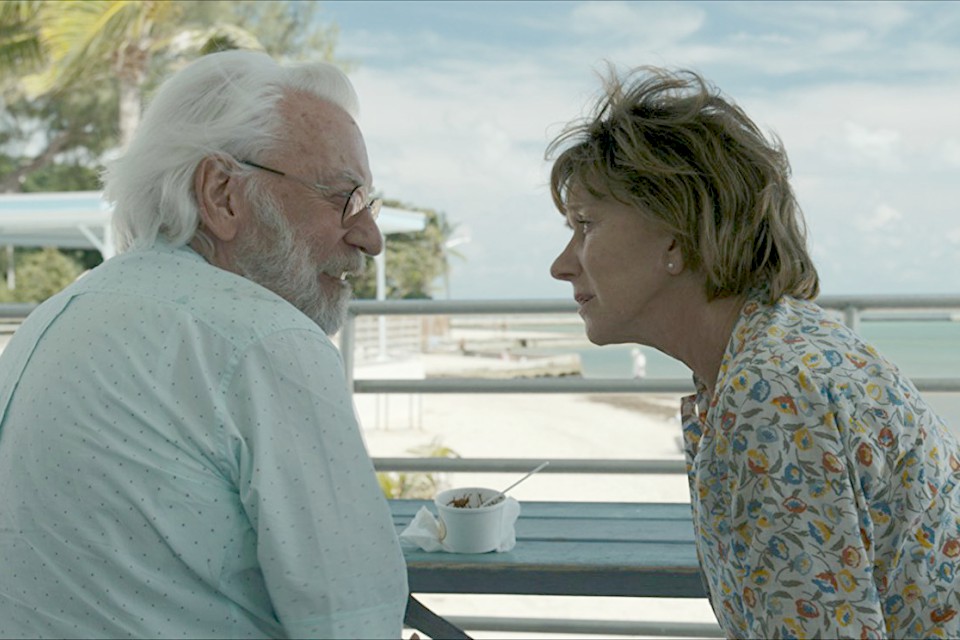 Ella (Helen Mirren) and John Spencer (Donald Sutherland) have been happily married for more than 50 years, and their love hasn't been diminished one iota by his battle with dementia or by hers with brain cancer. Therefore, it makes sense that the inseparable couple might resist following sound medical advice calling for them to move into different healthcare facilities.

Instead, the feisty octogenarians decide to share one last vacation in their mothballed RV fondly referred to as "The Leisure Seeker." The plan is to drive all the way from Wellesley down to Key West where John, a retired English professor, hopes to visit the home of Ernest Hemingway.

So, without letting their doctors or doting kids (Janet Moloney and Christian McKay) in on what they're up to, the sneaky geezers pack provisions and a shotgun before taking to the highway in their trusty Winnebago. What ensues is a very eventful road trip fueled by a mix of tenderness, nostalgia and a little gallows humor.

Thus unfolds The Leisure Seeker, a bittersweet romantic romp directed by Paolo Virzi (“Like Crazy”). The movie marks the shaky first foray into English-language features by the talented Italian filmmaker.

Virzi's very lucky that he has a couple of consummate thespians playing the leads. Helen Mirren disappears into her role, sporting a thick drawl as a sunny Steel Magnolia originally from South Carolina. And Donald Sutherland is quite convincing as an intermittently-lucid Alzheimer's victim lecturing strangers about literary greats one minute, lost in his thoughts the next.

The story is loosely-based on Michael Zadoorian's bestseller of the same name which originally had the Spencers as Detroit natives and setting out for Disneyland. Here, Ella and John enjoy their fair share of excitement en route to Florida from New England, including a confrontation where exercising their 2nd Amendment rights comes in handy, as well as a hilarious encounter with a geriatric patient played by the late Dick Gregory making a memorable cameo.

A touching travelogue with just enough heartfelt moments combined with comic relief to warrant this critic's stamp of approval.