A Talkative Kareem Abdul-Jabbar Reflects on Becoming Himself 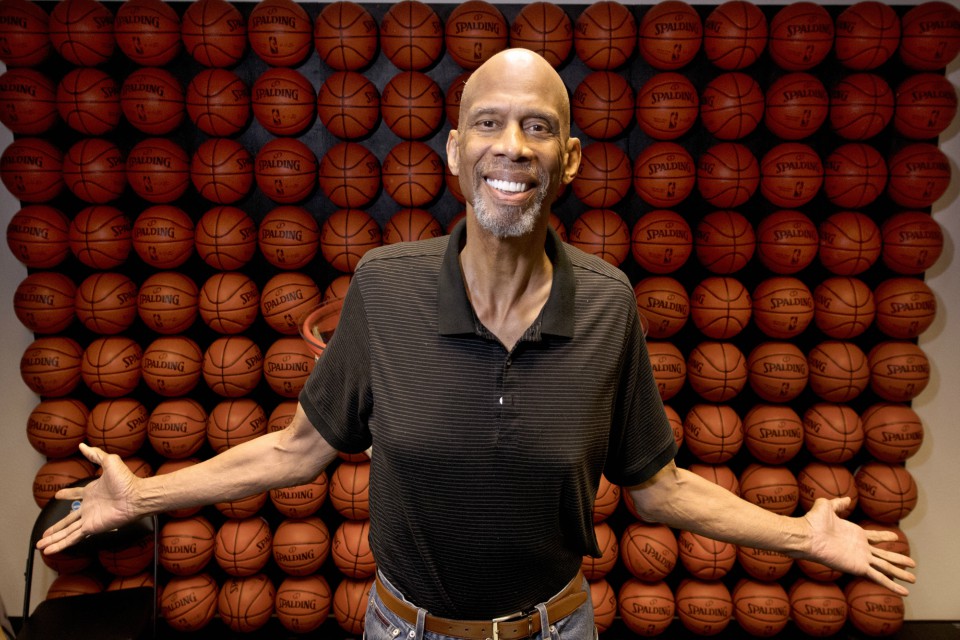 NEWPORT BEACH, Calif. — Kareem Abdul-Jabbar has been a best-selling author, civil-rights activist, actor, historian and one of the greatest basketball players who ever lived.

One thing Abdul-Jabbar has never been — at least not in public — is chatty.

"I'm not known for being a blabbermouth, you know?" the soft-spoken Abdul-Jabbar concedes with a smile, something else he was never particularly known for during his playing days. But, he adds, still smiling, his public can expect to see that change — and soon.

This fall Abdul-Jabbar will embark on a cross-country tour as part of "Becoming Kareem," a stage show in which he'll discuss his life, answer audience questions and talk about the key mentors he says helped him achieve his goals. Among them: civil rights heroes Malcolm X and Martin Luther King, his legendary college coach and lifelong friend John Wooden, and fellow superstar athletes Muhammad Ali and Wilt Chamberlain.

The tour was inspired by the 2017 best-seller "Becoming Kareem," a memoir of his years from childhood to age 24.

Inspirational, poignant, funny and occasionally heartbreaking, it recounts the coming of age of a bright and hardworking but painfully introverted kid, one who was always the tallest in class.

And although he didn't realize it until looking closely at a class photo taken in the third grade, he was often the only black kid in class, a circumstance that in later years would expose him to repeated episodes of ugly racism, no matter his fame or success, that would leave deep emotional scars that sometimes took decades to heal.

He kept his game face on, both on and off the court, and persevered through setbacks and successes.

"I did the book because I thought that the process that I went through could be very useful for young people right now," Abdul-Jabbar told The Associated Press during a wide-ranging interview this week at the offices of the Skyhook Foundation, the charitable nonprofit he created several years ago to provide educational opportunities for elementary school children, the same group he targeted his book for.

After its publication, sports broadcaster Roy Firestone, a longtime friend, suggested he share those experiences directly with live audiences, telling him his words would not only resonate with young people today but provide a chance for Abdul-Jabbar to clear up some lingering misconceptions dating to his playing days. The clipped, seemingly curt answers he often gave during postgame interviews, for example, frequently came across not as shy but as surly, especially coming from someone who stood an intimidatingly tall 7 feet, 2 inches.

"And that was very unfortunate," Abdul-Jabbar says softly now. "I think it kept me from a head coaching job and commercials and stuff because people wanted to assume the worst."

Not that he hasn't had a storied life and career before and after basketball.

Abdul-Jabbar played on six NBA championship teams, was an assistant coach for two others, won a record six MVP awards   and is the leading scorer in NBA history with 38,387 points, a mark that's never been seriously challenged in the 29 years since he retired.

He's written more than a dozen books ranging from children's adventure novels to histories of prominent African-Americans to crime novels featuring the adventures of none other than Mycroft Holmes, older brother of Sherlock.

"I enjoyed Sherlock Holmes from when I was a kid," he recalls, adding with a robust laugh that until high school he actually believed the master detective was a real person. Learning he was Arthur Conan Doyle's creation, he concluded the author gave short shrift to Mycroft and set out to fix that a few years ago. His second Holmes book came out last year, and he's working on another.

"That and this tour will hopefully keep me pretty busy," he said as he sat in a chair in his spacious office.

It's an office filled with memorabilia commemorating not only his basketball career but his African-American roots and his work as a civil-rights advocate. Sitting near NAACP Image Awards are dozens of basketballs, many autographed by members of the Showtime-era Los Angeles Lakers teams he helped lead to five championships in the 1980s. On the walls are posters of him launching his signature skyhook shot over the likes of Charles Barkley and guarding Bill Walton.

The sounds of jazz, the beloved soundtrack of Abdul-Jabbar's life, play softly through the office until he silences them to talk. (His father, Ferdinand Lewis Alcindor, whose name he shared before changing his in his early 20s upon his conversion to Islam, was not only a New York City police officer but a talented jazz musician.)

If not as shy as he once was, Abdul-Jabbar is still somewhat guarded in conversation, although he can be playfully funny as well.

Yes, he confirms with a grin, it's true that after President Donald Trump sent him a name-calling note for criticizing Trump, he crumpled it into a ball and skyhooked it into a wastebasket.

Although he suffered from leukemia that's now in remission and underwent quadruple bypass surgery three years ago, Abdul-Jabbar looks little different than he did during his playing days, appearing trim and athletic in Tommy Hilfiger jeans and an open-necked shirt.

"Well, you know, seeing how there is no alternative — I'll take it," he says of turning 70 last year. "But I don't know about that 'life begins at 40' stuff. What happened at 40 is I started getting old."

"There is something wrong with that scenario," he adds, laughing again.