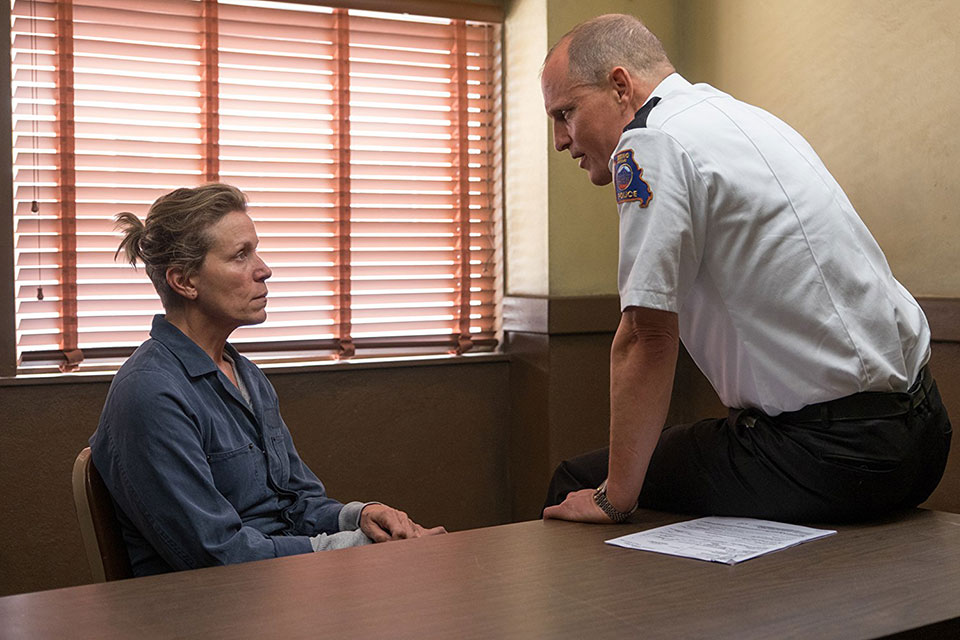 Twenty years ago, Frances McDormand won an Academy Award for “Fargo,” a delightful whodunit set in a tiny Minnesota town inhabited by a cornucopia of colorful local yokels. In that Coen Brothers' black comedy, she played a dedicated police chief who was tireless in her efforts to crack a murder case, despite being pregnant.

“Three Billboards Outside Ebbing, Missouri” is a similarly dark mystery set in the Midwest that's also full of folksy characters. But this go-round, McDormand plays Mildred Hayes, the mother of a teenager (Kathryn Newton) whose beaten and raped corpse was found lying in a ditch along a lonely stretch of road.

It's been seven months since the slaying, and the Ebbing police seem to have lost interest in apprehending the perpetrator. So, in order to light a fire under the department, Mildred rents a trio of billboards near the murder scene on which she asks Chief Bill Willoughby (Woody Harrelson) in 20-foot-high, block letters why he hasn't yet made an arrest.

Unfortunately, the ploy backfires. Yes, it embarrasses the chief. However, it also generates public sympathy for him, given how everybody in the tight-knit community knows he's been battling pancreatic cancer.

Undeterred in her quest for justice, Mildred subsequently prevails upon Willoughby's dimwitted deputy (Sam Rockwell) to pick up the ball. But Dixon's a revenge-minded racist who'd rather hassle than help the mom in mourning while arresting African American citizens for minor infractions of the law.

Written and directed by Oscar-winner Martin McDonagh (for “Six Shooter”), Three Billboards outside Ebbing, Missouri is a thought-provoking social satire which paints a chilling, yet plausible, portrait of just what it might be like to fight an entrenched patriarchy comfortable with a status quo favoring white males.

Look for Frances McDormand to land another Oscar nomination for a superb performance where she convincingly conveys the profound distress of a grief-stricken mother desperate for answers.