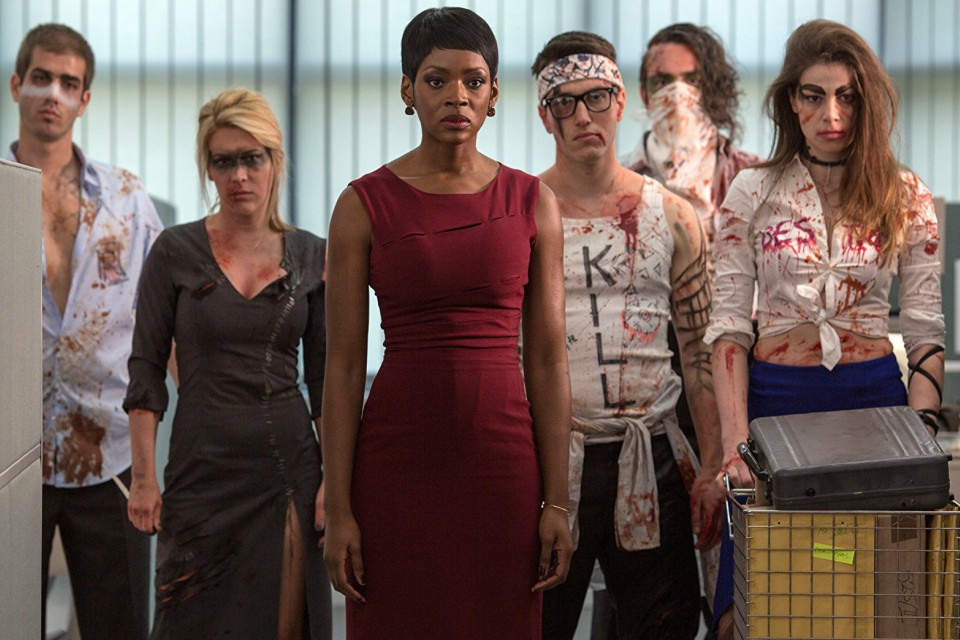 Attorney Derek Cho (Steven Yeun) was a rising star working his way up the corporate ladder at Towers and Smythe when he was blindsided by a false accusation of making a million-dollar mistake. He was callously fired on the spot by the sadistic director of operations (Caroline Chikezie) and escorted by the heartless Grim Reaper (Dallas Roberts) to the basement of the building where he was pressured to sign a confession as a condition for receiving a severance package.

It's obvious he'd been stabbed in the back by a colleague at the cutthroat law firm. But he has no idea who it was. While weighing his options, he swaps sob stories and forges an alliance with Melanie Cross (Samara Weaving), a client also screwed over by the firm.

Before the two can be kicked to the curb, they're afforded an opportunity to even the score, thanks to divine intervention. For, an outbreak of Red Eye has the authorities sealing the offices of Towers and Smythe, with no one being allowed to either enter or leave the building.

The highly-contagious virus sweeping through the ventilation system is not fatal, but it does cause those infected to act out their primal impulses, whether violent, sexual or elsewhat.

So, the Center for Disease Control orders the skyscraper quarantined for the next eight hours, the time it will take for the antidote to take effect.

Meanwhile, Derek and Melanie's infection not only makes them morph from model citizens into bloodthirsty killing machines, but conveniently provides an excuse for their ensuing reign of terror, namely, the virus made me do it. Soon, the pair proceed to track down their enemies to dispatch them, one-by-one, with a variety of unorthodox implements, ranging from buzzsaw to nail gun.

Directed by Joe Lynch ("Wrong Turn 2: Dead End"), "Mayhem" is a sophisticated social satire that might be best described as a compelling cross of "Office Space" (1999) and "The Purge" (2013). Lynch has deftly blended the wry, anti-establishment wit of the former with the temporary lawlessness of the latter into a riveting, revenge-fueled splatterfest you won't ever forget.

A righteous bloodbath in the boardroom!