OSF Play “Mojada: A Medea in Los Angeles” to Open at The Armory 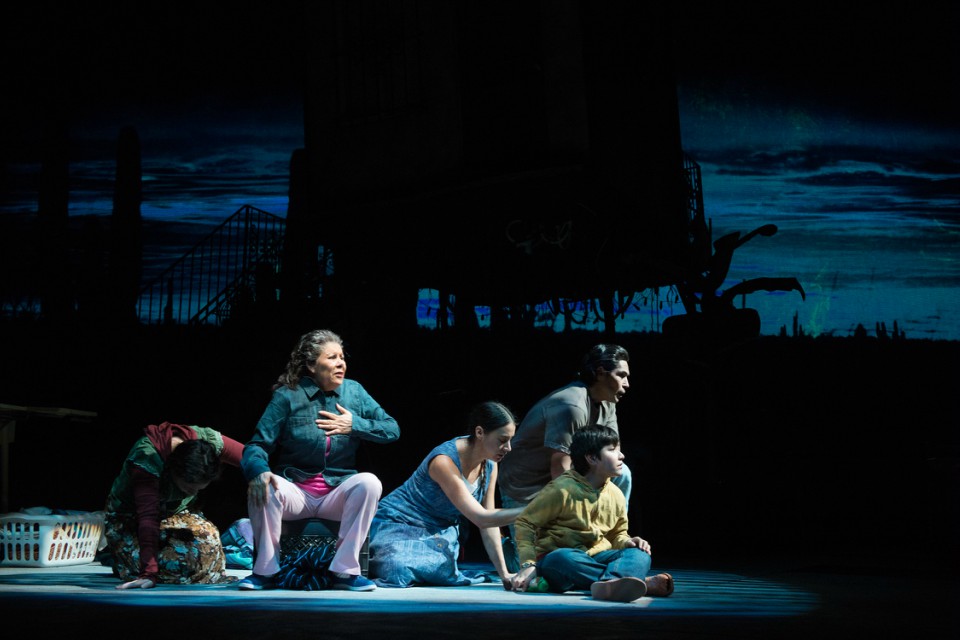 After a six-months run at the Oregon Shakespeare Festival, “Mojada: A Medea in Los Angeles,” officially opens on Nov. 10 for a limited-engagement run.

Written by Chicago playwright Luis Alfaro and directed by Juliette Carrillo, the play is an interpretation of the ancient Greek tragedy “Medea” -- a story of love, vengeance and transformation.

Alfaro’s version, however, is set in modern-day Los Angeles, where Medea and her immigrant family struggle with new life in America. The three-week run at The Armory features the same cast as the Oregon Shakespeare Festival production.

Los Angeles-based actor Sabina Zuniga Varela was awarded the best lead performance award  for her portrayal of Medea by the Los Angeles Drama Critics Circle. The Skanner spoke with Varela about the connection between people and their land from her native New Mexico. This interview has been edited for space and clarity.

Previews of “Mojada: A Medea in Los Angeles” begin on Nov. 4 and performances run until Nov. 26.  For more information visit: www.pcs.org/mojada

The Skanner News: The original ancient Greek play “Medea” is a story of love, betrayal and revenge. Luis Alfaro’s “Medea” interprets that play through the lens of Mexican immigrants coming to the United States. How does the original text lend itself to the modern retelling?

Sabina Zuniga Varela: I feel like the tragedy of Medea, in terms of the Greek literature, is actually one of the most misunderstood. Folks like to zero in on Medea’s revenge – a woman’s revenge. But what it’s actually about – the root of it – is a woman who is removed from her land. And when a people is removed from their land or loses the connection to their land, there’s a lot of angst and a lot of identity problems and issues that can stem from that – when we don’t know where we’re from or we’re fighting to be a part of something. I think we see it with immigrants and we also see it with what’s going on with White America.

So Medea was from a place originally and then was removed from it. After she helped Jason (her husband who leaves her for the Greek princess of Corinth) and the Argonauts perform all these heroic feats, she ended up in this land where she was “the other.” In the original text, a lot of the characters use this language against her as “the other.”

So actually, that original is an immigrant story, but it’s also a tragic love story that does result in revenge. The Greek people have a big connection to land. And a lot of tragedy happened – even the Trojan War – when people were removed from land. It’s what caused a lot of bloodshed. So I actually think (this version) is right on. I think Luis has found the root of what this story actually means. I would say the major difference between the two is that is does not focus on the revenge. Instead, “Mojada” focuses on what happens to a person when everything is stripped from them, starting with their land and going to their family. It’s been interesting to be able to explore that classic.

TSN: What kind of training or research did you undergo to prepare for the lead role of Medea?

SZV: Of course reading the classic is a must, to understand the root of this epic tale. But there have been some really interesting studies that have gone on. Amnesty International put out a report on immigrant and migrant patterns – and it reported that 60 percent of Central American and Mexican women coming up north into the United States were victims of sexual assault. Then in 2014, there was another investigation that said it was about 80 percent of women that are undergoing this. So I would dive into a lot of reports about women who migrated up. For the performances in Oregon, I read this book called “The Devil’s Highway.” It’s a fantastic nonfiction account which focuses on 26 men coming north from Mexico, and it really gets into the day-to-day of their journey. I believe only 14 of them survived. So that book got into the elemental struggles of what it takes to come across, in terms of water and weather and heat stroke. It helped me get into the actual physical journey of it, because one of the key scenes of the play, about a third into it, is the border-crossing scene.

TSN: Given the ongoing immigration debate in the U.S., do you find “Mojada” to be more relevant now that is was when you first performed it in Los Angeles back in 2015?

SZV: Absolutely! I feel like it’s almost found itself and its relevance, unfortunately because of what’s happening right now. But what’s happening right now has been happening for centuries, yet we have this historical amnesia. I have to say, the production in Oregon gave those of us in the play a really wonderful interaction with the audience, because there’s something special about the Oregon Shakespeare Festival. When people go to see shows there they hang for a couple of days. So you end up interacting with the audience in a way that you don’t with most regional theater. So we got to do a lot of amazing talkbacks, I got to work with students. (The themes) are everywhere – they’re intergenerational and global. It’s the story of “the other” and that journey to find safety and home and connection.