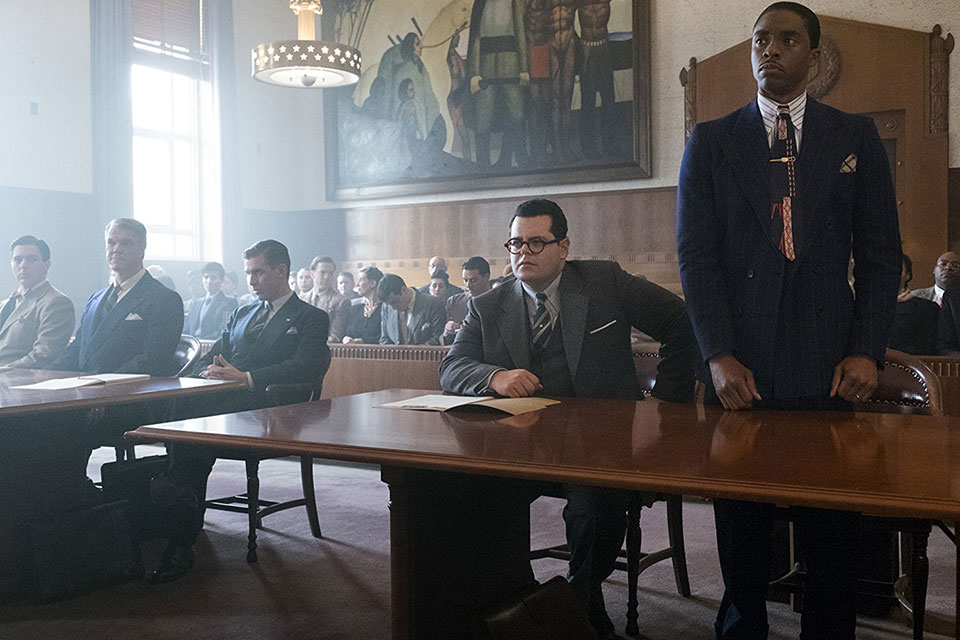 Prior to becoming America's first African American Supreme Court Justice, Thurgood Marshall (Chadwick Boseman) enjoyed a legendary legal career as a civil rights lawyer. While serving as chief counsel for the NAACP, he argued before the U.S. Supreme Court 32 times, most notably, the landmark Brown v. Board of Education case ending segregation in public schools.

This makes one question director Reggie Hudlin's (“House Party”) thinking in having his biopic about the beloved icon revolve around a criminal trial from 1941, when he was still establishing himself. What's even more curious is that Marshall wasn't allowed to interrogate witnesses or even speak in the courtroom by the racist judge (James Cromwell) presiding over the proceedings, because he wasn't a member of the bar in the State of Connecticut.

So, instead of seeing Marshall work his magic, we have to settle for watching him quietly orchestrate his strategy with help of a Caucasian colleague (Josh Gad), who's rather reluctant to get involved. That would be Sam Friedman, a local yokel afraid of jeopardizing his flourishing insurance practice by defending a Black man accused of raping a white woman.

After all, the case was splashed across the tabloids, and the accused had already been convicted in the court of public opinion. The basic facts were as follows. On December 11, 1940, a Greenwich socialite named Eleanor Strubing (Kate Hudson) was either raped or had consensual sex four times with her chauffeur, Joseph Spell (Sterling K. Brown), while her husband (Jeremy Bobb) was out of town.

Because she was wealthy, White and well-connected, the police and the prosecutors believed her story, and promptly arrested the employee. But because her account of what transpired had some Swiss cheese-sized holes in it, the NAACP decided to assign the case to its only attorney, the peripatetic Thurgood Marshall.

Granted, Chadwick Boseman, who played Jackie Robinson in “42” and James Brown in “Get On Up,” delivers another impressive impersonation as Marshall, at least when he's not muzzled. But it's hard to get very enthusiastic when the passionate protagonist is rendered mute at critical moments while a wimpy proxy whose heart isn't into it does all the talking.

Thurgood at 32, but once removed, as channeled by a nerdy mercenary.