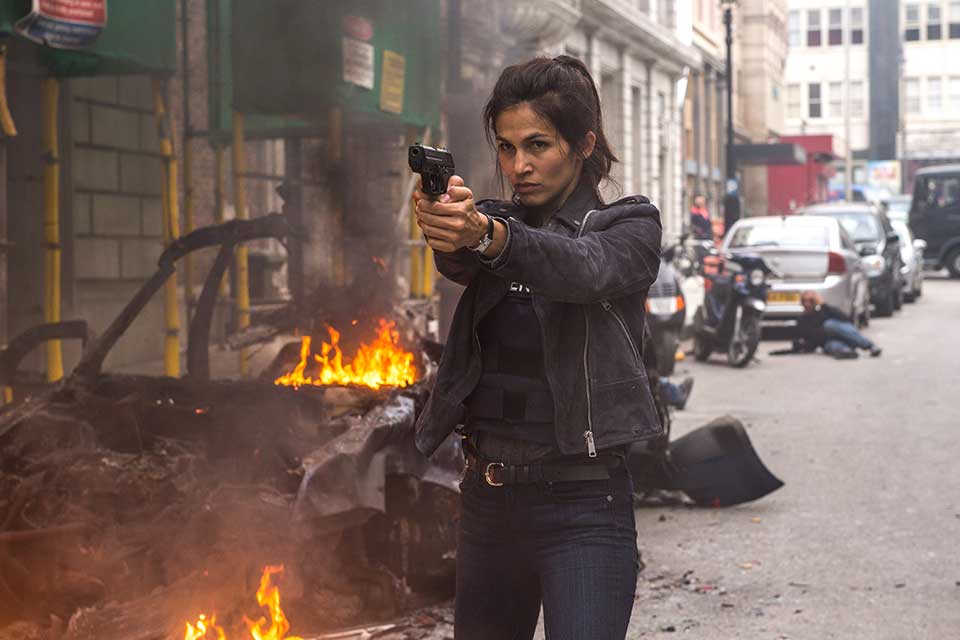 After earning a law degree in France where she was born and raised, Elodie Yung realized that she wanted to pursue her lifelong passion of acting instead. That led her to study theater and earn a degree from the London Academy of Music and Dramatic Arts.

Elodie booked work right out of school, first, as a recurring character in the serial drama La Vie Devant Nous and, then, in the highly-regarded drama Fragile(s), which premiered at the 2007 Cannes Film Festival. That led to what would be her breakout roles as ‘Laura Maurier’ in the French TV series Les Bleus, and as the female lead in the feature film District 13 Ultimatum where she showcased her extensive martial arts skills.

Elodie subsequently set her sights on Hollywood, where she was tapped by director David Fincher to play ‘Miriam Wu’ in The Girl with the Dragon Tattoo. Next, she landed the lead role of ‘Jinx’ in GI Joe 2: Retaliation opposite Dwayne Johnson. More recently, she starred in Gods Of Egypt, an adventure fantasy about a common thief who joins a mythical god on an epic quest.

On TV, Elodie starred as the superhero 'Elektra' in the second season of the Emmy-nominated Netflix series Daredevil. And she is currently reprising that role in The Defenders, a spinoff series which premiered on Netflix on August 18th.

Here, Elodie talks about both that show and her new film, The Hitman's Bodyguard, where she plays Interpol Agent 'Amelia Roussel' opposite Samuel L. Jackson and Ryan Reynolds.

Kam Williams: Hi Elodie, I'm honored to have this opportunity to speak with you.

Elodie Yung: No, it's my pleasure, Kam.

KW: Your accent reminds me that my wife just got back after spending a week in the South of France. She went to Provence for a wedding.

EY: Oh, it's beautiful in Provence. Have you been there?

KW: No, unfortunately. But enough about me. What interested you in playing Amelia?

EY: First of all, I wanted to do this comedy because Ryan [Reynolds] and Sam [Jackson] were attached to it, and Salma Hayek as well. And when Gary Oldman joined the cast, I felt that I just had to be a part of the project filled with people that I really admire. I also liked the script which I found to be a very clever comedy in the way they reversed the male-female dynamic. There are no damsels in distress in this movie. Instead, Salma's character is shouting at Sam's all the time. And I'm giving Ryan lots of directions and telling him what to do. I love that aspect of the movie, and I thought it was an inspired idea to pair Ryan and Sam. They had great chemistry and were really funny together.

KW: How did you prepare to play Amelia?

EY: Since she's an Interpol Agent, I had to make sure I knew how to handle a weapon. And to make sure it looked realistic, we had someone on the set to make sure I held the gun correctly. I'd been working on TV series [Daredevil] where I did a lot of action, so I just needed to stay in shape by running and going to the gym every day, but nothing too crazy.

KW: Editor/Legist Patricia Turnier would like to know: What message you want people to take away from the movie?

KW: You have an intriguing background in that you not only studied acting and law but earned a black belt in karate. How do you explain that mix?

EY: Well, karate was something I did as a kid, because I grew up in a part of France that wasn't so nice. My father suggested I try it, and I really enjoyed it and the competition. Later, when I studied law at the university, I didn't have much time for anything else. And acting happened sort of randomly, because I needed to make money. I didn't really want to be an actress, at first, but I stuck with it because I really liked it.

KW: Tell me a little about reprising the role of Elektra on the new, Netflix spinoff series, The Defenders. Didn't your character die on the old series, Daredevil?

EY: Yes, but Alexandra, played by Sigourney Weaver, brings me back to life. This time, I'm basically teaming up with some other superheroes to save New York from a threat.

KW: You've been very successful in action films. However, you are obviously very intelligent and versatile. Are you concerned about becoming typecast. What would be your dream role?

EY: I would love to try something besides the action genre, like playing a lawyer. I'm really willing to play anything. I'm drawn to complex characters, and I'm up for any type of challenge. So, hopefully, my next role will be a very interesting. But you never know what you're going to get.

KW: This has certainly been a banner year for female empowerment films: The Zookeeper's Wife, The Beguiled, Wonder Woman and Girls Trip, to name a few.

EY: We talk a lot about it. This is a good thing for us. We have as much to offer as men.

EY: The blue wallpaper with apples in the small apartment in a suburb of Paris where I grew up. That's my first memory.

EY: I like sliced potatoes in fine layers with creme and garlic, and baked with cheese on top.

EY: It depends on the day. Let me have a look. Today, I see someone with no makeup who's sweating, since she just came from the gym.

EY: Ooh, it's hard to answer that. For the red carpet, I like Christian Dior, because they know how to make clothes for petite women like me. And they know how to be classic and edgy at the same time. I like what they do.

EY: They're quite opposite. That's why I like the red carpet. You can really have fun expressing a different side of yourself. I'm normally very low-key. At home, I just wear my dirty jeans and a t-shirt with no makeup. You'd think I was a different person, I guess.

EY: When I used to go on holiday with my parents as a child, we'd stay in a house with other people. One of them had a machine that played old movies, and I became fascinated by the original King Kong.

EY: When I'm with my loved ones.

Perseverance is one key. And do what you like.

EY: Perseverance is one key. And do what you like.

EY: I'd like to be able to be in different places at the same time. I always miss my family and friends in France, my sister in Germany, my brother who travels a lot, my dad who is in Cambodia. I would like to duplicate myself and be with all of them at the same time.

EY: I would probably be a human rights lawyer.

EY: That makes me feel like I'm about to die. Give me about 15 years and maybe I can answer the question. Is that okay?

KW: Of course. I understand. Finally, what’s in your wallet?

EY: [Laughs] Nothing really special. A few dollars in coins.

KW: Thanks again for the time, Elodie. I really enjoyed both the movie and our chat.