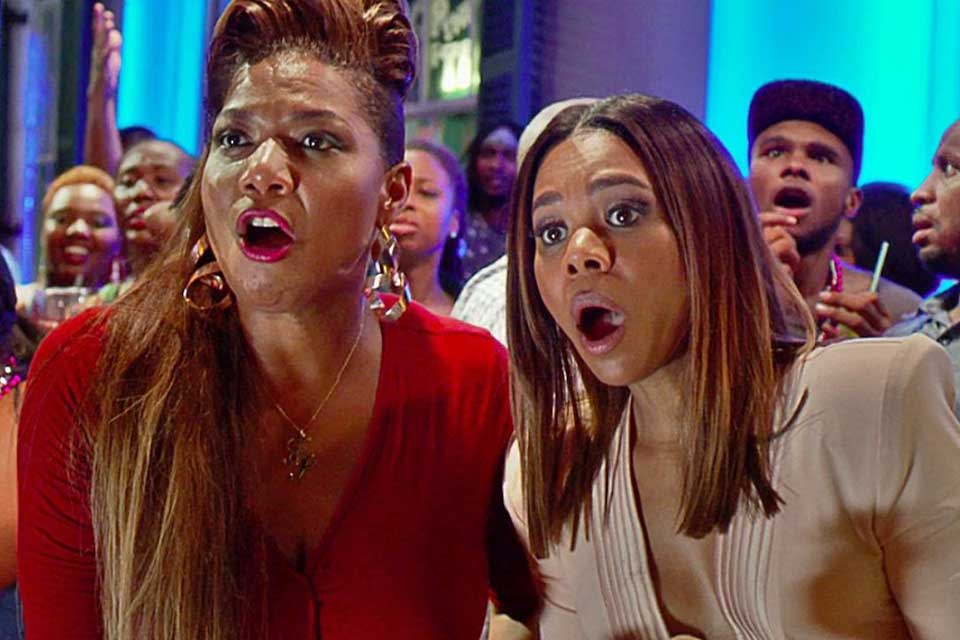 Regina Hall launched her career in the late 1990s while still earning a master's degree from New York University. The accomplished actress will soon appear in “Naked,” a remake of the 2000 Swedish film “Naken.” The romantic comedy co-starring Marlon Wayans is set to be released on Aug. 11.

In 2016, Regina appeared opposite Morris Chestnut in the suspense thriller “When the Bough Breaks.” Earlier that year, she was seen on the big screen in “Barbershop: The Next Cut” an ensemble comedy also featuring Ice Cube, Cedric the Entertainer, Common, Eve and Nicki Minaj.

Regina's other outings include “The Best Man,” “The Best Man Holiday,” “Think Like a Man” and “Think Like a Man Too.” She also starred in “About Last Night,” a remake of the 1986 film of the same name. Among her additional film credits are “Scary Movie” and its three sequels, “Paid in Full,” “Malibu’s Most Wanted” and “First Sunday.” And she was seen in “Law Abiding Citizen,” “Death at a Funeral,” “Love & Basketball” and “Disappearing Acts,” too.

On television, Regina recently made guest appearances on “Grandfathered” and “Black-ish.” In January 2015, she starred in the Lifetime film “With This Ring.” Her other TV credits range from “Married” to “Law & Order: LA” to “Ally McBeal.”

Kam Williams: What interested you in playing Ryan Pierce?

Regina Hall: I think it was just the way her character develops. I was drawn to her journey as a woman who seems to have it all, who has this public persona as a celebrity, yet can get together with her girlfriends and be wild.

KW: Was there anyone you based her on?

RH: Not on any one person, but on a mix-up of people.

KW: What was it like being directed by Malcolm [Lee] for the fourth time?

RH: It's always great working with him and Will [producer Will Packer]. It's such a collaborative process. It's fun being directed by Malcolm because he knows me, and I know how he likes to work. There's a lot of trust. I feel comfortable asking questions, and We can sit down and talk through things

KW: And how was it working with Jada, Tiffany and Queen Latifah?

RH: It was great. It's so special to get to work with women you've respected for so long, and to get to know them as people. It was like we were on a real girls trip.

KW: Had you done anything with Larenz Tate before?

RH: No, but he's great. I loved working with him. I hadn't worked with Mike [Colter] or Kofi [Siriboe] before either. They were all fabulous.

KW: Editor/Legist Patricia Turnier asks: How do you feel about the Essence Music Festival?

RH: It's a great resource and a great place to have fun. It's the epicenter for black women that time of year. You can meet people from all over. It has great concerts and New Orleans has amazing food. Yeah, I love the Essence Festival!

KW: Patricia was wondering whether there is an African American icon you would like to portray?

RH: Hmm... that's a great question, Patricia. Yes, there are one or two I don't want to reveal. I don't think anybody has heard of them.

KW: Patricia also asks: What message do you want people to take away from “Girls Trip”?

RH: I think it's about sisterhood, and being true to yourself and to who you are. The movie's also about friendship. You come to care about these characters because we have a real bond and a real love for each other. Hopefully, people take away that message.

RH: I love the city. I've shot there several times before. The people are so warm. The food is a little bit too tasty. I try to arrive about 5 pounds underweight, so I can gain a few while I'm there. That way, I won't look too heavy on camera. I always gain weight when I'm there. But I love New Orleans because it has a lot of heart and a lot of soul, and very beautiful people who are always so kind.

KW: Patricia concludes by saying: You went to college before your acting career. You obtained a master's degree in journalism. Many kids think they do not need an education to make it in the entertainment industry. How has your education benefited you professionally?

RH: It served several purposes. It helped me to break down and understand scripts. And the discipline of getting my master's gave me a certain amount of confidence. I don't think college is the only path, but I enjoyed it and it worked out very well for me. I had some good friends with whom I could get a little crazy, but still be responsible. It was the perfect bridge from living at home to independence. I also love learning. I might have been a professional student and earned a couple of doctorates, if I didn't have to pay bills.

KW: It's unfortunate how expensive college has become, putting higher education out of the reach of most children.

RH: That is sad. Education ought to be affordable for everybody. That only advances a society.

KW: What was your very first job?

RH: I can't remember if I worked in a movie theater or at Constitution Hall in DC first?

RH: I honestly don't know if I could pick just one. There are so many. That list is long.

RH: I really do love King Kong. Hope he saves a black woman next time, instead of falling in love with a little blonde lady.

RH: Once, my roommates and I had a cab driver who offered to take 50 cents off for every article of clothing we removed. Now, I wonder why we didn't get out of the taxi. But, I guess that's the sort of thing you can get talked into when you're 19.

KW: How much clothing did you take off?

RH: Not much, since there were three of us. Just our shoes and socks.

KW: Mike Pittman asks: What was your best career decision?

RH: Doing Scary Movie, even though there were some people who thought it would hurt my career, after “The Best Man” and “Love & Basketball.” But it was a good decision to do something different, because it opened other doors.

RH: I don't know... Something with animals. I'd probably be in Borneo, holding an orangutan.

RH: Probably an orangutan. I love orangutans. There so much fun, and there so close to us in DNA. and they're so cute with that hair on their heads that sticks up. And their females are the longest nursing of all animals. they love their babies, even though their habitats are being destroyed for palm oil.

KW: Thanks again for the time, Regina, and best of luck with “Girls Trip.”

RH: Thank you so much, Kam.