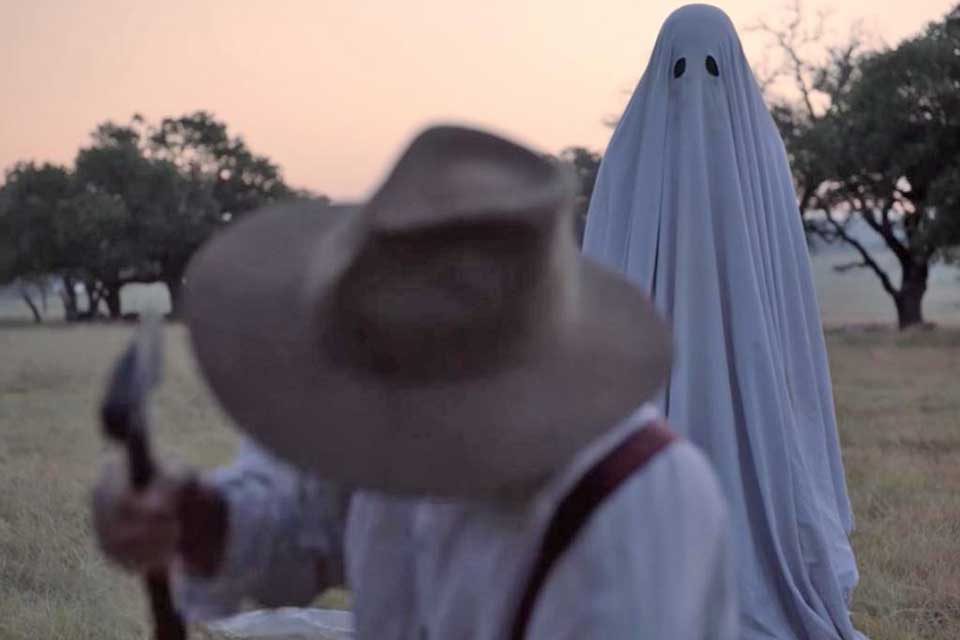 C (Casey Affleck) and M (Rooney Mara) are a nondescript young couple living in a modest ranch house in suburban Texas. Nothing of note transpires between the happily-married lovebirds besides carnal canoodling interrupted by things that go bump in the night.

The next morning, bliss turns to tragedy when he suddenly passes away in a car crash at the mouth of their driveway. Grief-stricken M is summoned to the morgue where she only lingers long enough to identify her husband's body.

But as soon she leaves, matters enter another dimension when the ghost of C miraculously stands up and walks out of the place under the white sheet covering the corpse. Like a homing pigeon, the disembodied spirit proceeds to make his way back to his humble abode, deliberately traipsing across a rolling, verdant field to take the most direct route.

By the way, C's flowing white linen covering (with a couple of eyeholes conveniently poked out) has somehow been rendered invisible to the naked eye. This ghost is mute, so there's no "Honey, I'm home!" when he literally walks through the door.

M mourns, oblivious of C's ethereal presence, despite his hovering over her obsessively. He might be frustrated by his inability to make contact. Or he might just want to protect. It's hard to tell, since he never talks. Then, when she vacates the premises, he stays behind, and starts to spook the new residents, as if scaring them away might bring his wife back.

Thus unfolds “A Ghost Story,” a pretentious speculation on loss from the perspective of the dearly departed. The tortoise-paced production might be best described as a series of stark, shadowy tableaux, like an Edward Hopper painting come to life.

The picture was written and directed by David Lowery (Pete's Dragon), and co-stars a couple of consummate thespians in Oscar-winner Casey Affleck (for Manchester by the Sea) and two-time nominee Rooney Mara (for “Carol” and “The Girl with the Dragon Tattoo”). The pair's considerable talents are underutilized, here, since Casey's hidden under a Halloween costume 90 percent of the time, and Rooney's character disappears about halfway through the movie.

Though Casey is earnest in his attempt to convey a range of emotions from under the sheet, ultimately, it's the cinematic equivalent of watching a little kid try to fight his way out of a paper bag.