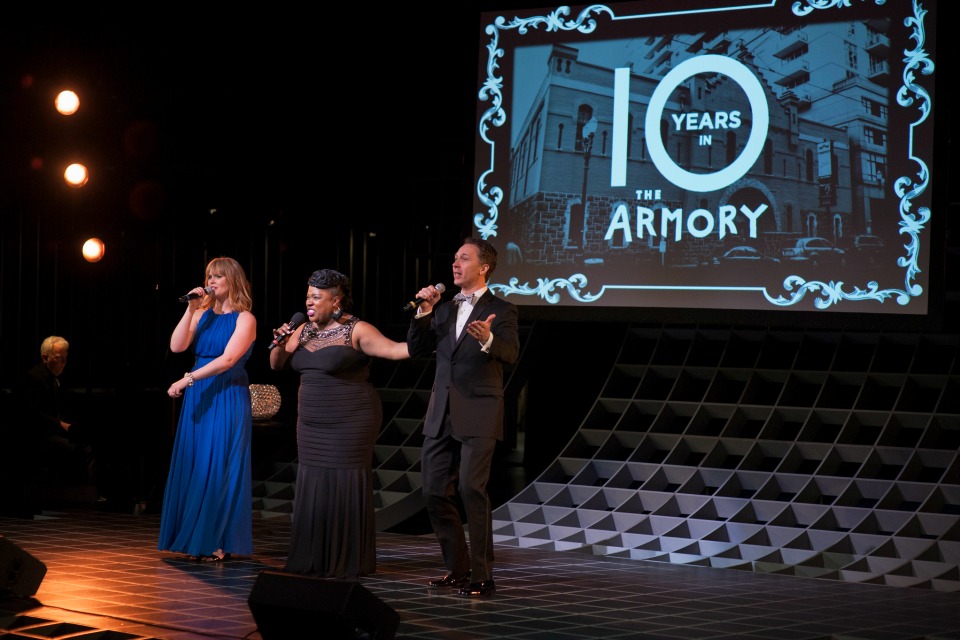 Portland Center Stage at The Armory
Published: 30 May 2017

Portland Center Stage at The Armory celebrated its 10th anniversary in its home at The Armory with a record-breaking fundraising gala titled “Diamond in the Pearl.”

More than 400 of the organization’s most dedicated supporters were in attendance, including many of the people that were instrumental in helping transform The Armory into the LEED-Platinum theater facility that opened its doors in 2006 and is now visited by 150,000 people annually.

The guests raised $700,650 to support Portland Center Stage at The Armory’s mission of inspiring our community by bringing stories to life in unexpected ways. It was the most successful fundraiser, and the largest attendance for a gala, in the company’s history.

Artistic Director Chris Coleman kicked off the evening’s entertainment by surprising guests with his own rendition of a song from West Side Story, which was the very first production presented by Portland Center Stage when The Armory opened its doors to the public in 2006.

The musical medley continued with performances from Maiesha McQueen (who recently starred in His Eye is on the Sparrow at The Armory), Michael Deleget and Leah Yorkston singing favorites from musicals presented by the company during its 10 years at The Armory.

CELEBRATING 10 YEARS AT THE ARMORY

In the past 10 years at The Armory, 1,455,485 visitors have attended a play, including 54,503 students who received free or deeply discounted tickets. The company has produced 110 theater productions at The Armory – including 11 world premieres – offering a total of 4,770 performances on the two stages, the U.S. Bank Main Stage and the Ellyn Bye Studio.

Beyond its productions, Portland Center Stage has sent teaching artists to 270 schools in the past 10 years, where students have learned the basic elements of theater and written 1,408 plays.

A video highlighting Portland Center Stage’s 10 years in The Armory can be found at https://vimeo.com/211749588.

Next season, Portland Center Stage at The Armory will celebrate its 30th Anniversary as Portland’s leading professional theater company.

The 30th Anniversary season lineup will include Fun Home, Every Brilliant Thing, Mojada: A Medea in Los Angeles, A Christmas Memory paired with Winter Song, The Second City’s A Christmas Carol: Twist Your Dickens, Astoria: Part Two (featuring reprise performances of Astoria: Part One), Kodachrome, The Magic Play, And So We Walked, Major Barbara and Lady Day At Emerson’s Bar And Grill.

The 2016-2017 season is funded in part by Season Superstars Tim and Mary Boyle, and Lead Corporate Champion Umpqua Bank. Further support comes from Season Sponsors: Regional Arts and Culture Council, The Wallace Foundation and Oregon Arts Commission, a state agency funded by the state of Oregon and the National Endowment for the Arts.

Mark Spencer Hotel is the official hotel partner. Portland Center Stage at The Armory was selected as a participant of the Wallace Foundation’s Building Audiences for Sustainability Initiative, a four-year effort with a nationwide cohort of 26 performing arts organizations.