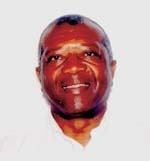 Ronaldo Mazyck, owner and operator of Paper Chase Shredding and Recycling: Service Minority Business Opportunity Committee's Service Contractor of the Year for 2007.
Owned and operated by Ronaldo Mazyck, Paper Chase Recycling Service is an independent locally owned shredding and recycling service. Started by Mazyck in 1987, Paper Chase is a leader, visionary, advocate and change agent for recycling.
Passionate about the environment and dedicated to protecting it for future generations, Mazyck's goal is to encourage more companies to recycle instead of throwing waste into landfills. The company has recycled upwards of 25,000 tons of paper in the last twenty years thus reducing waste and saving energy.
In 1995, Paper Chase was awarded the Minority Business Supplier of the Year Award by the Northwest Region of the Small Business Administration.