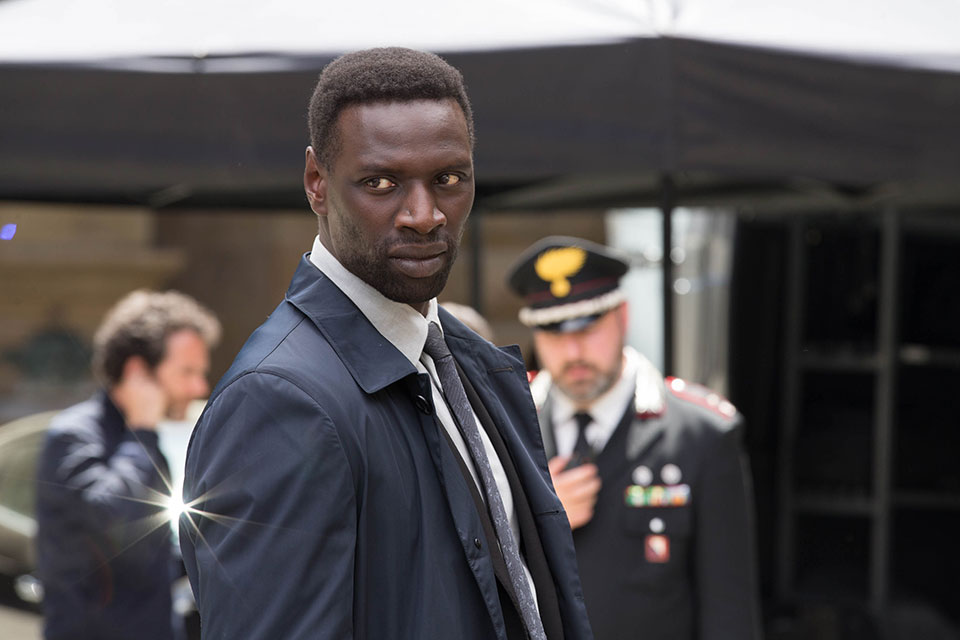 Omar Sy is an award-winning actor, comedian, comic writer and television personality who has established himself as an international star. With over 30 screen credits on his impressive resume, Omar became a household name after the smash hit “The Intouchables,” his third collaboration with directors Olivier Nakache and Eric Toledano.

His performance in that film earned Omar a César for Best Actor in 2012, and the movie went on to gross over $425 million worldwide. And he subsequently re-teamed with Nakache and Toledano in 2014 for “Samba.” This December, he will be seen in Hugo Gélin’s “Demain Tout Commence.”

Over the last several years, Omar parlayed his success in Europe into Hollywood productions, starring in “X-Men: Days of Future Past” with Hugh Jackman, Jennifer Lawrence, and Michael Fassbender, as well as Colin Trevorrow’s “Jurassic World” with Chris Pratt. Both films went on to achieve the highest worldwide box office grosses in their respective franchises.

Kam Williams: Hi Omar. I’m honored to have this opportunity to speak with you.

OS: It was the fact that I would have an opportunity to work with a wonderful and amazing director in Ron Howard, and with a legendary actor in Tom Hanks at the same time. Also, I don’t want to spoil the story, but I liked the script and the idea of playing a character without a smile for the first time.

KW: Especially since you started out as a comedian.

OS: Yes, as actors, we’re always looking for some challenges, and playing a character like Christoph, with a twist, in a very dark thriller, was a big challenge for me. And on top of everything, it was in English.

KW: I enjoyed this film more than the first two in the franchise, primarily because it had more action and less talk..

OS: Ron made Rush prior to “Inferno.” Rush had a lot of action scenes. Maybe he learned from that experience. Also, perhaps because so many people are interested in the issue of overpopulation, we needed less dialogue explaining it, since they were already familiar with the topic.

KW: What would you say is the movie’s message?

OS: The movie explores the issue of overpopulation, and the fact that there are several ways to solve it. Each character has his solution. I think the movie’s message is that to solve the problem, the humanity community needs to unite and find a global answer.

KW: Editor/Legist Patricia Turnier says: I consider you to be the Sidney Poitier of France. How did you feel when you won the Best Actor cesar in 2012 for “The Intouchables,” which made you the first Black French actor to achieve the honor?

OS: When I won, it was really a special moment in my life, and I knew it would change everything after that. But I never thought about being the first Black actor to win, even though everybody else talked about that. If I stop to think as a Black actor, people will see me differently. If I play as a Black actor, people will only see that. I think my key was to perform as an actor, not as a Black actor. And after winning the Cesar, I was an actor with a Cesar. there are many more adjectives to describe who I am. I’m not only Black. When I won the Cesar, I was, first of all, an actor. I have to say, it’s humanity first. That’s the future. We have to stop seeing the skin color. I believe that’s the most powerful way to change mentalities and behavior. I had to stop seeing myself in such a limited way. I started doing that as a teenager, and here I am today, because of that. I believe that’s the best way to change things for Black people.

KW: Patricia also says: You probably met naysayers at the beginning of your career. How did you manage to stay focused and not be deterred by their negativity? In addition, what message do you have for aspiring actors who want to achieve a successful longevity like you?

KW: Finally, Patricia says: You have the great ability to play in movies in different countries, given that you speak several languages. The late Senegalese director Ousmane Sembene was one of my favorite African filmmakers. Would you be interested in the future to perform in Wolof and play a historical figure such as Léopold Sédar Senghor or Cheikh Anta Diop?

OS: Of course! Cheikh Anta Diop is not a Wolof. He is Fula, and I am Fula. I am fluent in Fula, so it would be easier for me to play Diop. As I said, actors are always looking for new territory, and playing an African figure would be really a great symbol for me because of my Senegalese roots. It would make my parents proud, so of course I’d do it.

OS: Eating, singing and dancing at a family reunion. I remember a lot of people celebrating in a very small space. When I think of my parents’ home, that is the ambience that comes to mind. I loved that, and it will always be a part of my life.

OS: Yes, because of my African roots, my parents raised us with a philosophy to always believe that there was something bigger than us, beyond.

OS: [Laughs heartily] It’s difficult to describe yourself. You will always be wrong. Only your family or friends can describe you properly. We all have a wrong idea of ourselves. I am always changing, and I will continue to change. So, I never try to describe, define or judge myself.

OS: No. Everything’s been asked. I’ve been interviewed by so many journalists from many different countries.

KW: Harriet Pakula-Teweles asks: With so many classic films being redone, is there a remake you’d like to star in?

OS: Yes, but I’m not prepared to share it in the papers. I will do it. it’s just a matter of time.

OS: Yes, they’re all dreamers. A dream becomes an idea and then something concrete. I think it all starts with a dream.

OS: I cannot say in a newspaper. [LOL]

OS: The shark in “Jaws.” That was the first monster that really, really scared me. After seeing it, I learned how to swim, because I wanted to be able to escape.

OS: No, because it was really simple. My goals were to be happy and to make things easier for my parents, which I think I did.

OS: Maybe I’m a little more serious at home because I want to instill good values in my kids. At home, there is often no time for jokes. On the red carpet, I’m always joking.

OS: I just want to be a good memory, especially for my kids.

KW: How do you juggle five kids and your career?

OS: I have a wonderful wife. [Laughs]

OS: My California driver’s license and a credit card. That’s it!

KW: Thanks again for the time, Omar, and best of luck with the film.

OS: Thank you so much, Kam.