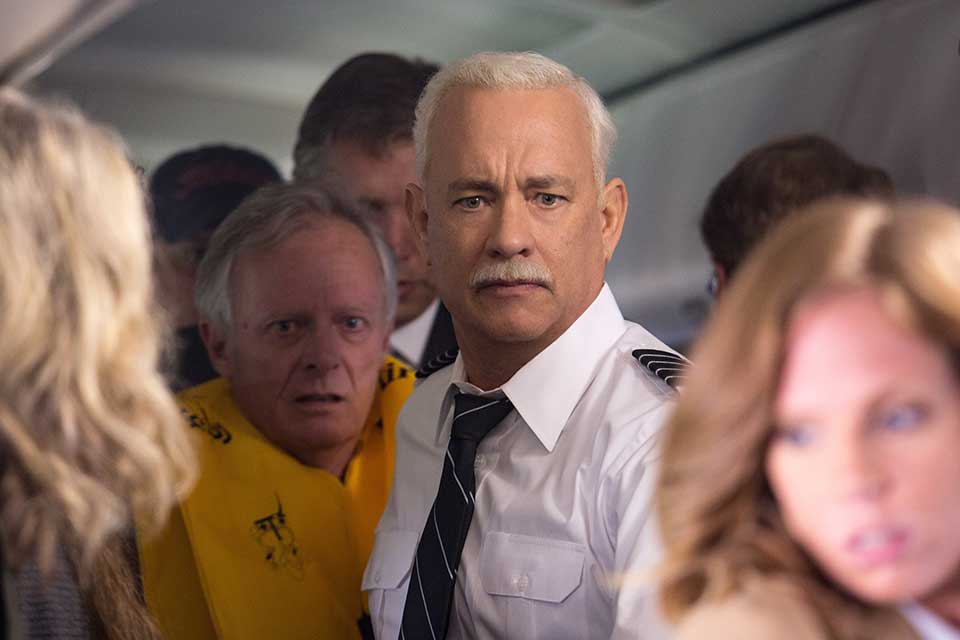 US Airways Flight 1549 had barely taken off from New York's LaGuardia Airport on the afternoon of January, 15, 2009 when it sighted Canada geese flying in its path at about 2,800 feet. The Airbus 320 was unable to avoid the flock and the ensuing strike disabled both of its engines.

At that point, Captain Chesley "Sully" Sullenberger immediately took control of the powerless plane from co-pilot Jeff Skiles (Aaron Eckhart) and informed the tower of his dire predicament. After weighing his options in the next few seconds, Sully ignored air traffic controller Patrick Harten's (Patch Darragh) suggestion to return to LaGuardia in favor of the fateful decision to ditch the crippled jet in the Hudson River.

Thanks to a combination of calm seas and the veteran Captain's years of experience as both a glider pilot and flight safety instructor, the plane managed to make a smooth landing without triggering a fire or disintegrating upon impact. Instead, the 155 souls aboard found themselves simply floating downstream as the cabin slowly filled with icy water.

Sully ordered his passengers and crew to disembark into the inflatable life rafts and onto the wings where they were soon rescued by the commercial ferries and emergency vessels rushing to the scene. Amazingly, not a single life was lost in the crash quickly dubbed the "Miracle on the Hudson."

Directed by Clint Eastwood, Sully revolves around not only a reenactment of the death-defying stunt but around the subsequent investigation by the National Transportation Safety Board. What we learn here is that while Captain Sullenberger was publicly being celebrated as a national hero under an avalanche of positive press, the wisdom of his water landing was simultaneously being questioned behind closed doors by the NTSB's brass.

It seems that the specialists assigned to investigate the matter suspected that the missing Flight 1549 engine sitting at the bottom of the sea might have been operational, meaning the plane could have been brought down on terra firma without incident. If this were the case, then a reprimand rather than acclaim would be in order for Sully. Ultimately, divers did locate the left engine, thereby enabling the government bureaucrats to belatedly confirm that the second-guessed skipper did deserve his many accolades after all.

Kudos to the team of Clint Eastwood and Tom Hanks for successfully conveying the enviable amalgam of guts, smarts and stoicism exhibited by level-headed Captain Sullenberger in the face of impending demise. Pack the Kleenex, if you plan to stick around for the film's closing credits featuring an oh so sweet reunion of the real-life Sully and many of the grateful folks whose lives he saved.