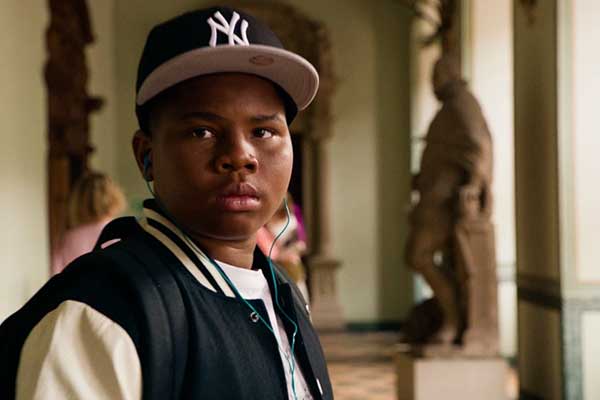 It's hard being Morris Gentry (Markees Christmas) just now. The lonely 13-year-old is not only mourning the loss of his late mother, but is having a difficult time adjusting to life in Germany. He had to leave his hometown of Richmond and pals behind when his father (Craig Robinson) landed a job in Heidelberg as a professional soccer coach.

Now, the troubled youngster finds himself in the awkward position of being the only Black kid in a school where classmates have stereotypical expectations of him as an African American. For instance, they are surprised that he isn't any good at basketball or dancing.

At least he does consider himself an aspiring gangsta rapper, although the only person he can impress is his father, since he only performs in English. But even his translated words would probably sound out of place so far removed from the ghetto, given how he writes lyrics about, "[F-word]-ing all the bitches two at a time. all you can take for $10.99."

Despite getting daily German lessons from a tutor (Carla Juri), Morris fails to make new friends, and stoically asserts that he doesn't need any in the same macho manner that he spits out his rhymes. Yet, under that tough facade, is a sensitive kid who wants to fit in and even has a crush on a girl a couple years older.

Katrin (Lina Keller) can't help but notice and, flattered by the attention, she invites Morris to hang with her crowd, a rebellious lot that dabbles in drugs and alcohol. He accepts the overture, though he initially doesn't know that the object of his affection already has a boyfriend. That means she's more likely to remain a frustrating fantasy than a conquest he could boast about in his next song.

Written and directed by Chad Hartigan (This Is Martin Bonner), Morris from America is a bittersweet bildungsroman which never hits a false note. The character-driven dramedy revolves mostly around the very-convincing father-son relationship, featuring the talented Markees Christmas' big screen debut opposite funnyman Craig Robinson in his first serious lead role.

The support cast also acquits itself quite admirably, the upshot amounting to a poignant coming-of-age tale which resonates as realistic from its heartbreaking beginning clear through to a satisfying resolution.