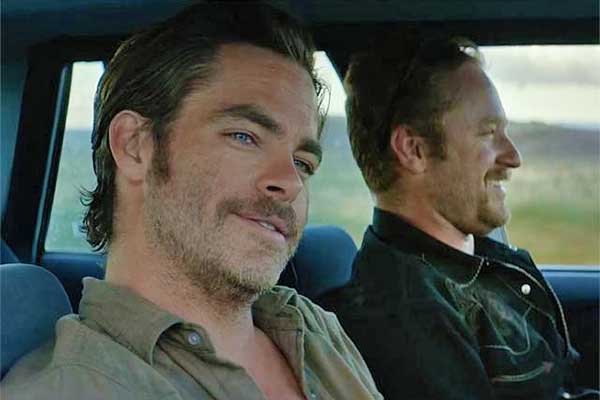 Tanner (Ben Foster) and Toby Howard (Chris Pine) are siblings but about as different as night and day. The former is impulsive, reckless and sociopathic, a combination which helps explain why he's spent a long stretch in prison for a violent crime. By comparison, his younger brother is a relatively stable, sensitive and chivalrous soul.

While Tanner was behind bars, divorced Toby has divided his time between raising his two sons (John Paul Howard and Christopher W. Garcia) and caring for his terminally-ill mother. So, it's no surprise that upon his mom's recent demise, she cut that ne'er-do-well black sheep of the family out of her will entirely, leaving her sizable estate to her only honorable offspring.

Unfortunately, a shady loan officer (Richard Christie) had duped her into taking a reverse mortgage on her cattle ranch for a pittance. Consequently, a predatory lending institution is holding a lien on land which Toby has just learned is sitting atop a fortune in untapped oil reserves. But unless the note is paid off by Friday, Texas Midlands bank will follow through on its threat to foreclose, "Come hell or high water."

Toby wants to save the property and sign it over to his boys. Trouble is, he can't raise the cash. The dilemma has him considering breaking the law for the first time in his life.

Enlisting the assistance of his just-paroled brother, he hatches a plan to rob Texas Midlands branches until they've raised the amount needed to retire the debt. The two proceed to embark on a spree aimed solely at the avaricious institution that had taken advantage of their very vulnerable mom.

However, the heists soon come to the attention of the Texas Rangers, and the case is assigned to Marcus Hamilton (Jeff Bridges) a wily old veteran weeks away from retirement. It's not long before he and his half-breed Comanche partner (Gil Birmingham) are on the pair's trail.

Thus unfolds Hell or High Water, a captivating, cat-and-mouse crime thriller directed by Brit David Mackenzie (Starred Up). Between Taylor Sheridan's (Sicario) engaging, character-driven script and a plethora of powerful performances by Jeff Bridges and company, this bona fide sleeper would be generating tons of Oscar buzz if it hadn't been released in the dog days of August.

A neo-noir masterpiece not to be missed!