Film Review: ‘The Fight Within’ a Touching Tale of Redemption 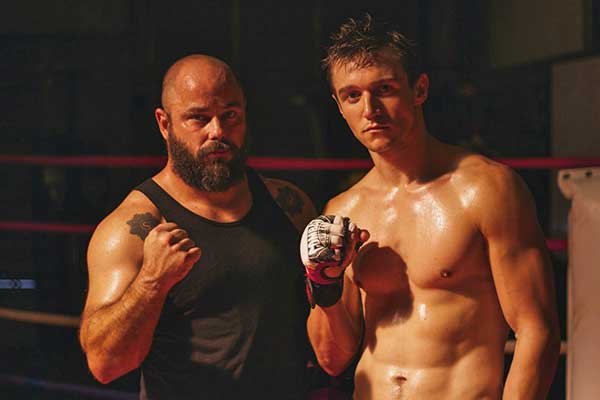 Logan (John Major Davis) and Mason (Mike H. Taylor) have been doing their best to move on with their lives since the death of their father (Dan Severn) a couple years ago from a heart attack. But that has proved easier said than done, since their dad, Rich "The Destroyer," had been the Mixed Martial Arts Heavyweight Champion.

Upon his retirement, Rich had opened a gym which he left in his will to both his sons. However, while Mason had been willing to assume the reins of the business, Logan found himself looking for something more meaningful in life, despite the fact that he'd exhibited promise as an MMA cage fighter.

In fact, he's the only person who'd ever beaten Hayden Dressler (Matt Leddo), the otherwise undefeated Middleweight Champ. And with Hayden aching to avenge that loss, a decent payday might be in the offing.

Nevertheless, Logan has turned a new leaf, between studying Ethics in college where he's made the acquaintance of Emma (Lelia Symington), a cute, Christian classmate from the other side of the tracks. She proudly wears her faith on her sleeve and talks freely about her calling to mission to orphans in Mozambique.

Between Emma's beguiling beauty and his curiosity about God, Logan finds himself falling for her hook, line and sinker. Soon, he's ready to leave the rough fight game, the only world he's ever known, behind.

Trouble is there's a big promoter willing to sponsor a rematch with Hayden who has been teasing him about being afraid to enter the ring with him again. Furthermore, Mason has hinted that he sure could use a share of the purse to stabilize the gym financially. Only after receiving sage advice from a homeless old man (Wesley Williams) about what Jesus would advise does Logan grudgingly agree to the showdown.

Thus unfolds The Fight Within, a faith-based variation on Rocky directed by Michael William Gordon. Although the movie doesn't really break any new ground in terms of romantic, overcoming-the-odds sports flicks, it remains recommended as Evangelical fare that's more entertaining than heavy-handed.

Solid proof that you can get the girl, the prize money and salvation, provided God's on your side.