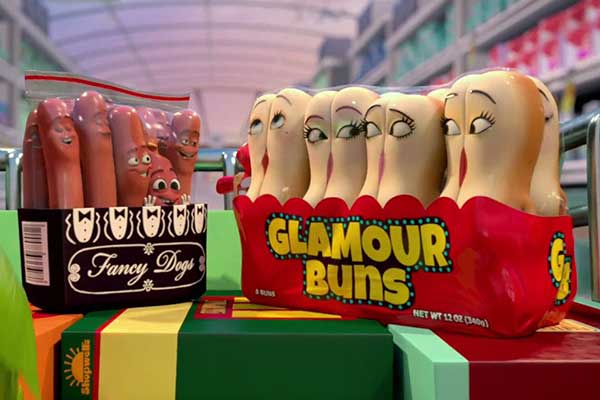 Frank (Seth Rogen) finds himself frustrated sitting on a shelf at Shopwells supermarket where he's cooped up in a shrink-wrapped package with seven other sausages. They pass their time speculating about what awaits them in "The Great Beyond," meaning the vast unknown just past the cash register on the other side of the door.

They're all very eager to be bought because of an unfounded belief in a rumor that the store's customers transport their groceries to a heaven-like utopia to enjoy lives of neverending bliss. And Frank has another reason he wants to leave, namely, a crush on Brenda (Kristen Wiig), the curviest of the girly Glamour Buns.

Then, when they're all about to be purchased during the blowout 4th of July sale, Frank learns from a returned jar of Honey Mustard (Danny McBride) that they've been operating under a mistaken assumption all along. Truth be told, food simply gets taken home and devoured eaten by the humans.

So, Frank sounds the alarm, warning, "The Gods are evil and they kill us!" Unfortunately, the news falls mostly on deaf ears, since the majority of his friends are simply way too brainwashed to catch on and resist.

However, he and a few intrepid souls do question their blind faith and make a break for it, including Brenda, Sammy Bagel, Jr. (Edward Norton), Teresa the Taco (Salma Hayek), Lavash the Pita bread (David Krumholtz), Grits (Craig Robinson), Twinkies (Scott Underwood) and fellow sausages Barry (Michael Cera), Carl (Jonah Hill) and Troy (Anders Holm). What ensues is a rollicking, raunchy exploration of religion, sex and political issues from the perspective of these anthropomorphized, foul-mouthed grocery items.

For example, Middle East concerns are reflected in the bitter badinage over aisle space between the bagel and the pita bread, a thinly-veiled reference to Jewish and Palestinian tensions. Race in America is touched upon when Grits complains about "Crackers" in a tirade during which he bellows "They call me Mr. Grits!"

Still, most of this expletive-laced adventure is dedicated to the sort of sexual innuendo designed to titillate testosterone-sodden males. Frank's explicit flirtations with Brenda are actually matched by lesbian Teresa's equally-tawdry appeals ("I have crotch feeling for you!").

Co-directed by Greg Tiernan and Conrad Vernon, Sausage Party is a hard to pigeonhole, adult-oriented cartoon. It's certainly a coarse and crude teensploitation flick which relentlessly earns its R-rating. Most reminiscent of a couple of other equally-outrageous animated adventures, namely Team America (2004) and South Park (1997), this is a take no prisoners comedy which will undoubtedly resonate with fans of such politically-incorrect shock-fare.