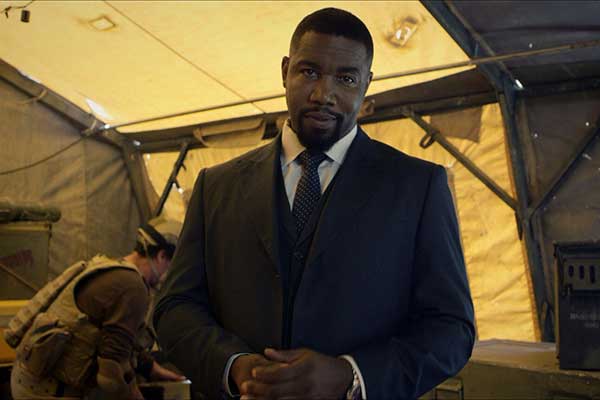 A highly trained martial artist and actor, Michael Jai White has broken barriers as a Hollywood star and international box office sensation. With his dynamic personality, agile abilities and physique of a bodybuilder, Michael has earned respect for his versatile talents both on and off screen.

Born November 10, 1967 in Brooklyn, New York, it was watching the film Five Fingers of Death that initiated Michael’s interest in the martial arts. At the tender age 7, he started taking weekly Japanese Jujitsu classes to stay focused while growing up on the tough streets of Brooklyn.

At 8, Michael’s family relocated to Bridgeport, Connecticut where he studied the Shotokan and Kyokushin forms of karate, earning his first black belt by 13. Upon graduating from Bridgeport’s Central High School, he went on to further his education, first attending Southern Connecticut and then UConn. While winning multiple championships as a national martial arts competitor, he became a Special Education teacher at Wilbur Cross Elementary School in Bridgeport.

Bitten by the acting bug, Michael began auditioning for commercials and acting gigs on weekends and during summer breaks while teaching. When he began landing jobs in commercials and guest-starring roles on television shows and films; he left teaching and moved to Los Angeles to pursue an acting career full-time.

Before long, he would go on to guest star on such hit television shows as Saved by the Bell, Martin, NYPD Blue, and CSI. Proving his acting ability, he would also be cast in the lead role of legendary boxer Mike Tyson in the HBO biopic, Tyson.

Michael was subsequently cast to play the title character in the movie Spawn which came with the distinction of being the first black superhero in a major motion picture. While he cemented his Hollywood status as a bonafide action star, more diverse roles emerged that allowed him to showcase his physical prowess as well as display his on-screen charisma and comedic ability in such films as Exit Wounds, Undisputed 2, Silver Hawk, Blood & Bone, Black Dynamite and Tyler Perry’s Why Did I Get Married and Why Did I Get Married Too playing opposite Tasha Smith. The two would ignite such on-screen chemistry, they would go on to star together in the long running OWN Network series, For Better or Worse.

Kam Williams: Hey Michael, thanks for another opportunity to speak with you.

KW: What interested you in this crazy action film, Vigilante Diaries?

MJW: I was one of the players invited to the party, and I had fun at it. Paul Sloan, the picture's scriptwriter and lead actor, invited me to join the project, as did Christian Sesma, who directed it. And it became a really fun romp.

KW: You certainly had an impressive and diverse cast, with actors ranging from veteran actor Michael Madsen to Jason Mewes from the Kevin Smith movies to action stars like like you and Danny Trejo of Machete. How were you all assembled?

MJW: Well, it started out as a web series, and then they turned it into a full-length feature film. .

KW: Tell me a little about the guy you play, Barrington?

MJW: He's sort of a rogue CIA Agent who's pulling strings all over the place, You can't tell if he's a good guy or a bad guy. I think that's indicative of all the characters. It's kind of a dark comedy. [Chuckles] The good thing about the movie is that you just can't tell where it's going to go.

KW: I won't spoil the ending of the film, but let me say I was definitely shocked by one of the surprising developments involving your character.

MJW: Yeah. It's one of those movies where you find yourself saying, "Wait a minute. Where are we now?" It's an action movie that's not trying to pretend to be anything other than that.

KW: Does the movie have a message, or should people just sit back and enjoy the action?

MJW: I'd say just sit back and enjoy the action, and also the laughs, because there's a lot of funny stuff in the movie as well. 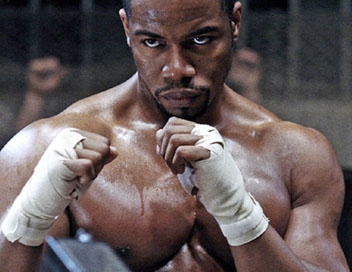 Michael Jai White plays a plays an ex-con who takes the underground fighting world by storm in his quest to fulfill a promise to a dead friend in "Blood and Bone"MJW: Wow! There are probably several of them. I made my attempt to redo Hard Times [the Charles Bronson classic from 1975]. I called it Blood and Bone. And there are certain other classic films I'd love to see again, but under a different name.

MJW: Well, the first movie I ever saw was Five Fingers of Death, which was really the first kung fu movie sent to the United States. It freaked me out because people were pulling out adversaries' eyeballs. I ran out of the theater, and my brothers and cousins had to come get me. So, it's amazing that I would study martial arts years later, because that certainly freaked me out at first. .

KW: What type of dietary regimen do you follow to stay in such good shape?

MJW: I basically eat fish and vegetables, pretty much the pescatarian route.

MJW: A constant work in progress.

MJW: At 16, I traveled across the country by Greyhound bus.

MJW: Fairness. I just wish there was fairness overall. And you know what? I also wish for honesty.

MJW: Boy, these are great questions. I'm a former Special Ed teacher, and I plan to do more in the country's public schools system. I definitely intend to help with policies in the inner-city school system. That's something I haven't done yet., but I'm going to.

KW: Thanks again for the time, Michael, and best of luck with the film.