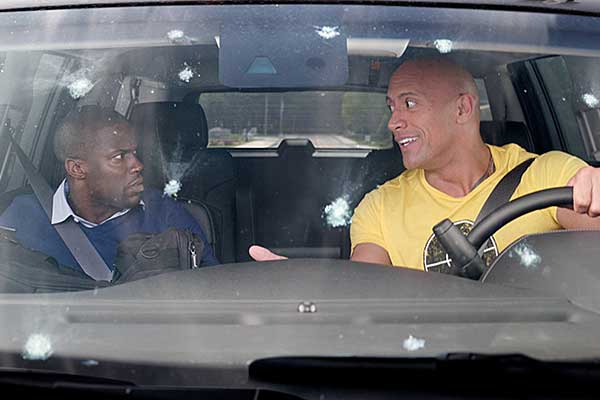 Back in high school, Calvin (Kevin Hart) was voted "Most Likely to Succeed" while his chubby pal Bob (Dwayne Johnson) was being bullied by classmates because of his weight.. But that was a couple of decades ago, and a lot has changed since then.

Today, we find Calvin wondering whether he might have peaked during his glory days at Central High when he and his childhood sweetheart Maggie (Danielle Nicolet) were voted Homecoming King and Queen. Yes, the two did marry, but the relationship's been so rocky she's currently insisting they enter therapy. Things are even worse for Calvin at his accounting firm, where he's just been passed over for a promotion to partner.

By comparison, Bob's fortunes have improved immeasurably over the intervening years. He's not only shed all that unwanted baby fat but he's re-sculpted himself into a veritable Adonis by pumping iron a half-dozen hours a day. Furthermore, he's flourishing in an enviable career as a crack CIA Agent well-versed in the tools of international espionage.

The pair's paths cross for the first time in years at their 20th high school reunion where Calvin is impressed by both Bob's new physique and his daring line of work. So, it's no surprise that the suave spy is able to enlist the jaded pencil pusher's technical assistance on his latest assignment. He also could use a little help apprehending the assassin who murdered his partner (Aaron Paul).

That's the point of departure of Central Intelligence, an unlikely-buddies comedy directed by Rawson Marshall Thurber (We're the Millers). Kevin Hart has proven himself quite the master of the genre, given the success of such box-office hits as The Wedding Ringer, Get Hard and Ride Along 1 and 2, to name a few. Unfortunately, Kevin and co-star Dwayne Johnson fail to generate any chemistry, despite sharing the screen in scene after scene of silly slapstick.

The bulk of the picture's pathetic attempts at humor revolve around contrasting buff Bob's bravery with weak-kneed Calvin's cowardice. But sadly, the laughs are few and far between during this decidedly-underwhelming action-adventure.

Too bad whoever directed the promising trailer probably didn't direct the movie.