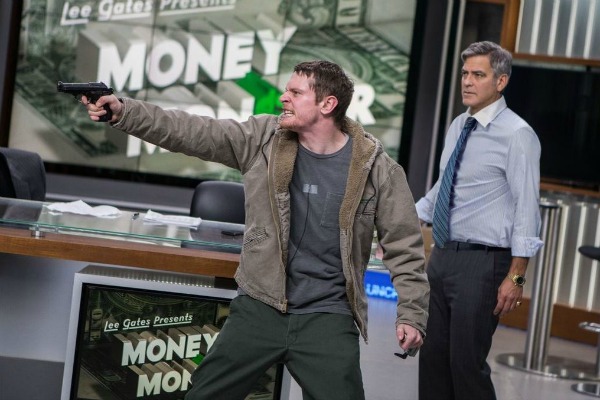 Kyle Budwell (Jack O'Connell) was a working-class guy from Queens who never had enough cash in the bank to play the market until his mother died and left him $60,000. Against his better judgment, the rough-edged truck driver put every penny of that inheritance into Ibis Clear Capital, a security being promoted by TV money guru Lee Gates as "safer than a savings account."

Gates is the glib host of Money Monster, an investment advice show on the mythical FNN Network. The clownish character played by George Clooney was obviously inspired by bombastic Jim Cramer of CNBC's Mad Money.

Anyhow, in less than a month, Gates' "stock pick of the millennium" goes bust, leaving Kyle frustrated, broke and at the end of his rope. Next thing you know, he shows up at the television station with a gun looking for answers.

He crashes the set of Money Monster during a live airing, and proceeds to place a vest filled with explosives on Lee. Producer Patty Fenn (Julia Roberts) gives in to Kyle's demand that the show continue to broadcast.

Finger on the trigger, he proceeds to grill Lee about the stock collapse while ranting and raving about how "The system is rigged!" Kyle's sure that Gates must have been aware that the stock was going to tank, and he demands that all of the Ibis shareholders be reimbursed their $800 million in losses.

Meanwhile, the police descend on the set, led by patient Captain Powell (Giancarlo Esposito) who summons a hostage negotiator. During the ensuing standoff, the truth about Ibis slowly emerges in front of millions of viewers, and the company's CEO, Walt Camby (Dominic West), becomes implicated in a shady manipulation of his stock.

So unfolds Money Monster, a high-octane thriller directed by Jodie Foster. This movie is also a modern morality play which levels some serious accusations at Wall Street. Credit goes to George Clooney and Julia Roberts for committing fully to a production resting on a farfetched premise that could've very easily proved unconvincing in less talented hands.