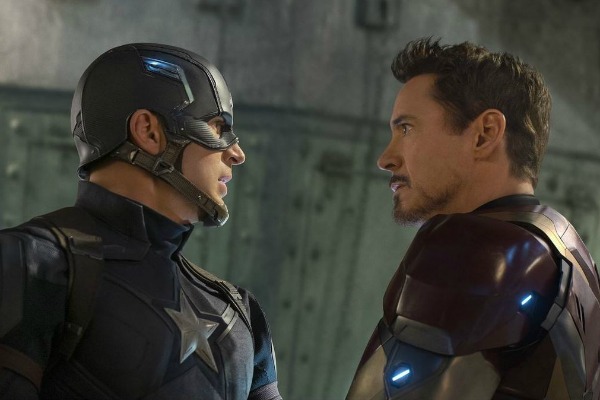 After overkill during an Avengers mission gone horribly wrong in Lagos, Nigeria exacts a terrible toll in terms of collateral damage, the U.S. Secretary of State (William Hurt) calls the team of superheroes on the carpet. He proceeds to chew them out for behaving like vigilantes with unchecked power, before suggesting they agree to be supervised in the future by a United Nations panel.

While a remorseful Iron Man (Robert Downey, Jr.) is willing to submit to the Anti-Hero Registration Act, Captain America (Chris Evans) is much more suspicious of these Sokovia Accords ratified by 117 nations. Next thing you know, the Avengers have split into factions over whether or not they should abide by the governmental regulation.

What ensues is a visually-captivating battle royal in which the allies-turned-adversaries inexplicably fight each other rather than resolve their ethical differences civilly. What does that tell you about whether they might need to be reigned in?

Fans of the franchise are certain to delight in seeing so many of their favorite superheroes together in the same episode. Regrettably, that is both the primary strength and weakness of this 13th installment in the Marvel Cinematic Universe series. For, co-directors Anthony and Joe Russo (Captain America: Winter Soldier) have cluttered the screen by introducing and then failing to develop over a score of prominent characters, unless engaging in combat counts.

Too bad they couldn't come up with anything more interesting for the shattered, Agents of S.H.I.E.L.D. confederacy to do besides battling each other. Clocking in at 2 and 1/2 hours, even the eye-popping special f/x-tend to gets a little tedious once the wow factor wears off.

An underwhelming exercise in sound and fury strictly for brains on pause.