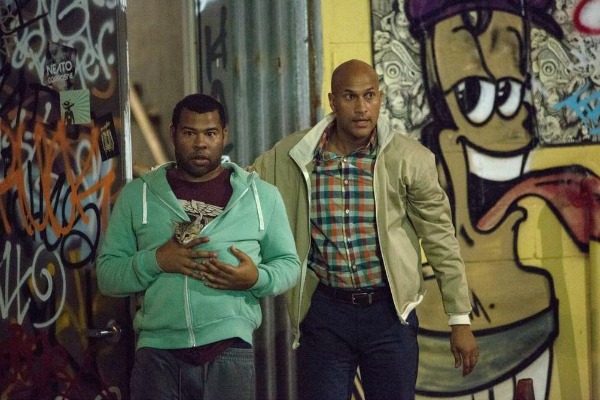 Rell (Jordan Peele) was so inconsolable after being dumped by his girlfriend that getting high didn't help ease the pain. But then, while crying on the shoulder of his cousin Clarence (Keegan-Michael Key), a cute, little kitten appeared on his doorstep.

Seeing this as a sign of divine intervention, Rell adopted the adorable stray, which he proceeded to feed, bathe and name Keanu, Hawaiian for "cool breeze." But after bonding for the next couple of weeks, his newfound state of bliss ended abruptly with the kidnapping of Keanu during a break in by members of the 17th Street Blips.

The Blips are a ruthless drug gang from the wrong side of the proverbial tracks. So, Rell realizes that to rescue his pet he's going to have to venture into the heart of the ghetto.

This is a tall order for a nerd from the burbs totally unfamiliar with the ways of the 'hood. for some reason, he enlists the assistance of his equally-geeky cousin, whose wife (Nia Long) and daughter (Jordyn A. Davis) very conveniently just happen to be going away for the weekend.

Of course, retrieving Keanu proves to be quite complicated, as not only Cheddar but a Latino crime boss (Luis Guzman) has staked a claim to the cat (which he refers to as Iglesias). And it is very important that the cousins never admit their middle-class roots lest they risk being exposed as lacking street cred.

Thus unfolds Keanu, a one-trick pony or, should I say, a one-trick kitty directed by Peter Atencio, director of 54 episodes of the Key and Peel TV show. This fish-out-of-water comedy repeatedly relies on the theme that these guys have no idea how to survive in the slums on the run from myriad maladroit morons. That running joke gets tired after about 10 minutes, but the stretch-o-matic skit format insists on beating the dead horse for another hour and a half.