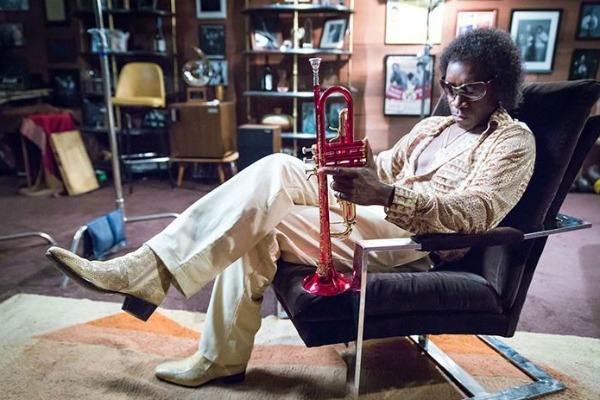 It's no secret that Don Cheadle wanted to make a movie about Miles Davis (1926-1991) for over a decade. Well, the wait is finally over for jazz fans eager to see the warts-and-all biopic chronicling some of the highs and lows of the legendary trumpeter's checkered career.

Cheadle not only produced, directed, and co-wrote his labor of love, but handles the title character in a haunting performance where he manages to channel the spirit of Miles oh so convincingly, from the gravelly voice to the mercurial temperament.

But while the impersonation might be spot on, the surreal screenplay leaves a lot to be desired. The script eschews a conventional, chronological approach to storytelling in favor of a free form structure featuring a series of vignettes focusing less on the man's music than his messy private life.

The picture's point of departure is 1975, when we find Miles in the midst of a self-imposed, five-year break from the music business. He spends his days barricaded in his New York apartment consuming copious amounts of drugs to mask the pain caused by a chronic hip condition.

The plot thickens with the intrusion into this fortress of solitude of a pushy Rolling Stone reporter (Ewan McGregor) in search of a scoop about a rumored comeback. Dave Braden proceeds to circumvent a very skeptical Davis' disdain for journalists by agreeing to serve as his chauffeur and to procure cocaine on his behalf. Unfortunately, Dave also has a hidden agenda, namely, gaining possession of the master tape of Miles' next album, if it exists.

Meanwhile, the icon is conveniently given to reminiscing about his past, which allows for intermittent flashbacks, most about his tempestuous relationship with his first wife, Frances (Emayatzy Corinealdi). Too bad Miles' impressive body of work is given short shrift. except for the handful of classics on the soundtrack.

An improvisational cinematic portrait of a jazz giant whose prodigious cultural contributions play second fiddle to a plethora of his personal failings.