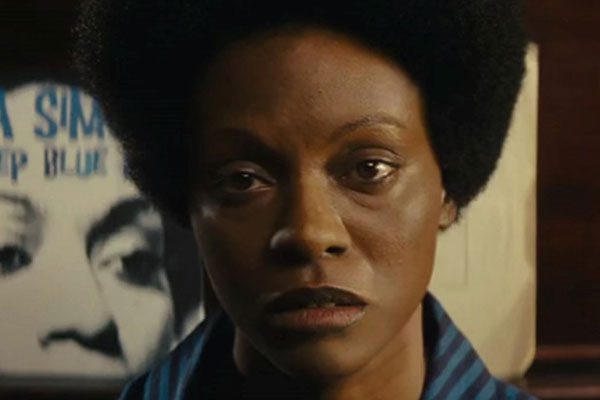 Most of the pre-release buzz surrounding “Nina” has swirled around the debate about Zoe Saldana's darkening her skin, donning an Afro wig and wearing a prosthetic nose to portray Nina Simone (1933-2003). Apparently, in these politically-correct times, some consider the casting of Saldana as the dark-skinned title character to be a case of cultural appropriation, since she is of Dominican and Puerto Rican extraction and thus, by implication, not black enough to play an African-American.

The beleaguered actress was so beat up in the press that she's even publicly acknowledged the issue, admitting "I didn't think I was right for the part." However, I suspect anyone who actually sees the film would find Zoe's Africanized features to be less of a distraction than her singing.

For, while she certainly manages to hold her own, Nina's fans will undoubtedly be more disappointed by the absence of the haunting strains of The High Priestess of Soul's distinctive voice than by her impersonator's performing in blackface. Again and again, it's frustrating to have to settle for second-rate renditions of such Simone classics as "My Baby Just Cares for Me," "Feeling Good," "Black Is the Colour," "To Be Young, Gifted and Black," "I Put a Spell on You," and "Why? (The King of Love Is Dead)."

Thankfully, Zoe does a better job in the acting half of the role, convincingly capturing Nina's mercurial personality, from the imperious air, to the violent mood swings, to the substance abuse, to the bouts of depression and self-doubt. The movie marks the writing and directorial debut of Cynthia Mort who reportedly distanced herself from her own production, at one point suing over the final cut because she had lost creative control over the editing.

The story unfolds in North Carolina in 1946 with an adolescent Nina exhibiting promise as a classical pianist. From there, the film fast forwards to New York in 1965 where we learn that the once-promising prodigy has been reduced to playing jazz in nightclubs after having dropped out of Juilliard.

The narrative quickly shifts to L.A. in 1995, where we find her already on the downside of an illustrious career. She's just been committed to a mental hospital after being diagnosed as an alcoholic, paranoid, manic depressive.

As luck would have it, Nina was assigned an empathetic nurse (David Oyelowo) who would take a special interest in her welfare. Not only did Clifton Henderson help her escape the facility but he quit his job to accompany her to France where he would serve as her personal assistant.

It is that relationship which would endure until the end of Nina's life that is the focus of this warts-and-all biopic. Clifton spends as much time simply cleaning up the verbally-abusive, chain-smoking, substance-abusing fading star's act, as he does trying to find her gigs, given her well-earned reputation as a difficult diva.

Ignore all the blackface haters, singing aside, Zoe Saldana delivers a decent enough Nina Simone impersonation here to make you wonder what all the brouhaha was ever about.