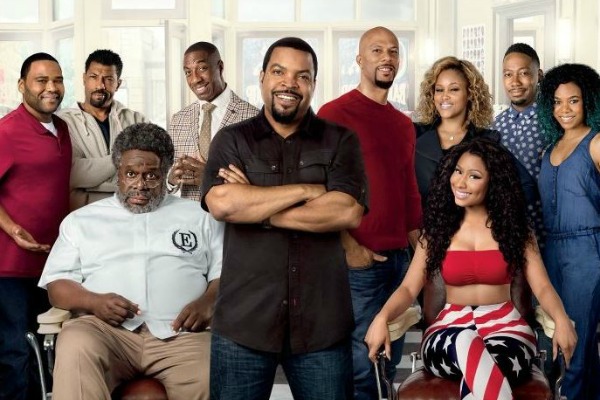 There's been a big change at Calvin's Barbershop since our last visit over a decade ago. The once-sacred male sanctuary has been converted to a unisex salon, and some feisty female employees have brought a new flava to the former man cave, including manager Angie (Regina Hall), flamboyant Draya (Nicki Minaj) and cynical Bree (Margot Bingham).

Besides Ice Cube as Calvin, among the regulars reprising their roles are Jazmin Lewis as his wife, Eve as Terri, Cedric the Entertainer as Eddie, Anthony Anderson as J.D., Sean Patrick Harris as Jimmy, and Troy Garrity as Isaac. The cast also boasts a number of newcomers, most notably, scene-stealing J.B. Smoove as motor-mouthed One-Stop, Deon Cole as Dante, and Common whose character, Rashad, is married to Eve.

As the film unfolds, we're treated to a montage of file footage featuring Reverend Al Sharpton and Father Pfleger, as well as news stories about the uptick in drive-by shootings on the South Side of Chicago. The situation has left Calvin in a quandary about whether it might be wise to relocate the establishment to a safer section of the city.

More importantly, he's worried about the safety of his adolescent son, Jalen (Michael Rainey, Jr.), despite the fact the boy is enrolled at Holy Cross Catholic School. For, on his way home, the kid has to negotiate his way through a gauntlet of gangstas pressuring him to join their ranks.

Meanwhile, street violence seems to claim another young person's life on a daily basis, with some of it hitting a little too close to home. This inspires Calvin to host a peace summit in a desperate attempt to negotiate a ceasefire between the bitter rivals, the Vice Lords and the G.D.s.

Besides addressing the escalating murder rate, the picture does devote plenty of scenes to its trademark levity. One moment, we're treated to an old-fashioned battle-of-the-sexes. The next, there's a debate over President Obama's commitment to the black community. And the most comic relief comes courtesy of trash-talking One-Stop, who has an endless supply of market items for sale: nickel bags of weed to baby pit bulls to watermelon-flavored fried chicken.

Directed by Malcolm Lee (The Best Man), Barbershop: The Next Cut proves to be a pleasant surprise in that it tones down the campy comedy in favor of a serious social agenda. Easily the best installment in the beloved franchise, a movie which manages to entertain while delivering a sobering message that's long overdue.