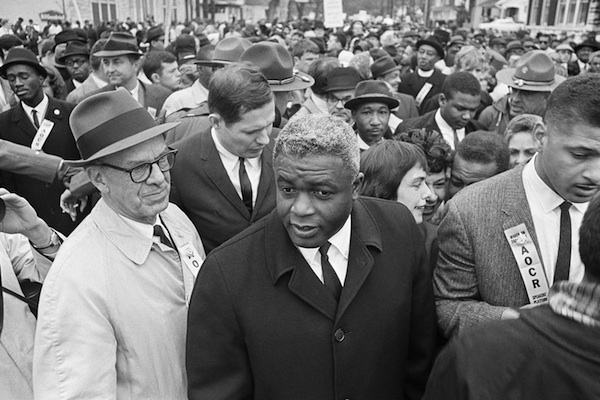 NEW YORK (AP) — PBS' documentary on the life of Jackie Robinson gets most interesting when the gloves and bats are put away for good.

The two-part film directed by Ken Burns, Sarah Burns and David McMahon airs Monday and Tuesday at 9 p.m. EDT on most PBS stations.

The first part details Robinson's early life and his baseball career, when he became the first black player in Major League Baseball in 1947. The second part is more complex, showing Robinson navigating a civil rights era that he helped put in motion.

Burns' team was nudged into making "Jackie Robinson" by Jackie's 93-year-old widow Rachel. They had gotten to know each other when Burns made his documentary series on baseball, which aired in 1994. She wanted Burns to make a film solely on Robinson but he didn't have time, and two attempts with other directors didn't work out.

Finally, Burns, his daughter and son-in-law found time, although he gently reminded her that "you can't fire me."

"You can tell in the moments that she's on (screen) that she wants you to understand how complicated this was, that it wasn't just this simple mythology that we have," he said.

The film illustrates how pressure had been building to integrate baseball, particularly after blacks served with distinction in World War II. Robinson was urged to turn the other cheek when he endured taunts and insults, and this took effort — it wasn't in Robinson's nature.

They cast doubt on a moment that has been immortalized with a statue in Brooklyn. Early in Robinson's rookie year, teammate Pee Wee Reese supposedly put his arm around Robinson to signal acceptance by a white player who grew up in Kentucky.

But there are real questions about whether this happened at all. It would have required Reese, a shortstop, to cross the field to Robinson, who played first base. There was no mention of it in newspaper accounts of the game in Cincinnati when it supposedly took place. Rachel Robinson had urged a different statue depicting the two players shaking hands. Robinson himself indicated in an autobiography that something like it had happened — but a year later, when he played second base.

Burns also detailed the supposed embrace in his 1994 documentary series.

"It's white people wanting to have skin in this game," Burns said. "We want to feel that we were good enough and forward-thinking enough. It's a good story, but it's mythology."

After being traded to the New York Giants in 1957, Robinson retired rather than play for the Dodgers' hated rivals. He became an executive at Chock Full 'O Nuts, and active in civil rights.

His post-baseball public life was complicated. As the film states at the opening of the second night, "Americans would see the real Jackie Robinson, and they would not always like him."

Robinson was a Republican, a member of the party of Lincoln, and supported Richard Nixon in the 1960 election against John F. Kennedy. During the campaign, he urged Nixon to reach out to the Rev. Martin Luther King Jr. when the minister was jailed. Nixon didn't, but Kennedy did, and narrowly won the election with newfound black support.

After Democrat Lyndon B. Johnson signed civil rights legislation, Robinson supported him in 1964 and urged other blacks to do the same. He was essentially there at the birth of the Republicans' strategy of appealing to Southern whites, and Nixon snubbed him after he was elected president in 1968.

Although he pushed for civil rights progress and held fundraisers at his Connecticut home, Robinson worked for a Republican in New York Gov. Nelson Rockefeller. He clashed with Malcolm X and more militant black activists. Twenty years after he broke baseball's color barrier, some blacks called him an "Uncle Tom."

All along, the Robinsons dealt with the difficulties of being parents in the 1960s. Jackie Robinson Jr. returned from Vietnam with a drug addiction that he struggled for years to beat, and just as it seemed he had, he died in a car accident.

Robinson threw out the first pitch at the 1972 World Series, and spoke out on the need for baseball to hire a black manager. He died of a heart attack shortly thereafter at age 53.

The end of the film — and the end of Robinson's life — is filled with pessimism. He realizes that he never had it made, that despite the progress he embodied, he was still a black man in a white man's world, Burns said.

The filmmaker said he gets criticism, even hate mail, for talking about race frequently in his projects, but said it's an important, ongoing part of the American story. He's eager to make a documentary on President Barack Obama, who is interviewed for "Jackie Robinson," but figures that needs 15 or 20 years of perspective.