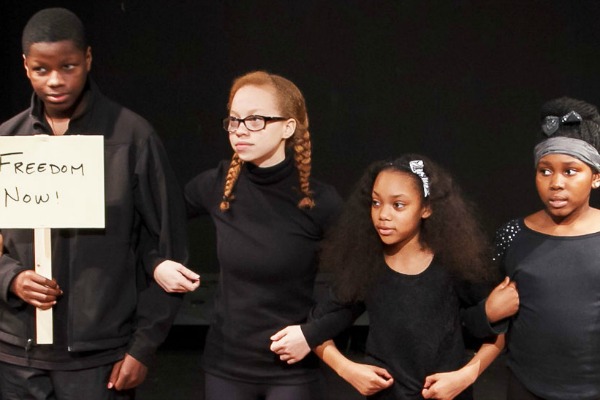 Almost 15 years ago, when she was just at teenager, Cecile Evans was teaching CaShawn Hopkins, who was in her 20s, how to be a theater stage manager for PassinArt, the longest running Black theater company in Oregon.

Evans has been learning theater management skills since she was 12 and got her first management job at 16 because of her PassinArt experience.
“PassinArt has been a constant in my life,” said Evans, now age 30. Her mother, Shelley Matthews, has been a PassinArt actress for over 20 years. “I know it kept me in a place where I’ve been able to grow.”

The mission of PassinArt, which was founded in 1984, is to entertain, educate and inspire artists and audiences while addressing critical issues facing the Black community. The organization’s goal is to present quality yet affordable theatrical productions, staged readings, and educational workshops for African Americans and multi-racial youth and community members in the Portland Metropolitan area.

“’Smoldering Fires,' which opened March 11 and runs through April 10, with productions at 7:30 p.m. Fridays and Saturdays and at 3 p.m. Sundays, honors the young civil rights advocates of yesterday, while sending the message that no matter your age you can take a stand and make a difference in your community today,” said PassinArt’s Co-Founder Constance Carley.

The currents of PassinArt’s training and influence ripple through several generations of Black families in Portland. A few years after Hopkins’ first theater training, she brought her infant son, Ajani Hopkins, into the Interstate Firehouse Culture Center, where PassinArt has historically staged many of its theater productions. She often strapped him into his infant seat, where he slept as she studied the light cues on the board at the back of the theater.

“I love PassinArt,” Hopkins said. “It’s always been family to me.”

Now, she is the stage manager for “Smoldering Fires,” the latest PassinArt play, which opened March 11. Evans is the top light technician; and her mother, Matthews, has one of the few adult roles in the play. In addition, Hopkins’ son, Ajani, now age 11, has one of the two lead roles, along with Eric Harris Jr., who plays his best friend. It is the first time both boys have starred in a community theater production.

“I didn’t know he had all that in him,” said Hopkins, whose 7-year-old daughter, Amin’a, also has a small part in the play. “It’s awesome to watch.”

Mary Yacob, whose 17-year-old daughter, Sami Yacob-Andrus, is also in “Smoldering Fires,” said this play is the first time her daughter has participated in a production that includes more than one or two black actors, though Sami has acted in short films, commercials and other children’s theater productions. Yacob said she discovered the “Smoldering Fires” call on the Facebook page of the Regional Arts & Cultural Center, which is one of the financial sponsors of the play, along with the MRG Foundation.

“I had not up to this point really seen any castings for a black theater company,” Yacob noted. “I didn’t think there were any in the area.”
“A lot of plays in Portland don’t accept kids,” she added. They’re geared for 18 and older.”

As “Smoldering Fires” addresses the role of children in the 1960s protests for racial equality, so many of the children who are in the play are in their first theater roles. Nine-year-old Timaya Hepburn was cast in the play when she came to an auditions to support two of her friends.

“I was the one who got one of the parts and neither of them got a part,” said Timaya, who is usually more interested in gymnastics and basketball. “I went to a couple plays before and I saw how you react to some stuff and speak up and project, but I’ve never done any theater before.”

Sami says she is enjoying being on stage. She’s been rehearsing after school almost every day of the week, except for Mondays.

“It’s been progressing pretty well,” Sami said. “The younger kids are a little rambunctious. But, I think we’ll be ready for opening.”

Charelle Twitty, age 39, was in her first PassinArt play when she was age 15. She recently ran into the costumer for “Smoldering Fires” at a community event and was invited to an audition.

‘I was scared,” Twitty said. “I haven’t been on stage in over 15 years. I’m excited and blessed.”

Her 12-year-old daughter, Destini, also received a role in the play.

“My daughter said ‘I don’t know mom, I don’t want to steal the spotlight from you.’ “ Twitty said, laughing. “I said: ‘It’s OK, the spotlight is big enough for all of us.’”

Destini, a 6th grader, said she was both excited and nervous about being on stage.

“I’ve never been in a play before,” she says. “But it’s helping me get out of my shell a little more.”

In an era where thousands of Black families have been pushed out of their traditional inner Northeast Portland neighborhood due to gentrification, Evans credits PassinArt as a stabilizing force that offers a strong cultural connection, while training the next generation of stage actors, backstage technicians and theater lovers.

“I think it’s really exciting that PassinArt has been able to develop a culture where both parents and children can be together and accomplish the same goal,” Evans said. “That’s rare these days to have something that you’ve known has been a fixture in your life for the past 20 years. That’s a powerhouse in the black community.”