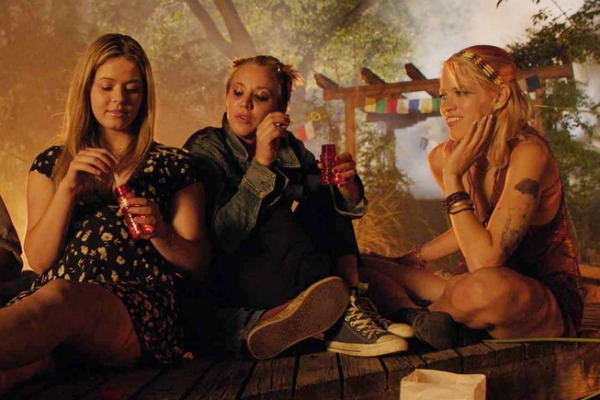 Bodhi was a popular guy back in high school several years ago. So, when he passed away unexpectedly from an aneurysm, it's no surprise that many of his friends might decide to return home to attend the funeral.

Among the pals descending on Albuquerque for the services is Miguel (Eli Vargas) who picks up a pregnant hitchhiker (Sasha Pieterse) en route from Chicago. Another is Miguel's roommate, Dylan (Landon Liboiron) whose mom (Virginia Madsen) hasn't seen her son since he went away to college.

Then there's Ember (Cody Horn), a promiscuous bimbo who admits to sleeping with Bodhi despite identifying herself as a lesbian. And Katy (Kaley Cuoco), who has a child being raised by her grandmother, is out on probation after spending time behind bars for drug possession and for leading police on a high-speed car chase.

This motley crew of mourners and a few others reunite to reminisce, imbibe and asses the state of their lives in Burning Bodhi, an alternately whimsical and sobering meditation on mortality. The movie marks the outstanding writing and directorial debut of Matthew McDuffie who exhibits quite a knack for capturing the attitudes and angst of today's twenty-somethings.

His pithy dialogue is laced with lots of memorable lines like, "May the light at the end of the tunnel is just you coming out of another vagina." Executing the flip script is a very talented ensemble led by The Big Bang Theory's Kaley Cuoco who exhibits an impressive acting range in a role far afield from the person (Penny) she plays on that popular sitcom.

The plot thickens when Dylan's jealous girlfriend Lauren (Meghann Fahey) shows up in time to put the kibosh on any rekindling of romance between him and his ex, Katy. Meanwhile, Ember can hardly contain her crush on Katy, who was dumped by Dylan for sleeping with dearly departed Bodhi right after he left for the Windy City. And so forth.

To summarize in 25 words or less, this compelling, character-driven soap opera examines the incestuous coupling, uncoupling, re-coupling, revelations and regrets among a wacky clique of world-weary ex-classmates. A trendy, Millennial Generation variation on The Big Chill which gives that beloved classic a real run for its money.