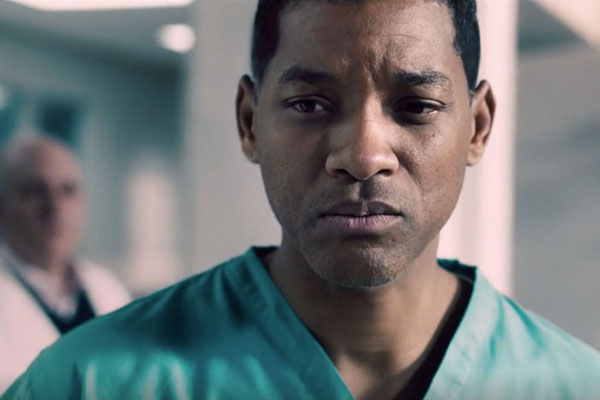 In 2002, Will Smith landed his first Academy Award nomination for Ali, a riveting biopic about Muhammad Ali directed by Michael Mann. Although a cultural icon in his own right, Smith managed to disappear into the role in the process of delivering a brilliant performance as "The Greatest" boxer of all time.

Despite his being able to "Float like a butterfly and sting like a bee!" the sport eventually exacted a devastating toll on the champ. For Ali would become afflicted with a host of neurological disorders as a consequence of taking so many hits to the head.

While fans call it being "punch drunk," the clinical term for the condition is Chronic Traumatic Encephalopathy (CTE). What's ironic is that Will Smith is on the verge of landing another Oscar nomination for Concussion, a picture in which he plays Dr. Bennet Omalu, the Nigeria-born physician whose discovered the link between football and brain damage while working as a forensic pathologist in Pennsylvania.

He first recognized something was amiss while performing an autopsy on the Pittsburgh Steelers' former center Mike Webster (David Morse), who died at 50 from a combination of amnesia, depression and dementia. Dr. Omalu was shocked to observe that the Hall of Famer had the brain of a very old man, so he decided to posthumously examine those of other National Football League vets who also passed away prematurely.

Lo and behold, the research revealed they all had suffered from CTE, ostensibly as a result of the pounding their skulls had taken on the field. Unfortunately, when Omalu subsequently attempted to go public with the his findings, he was threatened and discredited by the army of lawyers and quacks hired by Commissioner Roger Goodell (Luke Wilson) to protect the NFL's image.

Thus unfolds Concussion, a David vs. Goliath saga reminiscent of The Insider (1999), the similarly-themed expose recounting the real-life ordeal of the intrepid whistleblower who took on the Tobacco Industry when it was still hell bent on denying any link between smoking and cancer. An interesting factoid which bears mentioning is that The Insider was directed by the aforementioned Michael Mann.

Concussion, however, was directed by Peter Landesman (Parkland). He adapted it to the screen with the help of investigative journalist Jeanne Marie Laksas from "Game Brain," an article she published about the cover-up in the October 2009 issue of GQ magazine.

But make no mistake, Concussion is a marvelous Will Smith vehicle, one that he'll undoubtedly get to drive for the duration of awards season, possibility all the way to the Oscars on Feb. 28.