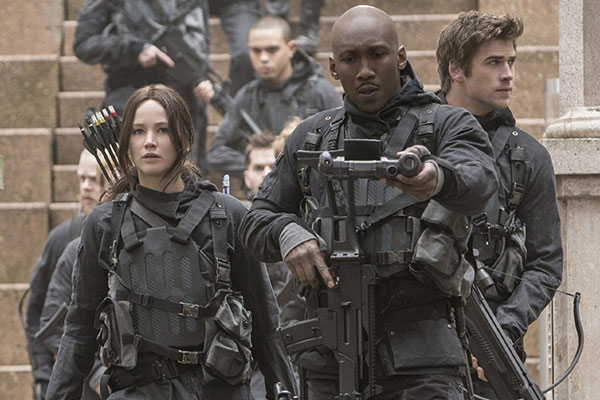 Carol (R sexuality, nudity and brief profanity) Cate Blanchett plays the title character in this romance drama, set in New York City in the Fifties, as a woman in the midst of a bitter divorce who becomes smitten with a department store clerk (Rooney Mara) she meets while buying a Christmas present for her daughter (Kk Heim). With Sarah Paulson, Kyle Chandler and Jake Lacy.

Democrats (Unrated) Power corrupts documentary chronicling Zimbabwe strongman Robert Mugabe's going through the charade of staging a presidential election in a futile attempt to fool the world into believing the country's a legitimate democracy.

Frame by Frame (Unrated) Free press documentary chronicling the efforts of four Afghan photojournalists to ply their trade following the fall of the Taliban who had made taking pictures a crime. (In Dari and English with subtitles)

Kingdom of Shadows (PG-13 for mature themes and disturbing images) Rio Grande documentary taking an unflinching look at the ever-escalating body count in the drug wars being waged along the U.S.-Mexico border. (In Spanish and English with subtitles)

Mediterranea (Unrated) Fact-based docudrama recounting the ordeal of a couple of refugees (Koudous Seihon and Alassane Sy) who make the perilous journey from Africa to Italy in search of a better life only to be met with hostility and violence. With Paolo Sciarretta, Annalisa Pagano and Pio Amato. (In French, Italian, English and Arabic with subtitles)

Mustang (PG-13 for mature themes and sexuality) Tale of female empowerment, set in Turkey, about five, freedom-loving sisters grounded by their parents after engaging in innocent horesplay with boys on their way home from school. Co-starring Gunes Sensoy, Elit Iscan, Doga Zeynep Doguslu, Tugba Sunguroglu and Ilayda Akdogan. (In Turkish with subtitles)

Secret in Their Eyes (PG-13 for profanity, sexual references, mature themes and disturbing violence) Whodunit revolving around a tight-knit FBI unit, investigating a string of murders of teenage girls, that is suddenly torn asunder by the brutal slaying of a team member's (Julia Roberts) daughter (Zoe Graham). With Chiwetel Ejiofor, Nicole Kidman and Lyndon Smith.

The Summer of Sangaile (Unrated) Julija Steponaityte handles the title role in this coming-of-age tale of teen love as a shy and retiring wallflower who falls head over heels for a daredevil (Aiste Dirziute) she meets at an airplane stunt show. Featuring Nele Savicenko, Laurynas Jurgelis and Jurate Sodyte. (In Lithuanian with subtitles)

Very Semi-Serious (Unrated) Jocular documentary highlighting the process by which the New Yorker magazine's cartoon editor Bob Mankoff settles on which submissions to include in each issue.