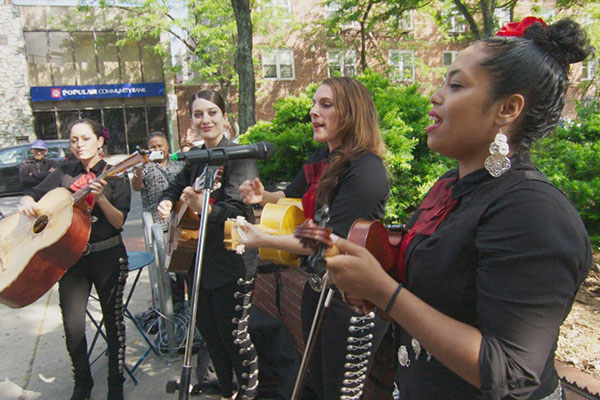 Brooklyn (PG-13 for a sex scene and brief profanity) Romance drama, set in the Fifties, revolving around a homesick immigrant to the U.S. (Saoirse Ronan) who finds herself torn between a suitor (Emory Cohen) she meets in New York and another (Domnhall Gleason) she left behind in Ireland. With Julie Walters, Jim Broadbent and Michael Zegen.

Barista (Unrated) Coffee documentary chronicling the competition among entrants in the National Barista Championship to brew the best cup of java.

In Jackson Heights (Unrated) Melting pot documentary about an ethnically-diverse neighborhood in Queens, New York where 167 languages are spoken. (In English, Spanish, Arabic and Hindi with subtitles)

Miss You Already (PG-13 for sexuality, profanity and mature themes) Bittersweet dramedy about a couple of lifelong BFFS whose relationship becomes strained when one (Drew Barrymore) starts a family around the same time that the other (Toni Collette) is diagnosed with breast cancer. With Dominic Cooper, Paddy Considine and Tyson Ritter.

My Nazi Legacy (Unrated) Truth and reconciliation documentary about a descendant of Holocaust survivors' visit to concentration camps in the company of two sons of Nazi war criminals.

Palio (Unrated) Sport of kings documentary about the oldest horse race in the world which is staged twice a year in the city of Siena. (In Italian with subtitles)

Peggy Guggenheim: Art Addict (Unrated) Prestige biopic about an iconoclastic socialite with impeccable taste who amassed one of the most impressive collections of 20th Century art.

Theeb (Unrated) Jacir Eid Al-Hwietat plays the title character in this coming-of-age saga about a young Bedouin boy who escorts a mysterious British officer on a secret mission (Jack Fox) across the Arabian desert during World War I. Featuring Hussein Salameh Al-Sweilhiyeen and Hassan Mutlag Al-Maraiyeh. (In Arabic with subtitles)

Trumbo (R for profanity and sexual references) Historical drama, set in the late Forties, recounting the blacklisting of Hollywood screenwriter Dalton Trumbo (Bryan Cranston) and some colleagues after being branded as Communists because of their progressive political views. With Diane Lane, Elle Fanning, John Goodman and Helen Mirren.