'Sista in the Brotherhood' Film Shows the Black Tradeswoman Experience 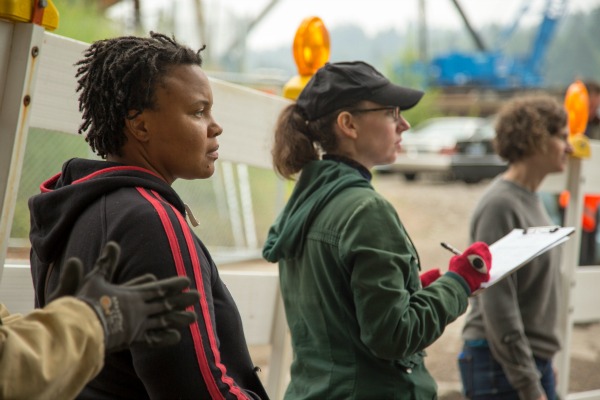 The first day on the job is often a stressful experience. Working in a new environment, with new co-workers and managers, the “new hire” is an outsider.

For some Black women in the construction trades, that “outsider” label never fades. Only 1 percent of construction workers are women of color. Despite the good pay, many feel pushed out due to racism and sexism in the work environment.

This experience is detailed in the short film “Sista in the Brotherhood,” produced by Roberta Hunte, Ph.D., and Dawn Jones Redstone. The film will premiere to a sold out crowd at the Clinton Street Theater on Oct. 20.

Hunte said the role of women in construction is often overlooked and their contributions dismissed.

“What's important to recognize is that women do do this work, and women of color are also part of this story,” Hunte said.

The film follows Laneice, a young Black apprentice carpenter who has arrived on her first day of work. Her new job site is less than welcoming, and she spends her day trying to prove herself to her coworkers.

Both Hunte and Redstone have a practical understanding of this tradeswoman experience. Hunte worked with the non-profit Oregon Tradeswomen helping women get into the woman’s pre-apprenticeship program. Redstone was a journey-level carpenter before teaching at Oregon Tradeswomen.

Laneice’s experiences in the film are drawn from Hunte’s doctoral research. She interviewed 15 Black women throughout the country about their lives in the trades. Often the women would talk about experiences of racism and sexism in many forms. Hunte said the women endured jokes, slurs, hostility and felt invalidated.

“It still remains a real White male-dominated industry, particularly for the higher paying jobs. You see people of color concentrated in the lesser paid and lower skilled more aspects of the trades,” Hunte said.

The lack of family-friendly labor policies are another challenge for women in the construction trades. Hunte said these jobs are well-paying family wage jobs, but the hours are often rigid and inflexible for working parents.

“The expectation of trades people is really built on the idea the people have somebody at home taking care of home,” she said. Since these jobs are often contract based, employers can look for employees that fit the mold of the ideal construction worker, and choose not to hire parents who need flexibility.

“Women have to really go out of their way to prove that they can do the same work,” Redstone said. She cited this attitude as one of the reasons she left her carpentry work. “I think a number of women just get fed up despite the pay, or despite the genuine passion for working with their hands in any given trade.”

After teaching at Oregon Tradeswoman, Redstone started the Heart + Sparks Production company. She has produced films for the Huffington Post and Oregon Public Broadcasting. Last year, she and Hunte raised over $13,000 on Kickstarter to produce “Sista in the Brotherhood.” The film also received a grant from the Regional Arts and Culture Council.

The film’s production crew employed all women except for Hunte’s husband, who was available to fill a last-minute opening. The crew was also 50 percent women of color.

Recruiting and employing women of color on the crew was an obvious choice, Redstone said. Even though there are more women of color working in film than in the construction industry, the numbers are still fairly low.

“The more often that you can get women and women of color behind the camera, the more you are going to see that better representation in front of the camera,” she said.

For Hunte and Redstone, “Sista in the Brotherhood” is an opportunity to make people think about the built environment around them, and to consider the lives that have created the city structures.

“I always say I want people, when they're driving down the street, to start to look at who is building and asking do they see any women, how many people of color do they see, what jobs are they doing?” Hunte said.

For more information about the “Sista in the Brotherhood,” visit the film’s website.