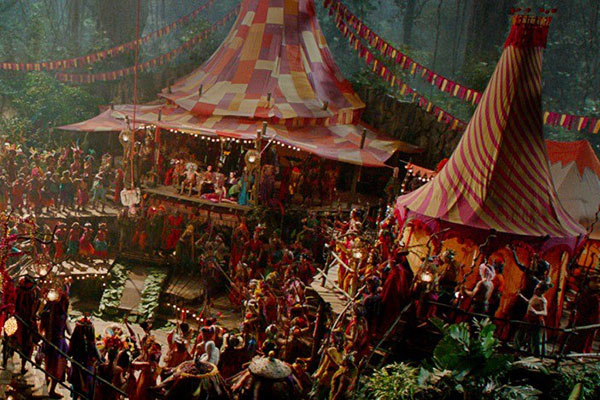 Everyone's familiar with Peter Pan, the much-beloved children's classic revolving around the magical adventures of a little boy who can fly and won't grow up. In fact, the fanciful character is so deeply woven into the cultural fabric that he has a psychological disorder, the Peter Pan syndrome, named after him, a pathology applied to people seemingly stuck in a state of suspended adolescence.

Created by Sir James Matthew Barrie, Peter Pan was first produced as a play in 1904 and adapted into an illustrated novel seven years thereafter. The enchanting fairy tale made its screen debut as a silent movie in 1924, with assorted remakes, sequels, spin-offs and animated versions being released over the ensuing generations.

Directed by Joe Wright (Anna Karenina), Pan, the latest incarnation, is a prequel very loosely based on the J.M. Barrie plotline. This special f/x spectacular is the brainchild of actor-turned-scriptwriter Jason Fuchs, who ostensibly felt free to speculate wildly about Peter Pan's roots. The film stars Levi Miller as Peter, and features an impressive supporting cast including Hugh Jackman, Rooney Mara, Garrett Hedlund and Amanda Seyfried.

At the picture's point of departure, we witness a newborn baby being very reluctantly deposited by his mother (Seyfried) on the doorstep of the Lambeth Home for Boys, an orphanage run by an order of nuns. Fast-forward a dozen years and we find Peter and his fellow foundlings sharing the misfortune of being under the thumb of a sadistic mother superior (Kathy Burke).

Furthermore, it's the height of the Battle of Britain, and the Luftwaffe's daily fire bombings of London during the Blitz have left the lads terribly traumatized. Obviously, Fuchs' anachronistic screenplay takes a few liberties, such as in setting the story during World War II, well after the source material was already written.

Nevertheless, the tale makes an incredible leap from reality into fantasy the night a flying frigate swoops out of the sky and starts plucking the kids right out of their beds and up into the heavens. Curiously, the ship's captain is not Hook (Hedlund), but Blackbeard (Jackman), the notorious British pirate who roamed the high seas in the early 18th Century.

Unfortunately, Blackbeard is no savior but a kidnapper intent on enslaving the youngsters in Neverland, a lair located in another dimension. However, here, Hook happens to be a benign figure who befriends Peter, along with Indian princess Tiger Lily (Mara) and the ethereal fairy Tinker Bell.

At this juncture, the movie morphs into an overstimulating, kitchen sink extravaganza serving up everything from dazzling, CGI chase scenes to catchy song-and dance tunes (ala "Smells Like Teen Spirit") to swashbuckling derring-do. A riveting roller coaster ride well-designed to enthrall tykes for two hours straight.