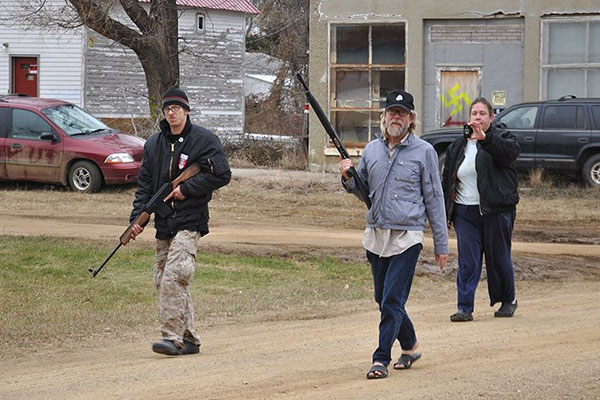 Does the name Craig Cobb ring a bell? It didn't for me either. But the notorious white supremacist is on the Southern Poverty Law Center's watch list of the Top Ten most dangerous racists in America. He also mentored Frazier Glenn Cross, the anti-Semite recently convicted of hunting for Jews during a deadly rampage around Kansas City in April of 2014.

Well, there aren't exactly a lot of cities likely to roll out a red carpet for his ilk, which explains why Cobb and his followers decided to settle in Leith, North Dakota. In 2012, they purchased their first piece of property in the tiny town of three square miles, at a time when only a couple dozen people resided there.

The hate monger's diabolical plan was to turn the quiet hamlet into a mecca for bigots, and to wrest control of the municipality's government via a combination of importing allies and scaring locals into leaving. After all, the real estate was cheap enough. He bought his first house for just $500, that's right just $500. Furthermore, there were excellent paying jobs not far away, thanks to the state's oil boom.

So, Cobb and his henchman, Kynan Dutton, moved in and immediately set about terrorizing their new neighbors by hanging big Confederate flags in front of their homes and brandishing shotguns as they strolled down the street spouting racist rhetoric. They proceeded to harass Leith's Mayor, Ryan Shock by disrupting city council meetings with chants of “Heil Hitler!” while routinely referring to Bobby Harper, the only African-American resident, as “boy.”

Despite the inveterate racists spouting rhetoric advocating the extermination of blacks and Jews, the tight-knit community would not be intimidated. Instead, they responded by employing tactics designed to force the invaders out before they could take root. And they enlisted the assistance of a nearby tribe of unamused Native-Americans in this endeavor.

Cobb and his minions soon found themselves being hounded by honking car horns outside their windows and confronted by angry citizens also armed to the teeth. Their cars were spray-painted with graffiti identifying them as Nazis, too. Eventually, the police found a good excuse to arrest Cobb and Dutton and, the next thing you know, their homes were burned to the ground while they were sitting behind bars.

A textbook primer on how a united community ought to respond to the arrival of racist bullies before the creeps have a chance to ruin the neighborhood.