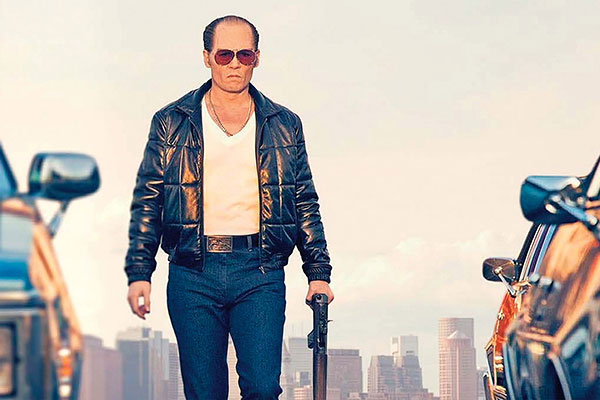 In the mid-1970s, James “Whitey” Bulger began rising through the ranks of South Boston’s Winter Hill Gang by knocking off all the competition vying for control of his tight-knit, Irish neighborhood. The power-hungry mobster subsequently sought to muscle-in on assorted illegal rackets being run by the Mafia in the city’s predominantly-Italian North End.

While in the midst of the ensuing turf war, Whitey was surreptitiously approached by John Connolly (Joel Edgerton), a childhood friend from Southie working for the FBI. Agent Connolly informed his pal that the Bureau had enough evidence to put him behind bars and throw away the key, though it was willing to look the other way in return for his cooperation as an undercover informant.

Bulger grudgingly agreed after establishing that he wouldn’t have to snitch on any of his associates, only on his cross-town rivals in the Angiulo crime family. However, Connolly further stipulated that no murders could be committed by any Winter Hill members once the unholy alliance was struck.

Of course, that was a little much to expect, given how there’s no honor among thieves, especially when it comes to a ruthless assassin like Whitey.

He merely saw the protection being afforded by the Feds as an opportunity to behave with impunity as he further expanded his spheres of influence.

The Machiavellian mastermind proceeded to embark on a bloody reign of terror during which Connolly and a fellow G-Man (David Harbour) found themselves being manipulated to venture to the wrong side of the law. When the truth finally came to light, the two agents were arrested as accomplices to Whitey who disappeared into thin air, landed on the FBI’s Ten Most

Wanted list, and yet still avoided apprehension for well over a decade.

Directed by Scott Cooper (Crazy Heart), Black Mass is a riveting biopic chronicling the infamous exploits of as chilling a character as you’re apt to encounter in the theater this year. Johnny Depp is at the top of his game, here, as Bulger, a very intimidating, larger-than-life monster without a functioning conscience. Cooper has the potential of doing for the three-time, Academy Award-nominee what he already accomplished for Jeff Bridges with Crazy Heart, namely, land the veteran thespian the coveted Oscar which has managed to elude him despite a brilliant career marked by a string of nonpareil performances.

Besides Depp, kudos are in order for much of the stellar supporting cast, especially Joel Edgerton, Kevin Bacon, Peter Sarsgaard, Dakota Johnson, Julianne Nicholson and Benedict Cumberbatch. Though the September back-to-school season is generally a harbinger of a weak slate at the cinema, the exceptional Black Mass proved to be a pleasant surprise and the first must-see flick of the fall.

View reviews for other movies opening this week.