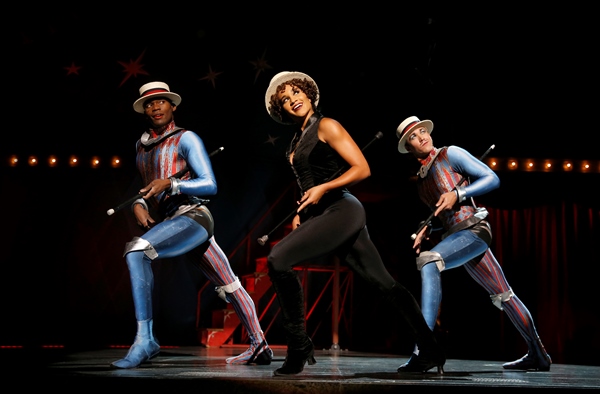 The 2015 season of Broadway in Portland brings the circus to town with the revival of the Broadway classic, Pippin, which opens at Keller Auditorium Sept. 22 and runs through Sept. 27. The Tony-winning musical tells the tale of a young man searching for the meaning of life. He soon falls in with a circus troupe who guide him on a surreal journey.

The Skanner News spoke with Gabrielle McClinton, who plays the master of ceremonies, the Leading Player. She pushes Pippin to be a player in her show and exacts punishment when he veers away from her.

McClinton spoke about the show, her role and what it means for her to be a performer. Here are excerpts of that interview, edited for space and clarity.

The Skanner News: How is the tour going?

TSN: You sing, you act and you dance. Which one of these arts do you feel closest to?

GM: I love them all equally, but I started as a dancer. I feel I am a very physical person, I feel very at home in my own body. Dancing came naturally to me. As I grew up and started taking lessons, I got more into singing and acting. There's a lot of acrobatics in the show. We got the opportunity to learn acrobatics and the acrobats had to learn singing and dancing.

TSN: Do you see a connection between his Pippin’s search for an exceptional life and those who perform in the theatre?

GM: He's searching for his meaning in life and what it means to be extraordinary. I honestly feel that we are all Pippin ‑- not just people in theater but everybody in general. Everybody who comes to the show is going to see themselves in the different journeys that Pippin goes on.

TSN: Some productions of Pippin have been criticized for being sanitized, compared to Bob Fosse's original direction. Is this revival closer to that production?

GM: We stay very true to what Bob Fosse created, but it is definitely a completely different production because of the added an element of circus. Actually, Bob Fosse was really interested in the circus, as well.

Director Diane Paulus and Gypsy Snider, who is in charge of the Seven Fingers Circus Troupe, put this together. They added the circus with the dancing and the singing and acting. It makes it more heightened and adds this edginess and darkness to Pippin. It brings it more to life and makes it really thrilling and exciting.

TSN: You play the mysterious and powerful Leading Player. She seems to have many roles, Pippin’s counselor,  the chorus, even a devil's advocate. What is your interpretation of the Leading Player?

Things get twisted when Pippin starts to take different road which doesn't go along with her plans. She's the master of ceremonies and used to controlling everything. It’s her goal to keep everybody entertained and to seduce the audience to keep this ship intact.

TSN: It sounds like a fun role to play.

GM: It is definitely the most challenging role I have ever had to play. There are so many layers to all the characters, especially her. She's dark and twisted and maniacal. But there is all of this inner stuff that's going on with her too. She’s a very multifaceted character. With the dancing and the singing and the acting, it just takes a lot out of you. It's a very energizing role and it requires a lot to lead this through and tell the story every night.

TSN: What made you want to be a performer?

TSN: What can Portland audiences look forward to in Pippin?

GM: It’s definitely going to be a really thrilling journey. There's so much to look at, with the sets and the colors and all the circus tricks and the dancing and the big choral numbers. It's definitely going to take you on your own personal journey. It's an exciting piece of theatre that isn't just entertaining because  you're seeing great dancing and singing and acrobatic tricks, it also has a very deep meaning, there's a lot of depth to the story that people are going to be surprised by.